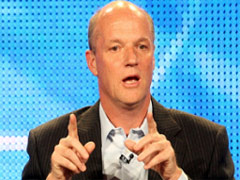 MSNBC boss Phil Griffin has sent around a memo to staff admitting the obvious: that 2014 was a very difficult year for MSNBC. But he blames technological change -- not the rejection of the MSNBC agenda at the polls. America is "leaning backward" at the moment.

“It’s no secret that 2014 was a difficult year for the entire cable news industry and especially for MSNBC,” Griffin wrote. “Technology is continuing to drive unprecedented changes across the media landscape – and we all should be taking a hard, honest look at how we need to evolve along with it.”

Jordan Chariton at The Wrap reproduced the memo and interpreted through their reporting on the “news” network with the ratings problems:

Griffin also expounded on sending the network out “on the road” and outside of Washington, D.C.; as TheWrap exclusively reported in November, to combat poor ratings, Griffin has embarked on a plan to steer away from too much political punditry, opting for an increase in original reporting on MSNBC.

Insiders familiar with the network’s strategy told TheWrap the pivot from solely covering the nitty gritty of D.C. politics from studios to thrusting talent into the places most affected by the politics is just a small part of a broader strategy the network is still developing. As speculated, that could include programming and talent changes in the coming months.

There’s no change planned from the ultraliberal pose – just an attempt to go Outside the Beltway a bit. Griffin pledged to “stay true to what we do best: covering the issues that matter to all Americans, advancing the conversation, and finding the stories that celebrate the unique spirit and strengths of our country.”

Liberals never channel a “unique spirit” of America. They want America to be more like European socialist states.

Griffin celebrated the “hallmark” shows that beat CNN, and forget beating Fox: “For the fifth consecutive year we are the number two cable network in prime for total viewers, and on a weekly basis, audiences are continuing to choose our hallmark programs, including Morning Joe and The Rachel Maddow Show, over CNN.”

MSNBC’s focus on Republicans “killing the black vote” and expelling all the illegal aliens must explain (for them) their following among the non-whites: “[I]n 2014 msnbc become the top-rated cable network for Hispanic viewers 25-54 during Monday-Friday primetime – growth that is especially crucial as we gear up for the next presidential election. For the fifth consecutive year, we were the number one cable network for African-Americans in demo and total viewers. Our African-American audience is double that of CNN’s and more than seven times that of Fox News.”