In Wednesday’s Washington Post Express, Post reporter Stephanie Merry laid out “Why Kathy Griffin is Risky Business” at the E! Network replacing Joan Rivers in the show “Fashion Police,” which is being scaled back to 17 episodes a year. Merry thought the big question was “How long can Griffin hang onto the job?” [This always reminds us of the late Noel Sheppard, who loved a good Griffin-bash.] 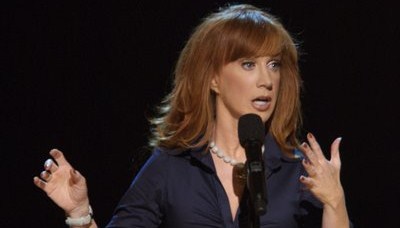 She is, of course, perfect for the gig. Her whole shtick is about making fun of celebrities, which she has done spectacularly well during stand-up specials and on her Bravo show, “Kathy Griffin: My Life on the D-List.” So picking apart red-carpet outfits will be no problem. But she also has a tendency to take things too far sometimes. Or, basically, all the time. Let’s look at some of her go-to gags that could jeopardize her future on “Fashion Police.”

Griffin believes the reason she was banned for years from the “Late Show With David Letterman” is because she curses like a sailor. Letterman ultimately lifted the ban, in 2009, after her Bravo show took off, but she clearly hadn’t learned any lessons from the black-listing. She behaved herself — sort of — during that first Letterman outing, but she dropped an F-bomb later that year during her annual New Year’s Eve show with Anderson Cooper on CNN.

It’s interesting that E! is hiring Griffin at all, considering all the pain she caused them in 2005, during a red-carpet special before the Golden Globes. At one point, out of nowhere, Griffin said: “We did hear a rumor that little Dakota Fanning entered rehab today, and we wish her the best.” This was not true, and Fanning, who was 10 at the time, was not pleased. (Or, at the very least, her handlers weren’t.) E! had to publicly apologize on its Web site and on air, and the network also donated money to UNICEF on Fanning’s behalf.

Here’s another gem involving Griffin mortifying Cooper: Last year, she made several references to his “sack” before dropping to her knees and attempting to give Cooper his “Christmas present.” Yikes. (And yet, CNN has announced that Griffin and Cooper will return this year for another round.) She seems to be upping the ante each year.

Merry listed a few more in the online article: “Making large, powerful groups very angry,” like Catholics and Scientologists. She remembered Griffin’s “suck it, Jesus” Emmy acceptance speech, when her speech began “A lot of people come up here and they thank Jesus for this award. I want you to know that no one had less to do with this award than Jesus. He didn’t help me a bit. If it was up to him, Cesar Millan would be up here with that [darn] dog.”

She also remembered “Stripping,” how Griffin took her dress off as a gag on a 2012 David Letterman appearance on CBS. “She had already done the same thing with Cooper a couple weeks before during their countdown special. Letterman rolled with it slightly better than Cooper did.”