Ed Morrissey at Hot Air ably announced that liberal reporters and analysts are breaking out the latest spin – that victory will be terrible for Republicans. I’d call it the Mary Tillotson special: after the GOP took the house in 1994, CNN’s Tillotson suggested this 52-seat landslide was bad news for 1996.

Morrissey calls it “the media’s Sour Grapes Index, in which analysts posit that a big win is really a loss, or that a loss is really a big win.” Alexander Bolton at The Hill offers the classic take, “Civil war looms for the GOP":

“The American people don’t want Republicans to become appeasers and supporters of a watered down Obama agenda.”

The problem for Speaker John Boehner (R-Ohio), Senate Minority Leader Mitch McConnell (R-Ky.) and other GOP leaders is that they will also face pressure to govern — which could involve cooperating with President Obama to keep the government operating and turn legislation into law.

Earth to Alexander: An objective reporter doesn’t define tax reform and Obamacare repeal as “not governing.” Only liberals that think “governing = more statism” do. Some might argue that Harry Reid’s pattern of abolishing a regular order of spending bills is “not governing.” Would Mr. Bolton have written in 2006 that Democrats wanting to pull our troops out of Iraq was "not governing"?

National Journal actually illustrated Norm Ornstein's article with an injured, bandaged elephant. The headline was "A Republican Senate Victory Could Splinter the Party."

Ornstein – a vicious hater of the Tea Party granted a wide berth in the liberal media – sees the possibility of talk-radio-driven impeachment, and also sees "ideas" only on the liberal side, and "obstructionism" in a conservative agenda: 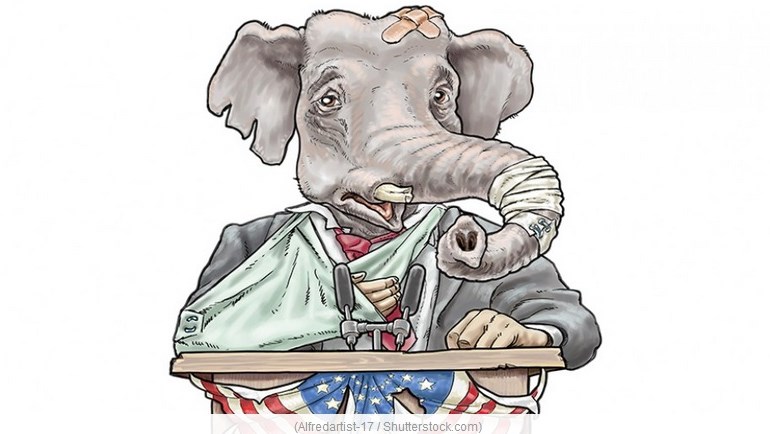 A few weeks back, Speaker John Boehner talked about his headaches, including having about 16 "knuckleheads" in his own caucus. There will be more Republicans in the next House—but more knuckleheads, too, maybe doubling the number. Boehner and the leadership team can likely stay intact, but not without some heartburn and not without making some promises to potential apostates about doubling down on domestic spending cuts and measures to thwart or embarrass Obama....

The desire of [Kevin] McCarthy and other GOP leaders to avoid a characterization of their party as the party of no—of obstructionism but no ideas—by showing an ability to govern, will come into conflict with a GOP base that wants to continue the take-no-prisoners approach that worked so well in 2010, and again, if this scenario prevails, in 2014. And the presidential campaign will give added traction to the primary and caucus voters who are dominated by the hardest of hardliners, and the collection of presidential candidates who will pound away against the Common Core, immigration legislation, any taxes, or any spending except for defense and the border....

Finally, I have to at least mention the “I” word. I have talked off the record to some aides to tea-party Republicans in the House, who say that they are getting a lot of push from their activist voters to impeach the president. They, like their leaders, know how catastrophic that would be for Republicans heading into 2016 and will do what they can to head off any such move by hotheads. But if we assume that the president, determined to enhance and extend his legacy, implements major executive orders on immigration and climate change, there will be howls of outrage from the base and many lawmakers, and the likes of Rush Limbaugh, Sean Hannity, Mark Levin, Erick Erickson, and Laura Ingraham will not be holding them back. More than likely, neither would Ted Cruz. Another challenge for House and Senate Republican leaders to keep their party from veering off the edge.

Our DNC-friendly media is not so willing to imagine the idea that Democrats, being thrust into the minority by a highly unpopular president, will waste the next two years with their own filibusters and obstructionism, leading inevitably to a Republican president in 2016. Civil war among Democrats? They're never willing to discuss it, even when it threatens to occur. That would be....unpatriotic?