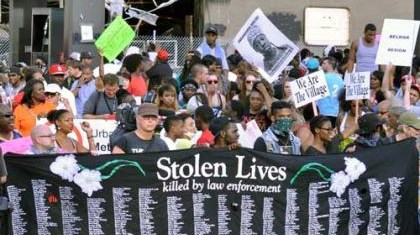 Count NPR as one of those national media outlets that just can’t really grasp the notion that the St. Louis Post-Dispatch and The Washington Post have ruined the narrative that “gentle giant” Michael Brown never wrestled police officer Darren Wilson for his gun. The finding of burns on the thumb “supports the fact that this guy is reaching for the gun, if he has gunpowder particulate material in the wound.”

On Thursday, this is how quickly NPR All Things Considered co-host Audie Cornish dismissed the inconvenient truth, trying to preserve the notion of an innocent victim: “Protests in Ferguson, Missouri heated up again this week. That's after a St. Louis paper reported the leaked findings of a second autopsy report on Michael Brown. It found that the 18-year-old black man was shot at close range by a white police officer.”

What? How can NPR just avoid these reports, or in this case, acknowledge there is a report and utterly avoid  elaborating on its contents? NPR correspondent Cheryl Corley went on to report on white residents of Ferguson who are upset at how the protests have painted the town as some kind of racial war zone when it’s not. One couple wondered why Al Sharpton and other black activists don’t get outraged about black-on-black crime.

STEVE INSKEEP: You could be forgiven for thinking the protests in Ferguson, Missouri, must be over by now. It's been two-and-a-half months since an 18-year-old was shot by police. Demonstrations against the shooting of Michael Brown do not make as much news these days, but they do continue. They continue even as more evidence emerges about the case.

DAVID GREENE: An autopsy leaked this week to the St. Louis Post-Dispatch says the 18-year-old was shot at close range. That contradicts the stories of some eyewitnesses of the shooting in Ferguson, Missouri. Such information might be of interest to investigators who are judging whether the shooting was justified.

STEVE INSKEEP: Protests continue alongside the investigation, in part because Brown's death has turned many young people in the community into first-time activists. Some told NPR's Cheryl Corley they really want to bring about change.

The evasion was more ridiculous in this story, since Corley interviewed anti-police activists. Corley and NPR never bothered to ask how the new story ruins the whole “gentle giant” narrative and their crusading against racial injustice from police officers:

CHERYL CORLEY: Now Moffitt, who is in his 40s, is an adviser to the younger members of the Lost Voices. He says the way authorities handled Mike Brown's death is one of the reasons why the protests will continue.

MOFFITT: These people don't care. And if we don't protest and stand up and show them that we care, that's why they're starting to listen now. I'm not saying that our protests are going to make them get us a conviction. We might not get him, but we're going to get some of these police officers. I promise you that....

CORLEY: While small nightly protests, primarily across from the city's police station, continue, [Ashley] Yates says MAU [Millennial Activists United] has turned organizing what's evolving into a national movement. She says they connect with other activists across the country to keep the issue of police brutality and social justice issues in the mainstream. They are also connecting the dots between the killings of unarmed people of color. Yates points, as an example, to the shooting death of Florida teenager Trayvon Martin.

Corley merely helps Yates insist that every police officer like Darren Wilson should be indicted, and who needs autopsy results to find the truth of what happened? Who needs to acknowledge The Washington Post reported more than six black witnesses support the police officer's account?

CHERYL CORLEY: But Yates sounds almost weary when she says she's taking a more long-range attitude about any indictment.

ASHLEY YATES: I'm hoping for the day that something like this happens - when a black life is taken, and we know they're unarmed. And we have six eyewitnesses and an entire neighborhood that can attest to what happened, and we don't ask the question, what happens if there's not an indictment? Because justice will be served the way it's supposed to.

CORLEY: And that's a hope young activists like her, along with both blacks and whites in Ferguson and elsewhere, should work to make a reality. Cheryl Corley, NPR News.

NPR clearly favors a narrative that imagines Ferguson as an opportunity for left-wing community organizing around the principle that police are part of an oppressive white capitalist power structure (much like the early Obama model in Chicago). Any facts that get in the way of that narrative are being, well, unjustly wrestled to the ground as uncooperative.