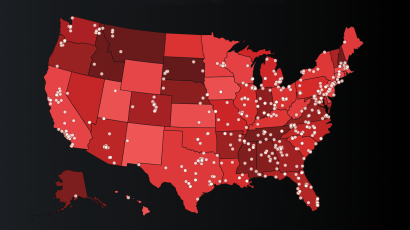 Social media companies appear to be tossing away their copies of SPLC’s bogus “hate map.” It took a while, but Facebook finally responded to the April 3 call from MRC President Brent Bozell and numerous other conservative leaders for the platform to cut ties with the Southern Poverty Law Center.

SPLC is a progressive direct mail giant — a lefty hate group that makes gobs of money screaming “Hate Group” at anyone to the right of The World Workers Party. These include mainstream Christian and religious freedom groups. With its fraudulent charges and “hate map,” SPLC has inspired more political violence than any conservative “hate” mongers it’s slandered. Last year, SPLC was forced to settle a $3.375 million lawsuit for falsely labeling a an anti-Islamist Muslim activist an extremist.

Despite all that, SPLC has been advising Facebook, Twitter, Google and other social media platforms. But SPLC’s last fig leaf of legitimacy fell away in March with termination of co-founder Morris Dees, resignation of president Richard Cohen and a public statement in which SPLC staffer Bob Moser slammed the organization as a “highly profitable scam” that “never lived up to the values it espoused.”

Two dozen staffers signed a letter alleging sexual harassment and racial and gender discrimination and SPLC announced it would undergo a “sexism and racism” review by an outside law firm. There was, as Bozell put it in his letter to the tech companies, “no longer any defensible rationale left for an organization to use them as a point of reference or in any advisory capacity.”

When it finally came, Facebook’s response wasn’t all that illuminating. Facebook’s Josh Althouse emailed this statement to the MRC on April 19:

The SPLC does not sit on our Safety Advisory Board, a group of organizations that we work with on issues related to online safety. We do not have any formal relationship with the SPLC. We speak with numerous organizations across the political spectrum to inform our policies. At the end of the day, we write and enforce our policies on our own, including who we identify as hate organizations and hate figures. These policies are very clearly laid out on our public-facing Community Standards site.

For what it’s worth, this is consistent with the description of the relationship Facebook spokeswoman Ruchika Budhraja gave the Daily Caller last June:

“We have our own process and our processes are different and I think that’s why we get the criticism [from the SPLC], because organizations that are hate organizations by their standards don’t match ours,” Budhraja said.

“That doesn’t mean that we don’t have a process in place, and that definitely doesn’t mean we want the platform to be a place for hate but we aren’t going to map to the SPLC’s list or process,” she said.

It’s also very much like the language Twitter used earlier in the month: “The SPLC is not a member of Twitter’s Trust and Safety Council or a partner the company has worked with recently.”

Certainly not a full-throated condemnation of SPLC (the kind it has itself traded in and grown fat off for so many years), but given the media’s long-time reluctance to abandon the left-wing hate group, it’s a start.