Univision anchor Jorge Ramos on Tuesday grilled Harry Reid about his completely unfounded rumor-mongering that then-presidential candidate Mitt Romney failed to pay taxes. On his weekly prime time show on Fusion (jointly owned by ABC and Univision),  America With Jorge Ramos, the Spanish and English language host demanded six times that Reid answer for his attack. Ramos pushed: "You said on the Senate floor that Mitt Romney had not paid taxes in ten years... But there was no evidence of that. Did you purposely lie?"

Reid, who in 2012 said that Romney "hasn't" paid taxes, admitted, "Of course he paid taxes." But the Senate Minority Leader asserted that the Republican hasn't proven himself innocent yet. Ramos pressed, "Who was that extremely credible source that you used?" The journalist followed-up, chiding, "But, in other words, you didn't lie?"

After Reid dodged, Ramos tried again: "But in a recent interview, Senator, you seemed to justify a possible fabrication when you said, 'Romney didn't win, did he?' Eventually, the anchor flatly declared, "It's clear there was no evidence."

This left Reid flustered and he reverted to the guilty until proven innocent argument: "Listen, there's an easy way to resolve this. Let him give us his tax returns." Ramos tried one last time, pleading, "So, no apologies to Mitt Romney?"

In December of 2014, the Univision host hit Barack Obama from the left and demanded to know if George W. Bush "betrayed American values" by allowing the CIA to "torture." Fusion  is partner network with ABC and Good Morning America on December 10 made sure to play part of that interview. Unsurprisingly, ABC wasn't interested in Ramos's grilling of Reid. 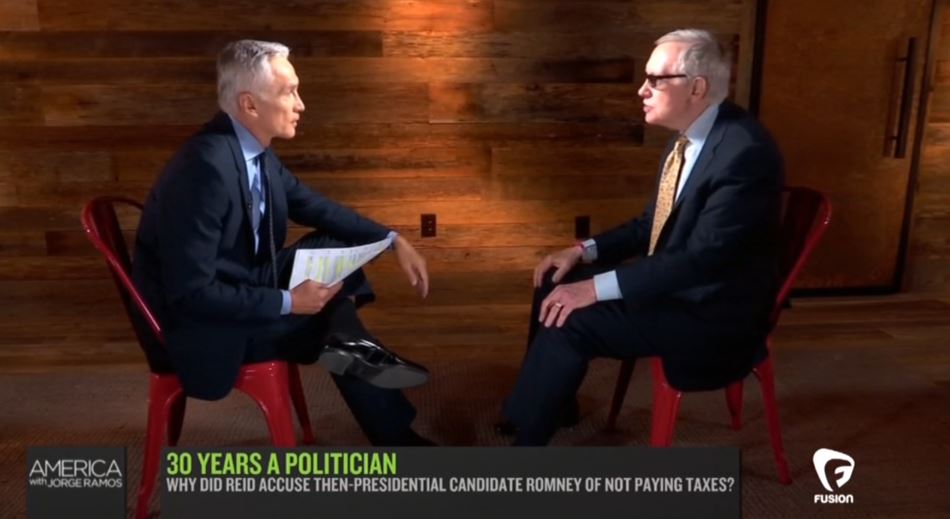 JORGE RAMOS: On August 2012, you said on the Senate floor that Mitt Romney had not paid taxes in ten years.

HARRY REID: The word is out that he hasn't paid any taxes for ten years. Let him prove that he has paid taxes. Because he hasn't.

RAMOS: But there was no evidence of that. Did you purposely lie?

REID: I'm really happy to respond to this because it's been blown way out of proportion, but blown my way. Mitt Romney, during the time he was running for president, refused to give us his tax returns. When I ran for the Senate in 1974, that was an issue, tax returns. This has been an issue of mine for a long time. And he never – He'll come some place – He'll say, "I always pay taxes." He refused to show the American people his tax returns.

RAMOS: He told CBS, "Let me say categorically, I have paid taxes every year, a lot of taxes."

REID: But that's a phony answer! Of course he paid taxes! What he didn't do is let us see his tax returns. Now, people and I said that many, many times. I said, "Someone who worked at Bain Capital, a couple of people told me he didn't pay taxes. But let him give us his tax returns. Let the American people judge that and that's what I've said.

MITT ROMNEY: Harry Reid really has to put up or shut up. All right? So, Harry, who are your sources?

RAMOS: Who was that extremely credible source that you used?

REID:   Well, it's more than one source. And I'm just like you, I don't have to give up my sources.

RAMOS: But, in other words, you didn't lie?

REID: No, of course – Mitt Romney – He can still take care of this issue. Let us see his tax returns! He has never done that!

RAMOS: But in a recent interview, Senator, you seemed to justify a possible fabrication when you said, "Romney didn't win, did he?" You sounded unrepentant as if –

REID: No, I have repentance because it was an issue that was important.

RAMOS: It's clear there was no evidence.

[Long pause as Reid is flustered.]

REID: Listen, there's an easy way to resolve this. Let him give us his tax returns.

RAMOS: So, no apologies to Mitt Romney?

REID: Oh, none whatsoever. None. Zero.