Hypocrite Chris Matthews Hates Hitler Comparisons, But Made Them Himself

MSNBC's Chris Matthews doesn't like it when people compare American politicians to Hitler and the Nazis. Unless, of course, he's doing it himself. On Tuesday, the liberal Hardball anchor assailed Republican Congressman Randy Weber for referencing Hitler in a tweet about Barack Obama.

Matthews fumed, "Wouldn't it be good for the country if politicians drop the whole Hitler thing and returned to saying, 'Well, we Republicans and those Democrats just have an honest disagreement on some big stuff?'" He railed at Weber: "Is this something in your brain that has you comparing our twice elected American leader with Der Fuhrer, whose aggression in Europe caused the world 50 million lives?"

However, on On November 26, 2012, while discussing the presidential election, guest Howard Fineman insisted that conservatives view African Americans and Hispanics as a scary, alien force. Matthews lectured, "The last guy to refer to the black auxiliary was Hitler." (See video montage above.) 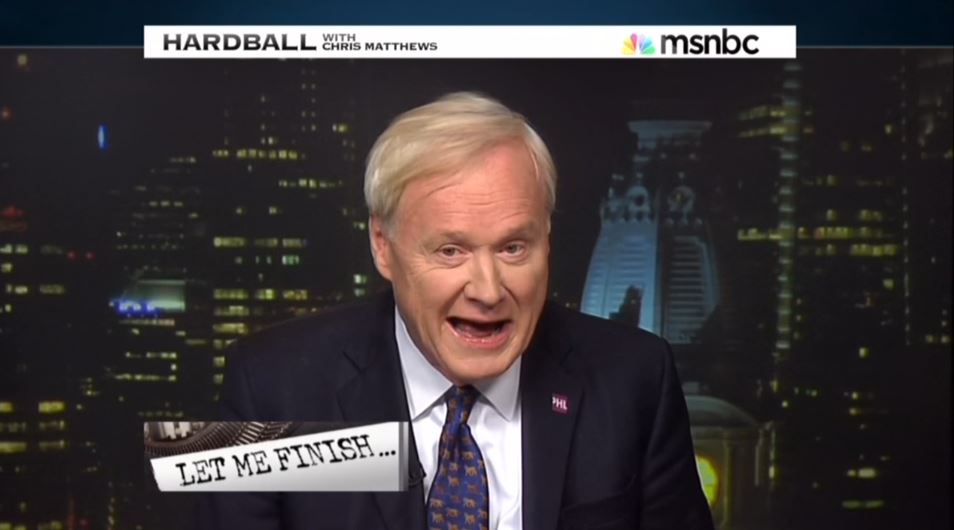 Matthews can't keep any sort of consistency on this issue. On December 17, 2013, he excoriated, "Ted Cruz has a formidable challenger in the hyperbole department these days when it comes to Hitler references." On that day, Nazi comparisons were bad.

Yet, on a March 22, 2013 special about Iraq, Matthews compared George W. Bush and the selling of the war to the actions of Hitler: "You know, the Nuremberg trials were primarily, before the Holocaust and all those other issues, was against people who launched an aggressive war. And this [Iraq] was an aggressive war."

It was Matthews who, on October 22, 2012, attacked, "Is it in society's interests for [a young woman's] boss to be able to be the birth control Nazi to decide who gets it and who doesn't?"

On November 7, 2012, the MSNBC anchor laughed at Nazi comparisons made by liberal comedian Bill Maher.

On Tuesday, Rachel Maddow and Chris Hayes mocked Congressman Weber for his tweet. Maddow sneered, "Also, [Weber] never meant to compare the President and Hitler in the tweet that consisted almost entirely of him comparing the President and Hitler." Ed Schultz, Matthews's liberal colleague on MSNBC, also railed against Hitler comparisons. Schultz, too, has a history of making Hitler comments about conservatives.

So, the logic of MSNBC is this: Don't ever make Hitler comparisons, unless they're about conservatives and Republicans.

A transcript of the January 13 Hardball segment is below:

CHRIS MATTHEWS: Let me finish tonight with this: "Even Hitler thought it was more important to get to Paris." Well, that was a Texas congressman's nasty knack, of course, on President Obama for his failure to attend the big rally in France this past weekend. Excuse me, Congressman. I know you're a Republican and the president is a Democrat and, I agree our country should have been represented better on Sunday. But Adolf Hitler? Is this something in your brain that has you comparing our twice elected American leader with Der Fuhrer, whose aggression in Europe caused the world 50 million lives?

I know, sir, that you've backed off your shot comparing Obama's failure to show up in Paris and Hitler blitzkrieg to get there in a hurry. But wouldn't this be a good time to think about that way you, Congressman Randy Weber, Republican of Texas, think about things? Wouldn't it be good for the country if politicians drop the whole Hitler thing and returned to saying, "Well, we Republicans and those Democrats just have an honest disagreement on some big stuff?"
Sarah Palin also got into this blasting of the President for his absence in Paris on Sunday. But remember her record, after running for governor of Alaska, winning and taking the oath of office, she simply skipped out on the second half of her term. Where Obama failed to show at this single, though, important event, she, the duly elected governor of the state failed to show for an entire two years? What do you call that? I think the term is taking French leave, and Madam Palin, you stand accused. So, don't throw snowballs if you're not ready to duck yourself. And that's Hardball for now. Thanks for being with us.