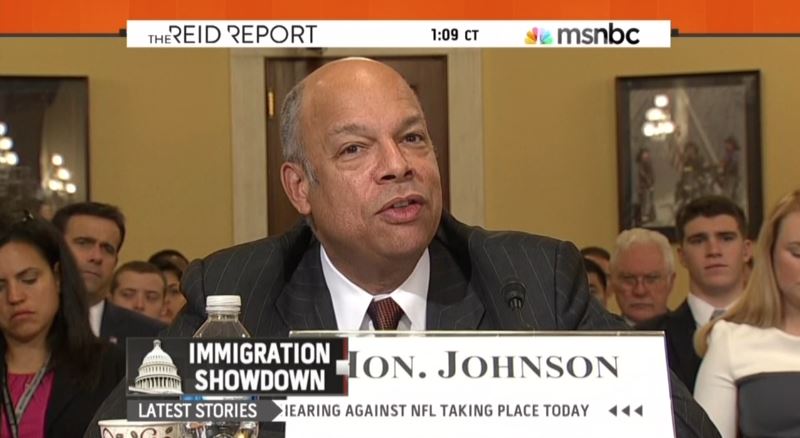 In theory, a major cabinet official going to Capitol Hill and being grilled by members of Congress would be news. But Barack Obama's Department of Homeland Security secretary faced withering questions on Tuesday and the networks ignored it. Another thing newscasts seem to like (particularly when it involves Republicans) is claims of hypocrisy. But when Secretary Jeh Johnson was forced to defend Barack Obama's flip flops on his executive order, ABC, CBS and NBC skipped the fireworks.

In a tense exchange, Barletta pressed:

“Mr. Secretary, is it true that the illegal immigrants who are granted amnesty will not need to comply with the Affordable Care Act?” Barletta asked.

“Those who are candidates for and are accepted into the Deferred Action program will not be eligible for comprehensive health care,” Johnson agreed.

“I don’t see it that way,” Johnson said.

“You don’t think any employers will see it that way?” Barletta asked.

According to the Washington Times, Secretary Johnson stumbled as he attempted to discuss the threat of terrorism with an open border:

Mr. Johnson acknowledged he is concerned about fraudulent applications for the amnesty, admitted his department still doesn’t have a firm way to measure border security and revealed that two self-identified members of terrorist groups have been released into the U.S. by order of an immigration judge.

The secretary said he would have preferred those two men be kept in custody but didn’t have a choice after the judge ruled. He said they have since fled to Canada, where they are requesting asylum, though his agents have lost track of them.

“I’m not sure of their exact whereabouts,” Mr. Johnson said.

This past March, the networks showed little interest in hearings on the IRS scandal. NBC only perked up over perceived rudeness to Democratic Congressman Elijah Cummings. On the March 5 Nightly News, Williams chided:

BRIAN WILLIAMS: In Washington today, a public and startling example of the kind of behavior Congress has become known for and Congress has become gridlocked over. It happened during a hearing about the politically charged issue of the IRS and accusations of targeting political conservative groups. Lois Lerner, the former IRS official at the heart of the scandal, again refused to answer questions, citing her Fifth Amendment rights eleven separate times in response to questions from Republican chairman Darrell Issa. But it is what happened after Lerner finished that is drawing attention. The top Democrat on the committee, Elijah Cummings of Maryland, was not allowed to speak. Then Issa hit the kill switch on Cummings' microphone.

During Tuesday's hearings, Secretary Johnson was grilled over Obama's  past claims that he doesn't have the "legal" authority for his executive order. Considering that, in the lead-up to the release of the executive order, CBS never mentioned the President's flip-flop, now would have been a good time for the network to correct that mistake. CBS did not.