Now online: the January 12 edition of Notable Quotables, MRC’s bi-weekly compilation of the latest outrageous quotes in the liberal media. This week, ABC's Barbara Walters pushes conservative philanthropist David Koch to stay out of politics: “Do you think it’s fair that just because you have billions of dollars, you can influence elections?”

At the same time, NBC congressional reporter Luke Russert mocks conservatives on Twitter: “The Kamikaze Caucus is alive & barking,” while The Daily Beast's Eleanor Clift says in 2015 she'll treat the GOP candidates with respect, “even though I think most of them probably belong in the clown car.” Highlights are posted below; the entire issue is posted online, with 22 quotes (four with video) at www.MRC.org.

“Do you think it’s fair that just because you have billions of dollars, you can influence elections?”
— ABC’s Barbara Walters to conservative businessman and philanthropist David Koch in a clip shown on This Week, December 14.

“Boehner wins Speakership for 3rd term in light of 25 #GOP defections. Never in doubt but the Kamikaze Caucus is alive & barking”
— NBC congressional reporter Luke Russert in a January 6 posting on Twitter.

Wretched America Will Be Even Worse Thanks to New GOP Congress

“The police killing unarmed civilians. Horrifying income inequality. Rotting infrastructure and an unsafe ‘safety net.’ An inability to respond to climate, public health and environmental threats. A food system that causes disease. An occasionally dysfunctional and even cruel government. A sizable segment of the population excluded from work and subject to near-random incarceration. You get it: This is the United States, which, with the incoming Congress, might actually get worse.”
— New York Times food writer Mark Bittman in a December 14 piece for the paper’s “Sunday Review” section.

Host Brian Lamb: “Who gets the maddest? Who protests the most when you’re about to put one of these four Pinocchios in the Washington Post?”
Washington Post’s Glenn Kessler: “I would say, just speaking as a general matter, I think Democrats tend to get a little more upset, because I think they have bought into the myth of the liberal media, and they kind of think that the media is on their side, whereas Republicans, they firmly believe in the myth of the liberal media.”
— Exchange on C-SPAN’s Q&A, December 28.

“For a long stretch, government spending cutbacks at all levels were a substantial drag on economic growth. Now, finally, relief is in sight. For the first time since 2011, local, state and federal governments are providing a small but significant increase to prosperity....Across the nation, state and local governments, Democratic and Republican alike, are spending on projects that were stalled....Even federal spending in some sectors is on the rise.”
— New York Times correspondent Dionne Searcey in a January 2 news story.

Mad Dash to Cuba Before It’s “Ruined” by Capitalism

Anchor Shepard Smith: “You know the fear among anybody who’s ever been there, or who cares at all about the Cuban people, as so many of us do — the last thing they need is a Taco Bell and a Lowe’s. I mean, we don’t need a-”
FBN’s Gerri Willis: “Toilet paper, toothbrushes, right? Toothpaste.”
Smith: “That’s it. But you know, it’s all one big idea and it all sort of comes together and, you wonder, are we about to get up in there and ruin that place?”
— FNC’s Shepherd Smith Reporting, December 17.

“Isn’t this Barack Obama’s ‘Tear down this wall, Mr. Castro’ — that kind of a moment? I mean, if change can take place with the Soviet Union, why can’t it take place with the Cuban people here?”
— Host Ed Schultz on MSNBC’s The Ed Show, December 17.

Of Course, Jerry Falwell Didn’t Murder a Bunch of People 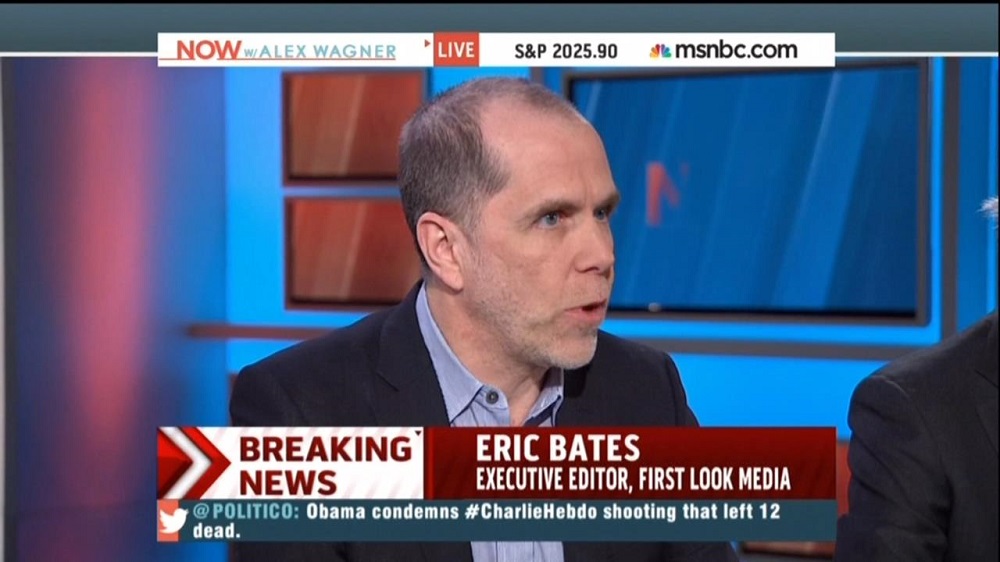 “This isn’t just Islamic extremism. If you go back to the ’80s — during the Reagan administration — when Jerry Falwell sued Hustler magazine for portraying him having, I believe it was drunken incest with his mother in an outhouse — again, in a visual form — and won a $150,000 court case against Hustler for that. It was overturned by the Supreme Court, I think, eight-to-zero. So you know, religious fundamentalists of all stripes and of nationalities have this penchant to say, we want to be able tell you what you can and can’t portray.”
— Former Rolling Stone executive editor Eric Bates on MSNBC’s Now with Alex Wagner, January 7, talking about the terrorist attack against a French satire magazine that left 12 dead.

The Inscrutable Politics of Paul Krugman

“As a Times columnist, I can’t do endorsements, so you have no idea which party I favor in general elections.”
— Left-wing New York Times columnist Paul Krugman in a December 29 interview with Vox.com’s Ezra Klein.

Next Year, I’ll Treat Those “Clowns” with Respect

“Treat the 24 Republicans considering running for president respectfully — even though I think most of them probably belong in the clown car. It takes a lot of courage to enter the arena of politics. You’ve got to stand up and have the courage to fail in front of a lot of people. So I’ll treat them all respectfully.”
— Longtime Newsweek correspondent Eleanor Clift, now a writer for the Daily Beast, announcing her New Year’s resolution on the January 3 edition of The McLaughlin Group.