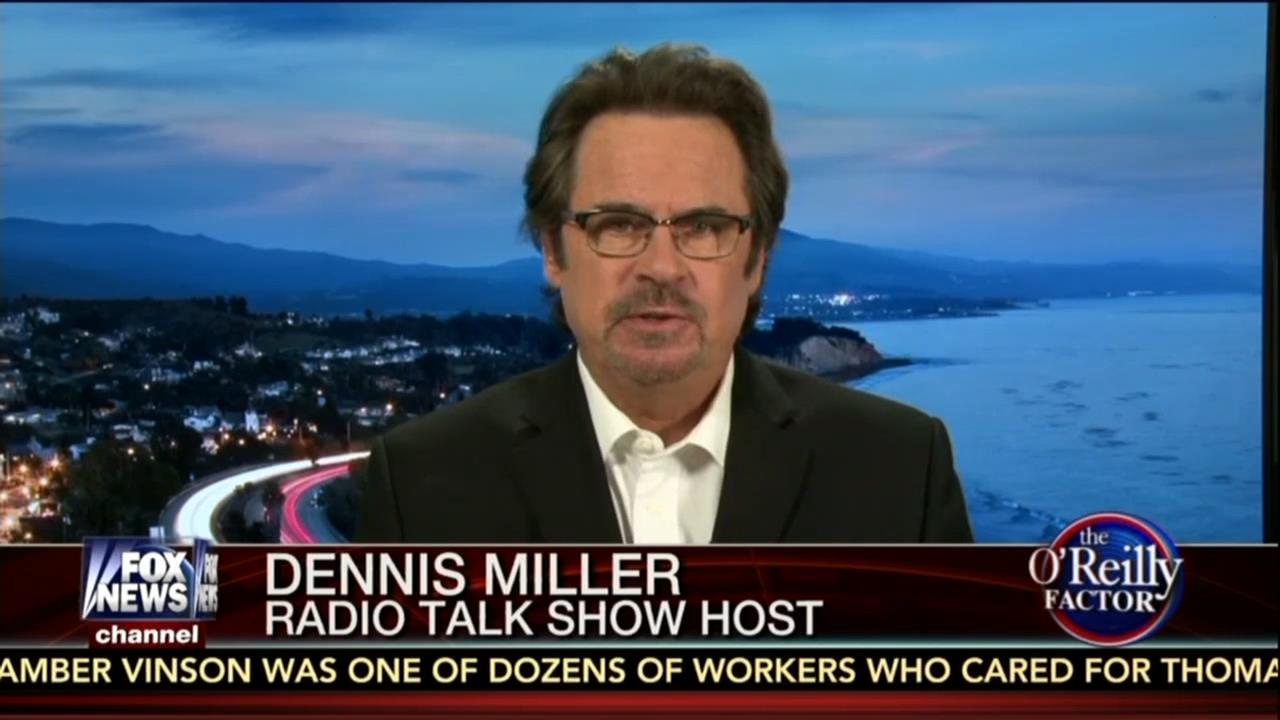 Appearing on FNC’s The O’Reilly Factor Wednesday night, Miller suggested Snyderman should be fired for her transgression, but rued “she’s probably put herself at the front of the list for Surgeon General.”

“She walked out of Ebola quarantine to get soup,” Miller underscored. “If Ed Murrow were there, wouldn’t he say, ‘We can’t have you, you understand, be our chief medical correspondent anymore. You lack credibility now.”

But, he admitted, “she’ll continue to be the chief medical correspondent....Nobody pays any price for anything anymore.”

On Monday’s NBC Nightly News, anchor Brian Williams read a statement from Snyderman in which she confessed only that “members of our group” violated the voluntary quarantine, which the New Jersey Health Department made mandatory on Saturday.

For his part, host Bill O’Reilly suggested he might limit Snyderman’s punishment to a mere suspension. One wonders how Snyderman would cover the story if a Fox News medical correspondent was caught in a similar violation during a public health panic.

Here’s the relevant segment of the October 15 exchange: 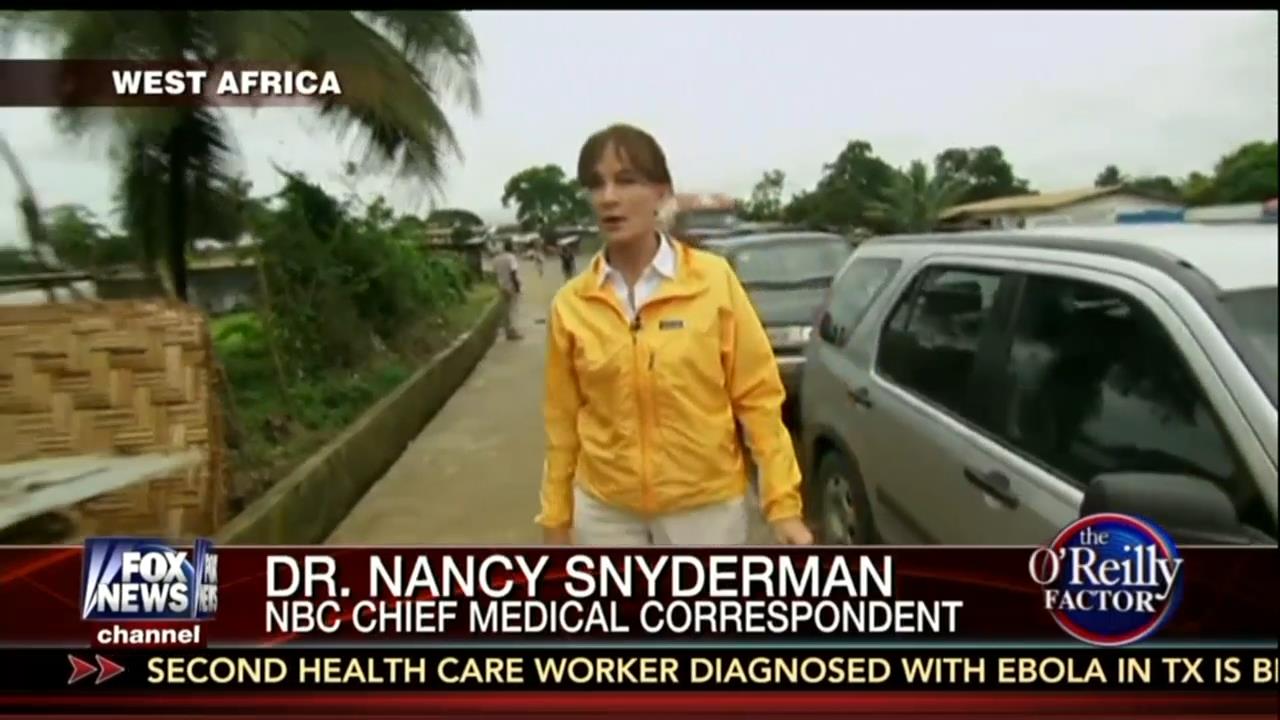 BILL O’REILLY: Thanks for staying with us, I’m Bill O’Reilly. In the “Miller Time” segment tonight, a very disturbing situation: NBC News medical correspondent Dr. Nancy Snyderman has issued a statement apologizing for breaking her Ebola quarantine. Dr. Snyderman, as you may know, and her crew are isolated because the cameraman they worked with, Ashoka Mukpo, has Ebola and is being treated in Nebraska.

Joining us now from Santa Barbara is Dennis Miller. So, what do you think about Dr. Snyderman going out for soup?

DENNIS MILLER: I want to taste that soup. That must be good soup, Billy. I think the restaurant ought to branch out into a canned pasta line called “Ebolios,” because evidently they are on to something over there.

I would like to say that Snyderman would fall into disrepair, might lose her job as a chief medical correspondent, but the simple fact is, Billy, she’s probably put herself at the front of the list for Surgeon General. And she might be our Ebola czar down the road if Sebelius isn’t brought back. She’s probably the frontrunner, Kathleen Sebelius, will be the Ebola czar, but — we are a screw up nation, Bill. We are a screw up nation.

O’REILLY: Yeah, I know, but the doctor should have understood that it’s a serious situation, in the sense that she is in the forefront of this whole deal. And that she, you know, to leave the quarantine she was ordered under, not in a legal way though, but saying, look, you can’t go out because you might, possibly, infect someone, to get soup. She could have sent somebody out for soup, Miller.

MILLER: But she didn’t. 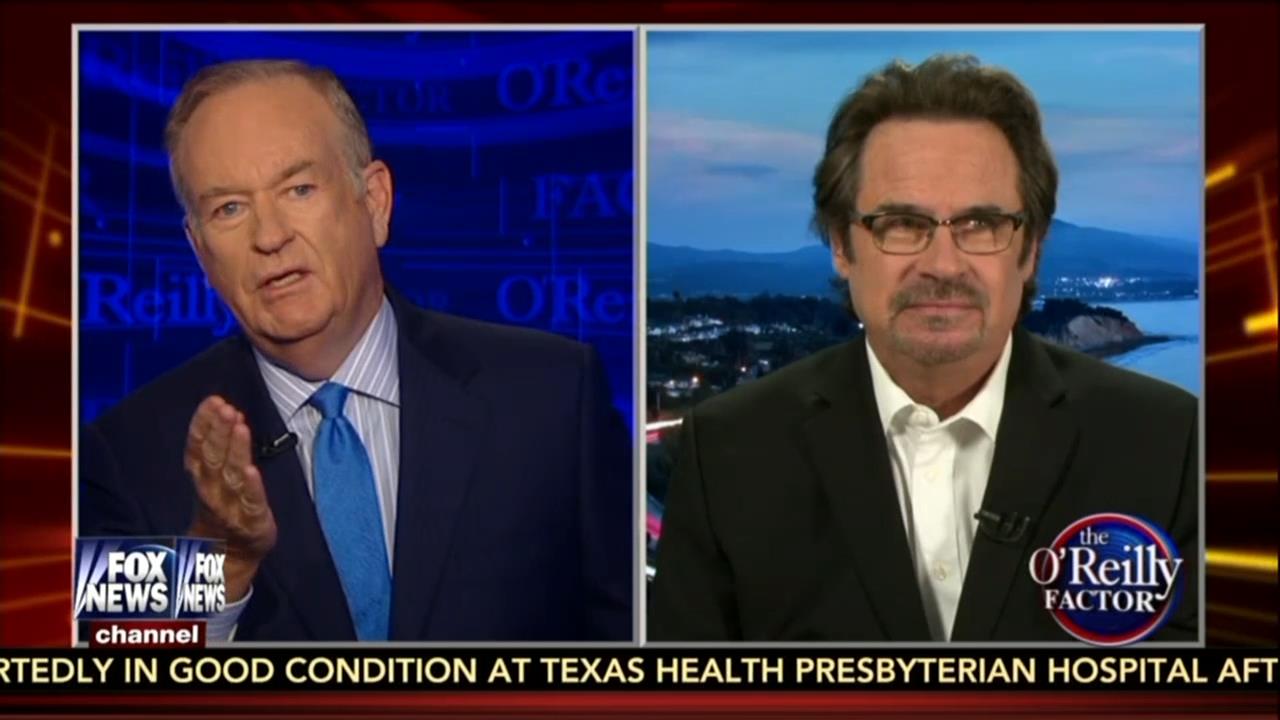 MILLER: I don’t know about that Bill, but shouldn’t she be fired?

O’REILLY: Interesting? Shouldn’t she be fired? I don’t know exactly.

MILLER: Well, she is the chief medical correspondent.

MILLER: She walked out of Ebola quarantine to get soup. At the very least, wouldn’t you — if Ed Murrow were there, wouldn’t he say, ‘We can’t have you, you understand, be our chief medical correspondent anymore. You lack credibility now. You walked out of a – ’

O’REILLY: No. The credibility doesn’t mean anything, right. I see what — I hear what you are saying. Maybe I would have suspended her. I don’t know if I would have fired her.

MILLER: Billy, you know, this whole thing is really. We’re not, you know how they say an NFL team or a Major League Baseball team, can’t throw the switch in the playoffs? We can’t throw — we are in the playoffs now. This is the big league. This is something that makes people’s eyes bleed. And we don’t have it together anymore in this country.

O’REILLY: Now, that’s for sure.

MILLER: And now we are at Code Red and I don’t think we are going to be able to deal with this. I don’t know what will happen. I’m not going to get Beckian with you. But let’s face facts: We are a screw up nation at this point. Nobody pays for anything. She’ll continue to be the chief medical correspondent. I mean, there is — nobody, you know, pays any price for anything anymore.