Now online: the September 8 edition of Notable Quotables, MRC’s bi-weekly compilation of the latest outrageous quotes in the liberal media. This week, NBC tries to cover for Obama's chaotic statements on ISIS, with NBC's Chuck Todd straining to explain the President's "no strategy, yet" blunder even as Nightly News anchor Brian Williams absurdly claims Obama was “clear and unambiguous” when he said he wanted to "destroy" ISIS, then moments later said his goal was to make them a “manageable problem.”

Also, journalists slap Burger King as an unpatriotic defector because it will pay Canada's lower corporate tax rate after a merger deal, and an MSNBC contributor starts a sentence with: “I ain't saying Obama is Jesus, but...” Highlights are posted below; the entire issue is posted online, with 19 quotes (two with video) at www.MRC.org. 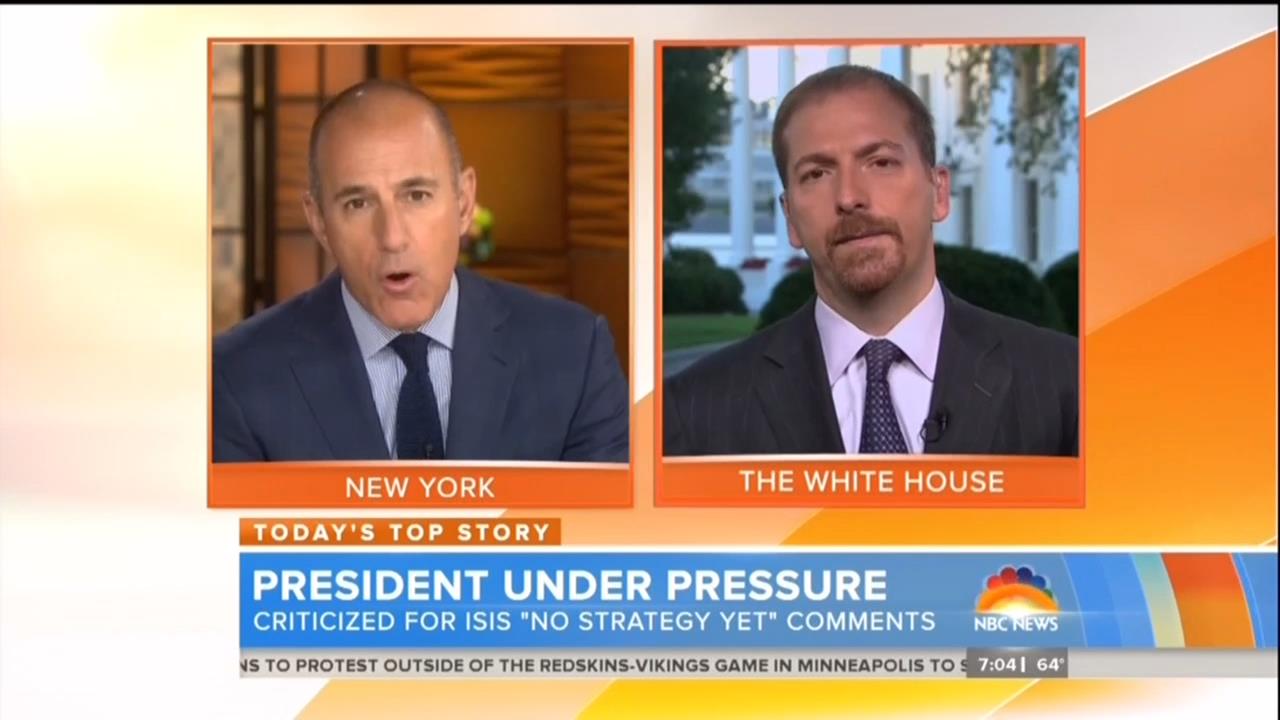 Co-host Matt Lauer: “Good morning. No strategy? The President taking heat for saying his administration has yet to develop a plan to deal with ISIS militants in Syria....Critics pounced, Chuck. Did they take his words too literally, or did the President admit there’s no plan...?”
NBC News political director Chuck Todd: “Well, the answer to both questions is ‘yes.’ The White House certainly is trying to spin back the President’s words saying, ‘Hey, you know, yes, they were a little blunt.’ They wish he would have worded it differently, but they remind all of us, including me, they were responding to a question specifically having to do with the role of Congress, ‘Did he need to go to Congress to get legal authority for this,’ and he’s saying, ‘We don’t have a strategy.’ They’re saying, ‘We don’t have a plan yet exactly of the targets that we want to do in Syria to then determine which legal course of action was necessary with Congress.’”
— NBC’s Today, August 29.

Only Brian Sees Obama as “Clear and Unambiguous”

“After the beheading of a second American now by ISIS, for all those who may be wondering if the U.S. is going to rise up, take the bait and get into the fight to root them out, the answer today from both the President and Vice President appeared to be clear and unambiguous.”
— Anchor Brian Williams starting off the September 3 NBC Nightly News.

Anchor Scott Pelley: “Tonight, President Obama on the ISIS threat.”
President Barack Obama: “Our objective is clear.”
Pelley: “But is it? ...Mr. Obama, who was criticized for not having a strategy for attacking ISIS bases in Syria, sent conflicting signals today....”
— Opening the CBS Evening News, same night, talking about the news conference where Obama said he wanted to “destroy” the terrorist group, then said his goal was to make them a “manageable problem.”

Fill-in host Krystal Ball: “These are brutal, murdering terrorists, right? Whether we waterboarded or not, they would be engaging in horrific acts. But when we do things like waterboarding, that the President has called torture, when we do things that are against our own principles, we hand them an easy piece of propaganda.”
MSNBC terrorism analyst Evan Kohlmann: “Yeah, because look, how can they justify this otherwise? They can easily justify it now because, if anyone questions them, they point to Abu Ghraib photos. They point to Gitmo. If they didn’t have these issues to point to, it would be very, very difficult for them to justify treating hostages like this.”
— MSNBC’s Ronan Farrow Daily, August 29, talking about a report that American journalist James Foley was waterboarded by his ISIS captors before he was beheaded.

“There may have been worse times for the United States to have a completely dysfunctional political system, but I can’t think of one offhand. One of our two major political parties has rendered itself insane....The world doesn’t need the United States scrambled and paralyzed by the kind of petty vandalism that has been practiced since 2009. Look at the Middle East. Look at Russia. Look at the dying countries of west Africa. Has all of that been worth it, just to make a centrist Democratic president unable to govern according to his twice-bestowed mandate? How much death is enough?”
— Esquire’s Charles Pierce in a September 2 blog post.

“Tonight, an American original is under fire. Burger King, home of the Whopper, accused of doing something a lot of Americans question: defecting, heading north of the border to Canada, and saving a lot of tax money.”
— Anchor Diane Sawyer on ABC’s World News, August 26.

Co-host Gayle King: “Billionaire investor Warren Buffett is facing criticism this morning for his role in the Burger King takeover of Tim Hortons. The fast food giant confirmed yesterday it’s buying the Canadian coffee and doughnut chain for $11 billion. Now this deal is being financed with $3 billion from Buffett’s company, that’s Berkshire Hathaway....”
Fill-in co-host Anthony Mason: “As somebody once said, Warren Buffett is a capitalist before he’s a patriot.”
— CBS This Morning, August 27.

“He [Warren Buffett] is underwriting this whole shift of Burger King up to Canada to avoid paying taxes. Which is he? Is he for more progressive taxes of the wealthy, or is he for finding ways to get out of paying taxes?...You know, we used to call these guys ‘pigs’ back in the ’60s. They only liked America because it was a good place to make money.”
— Host Chris Matthews on MSNBC’s Hardball, August 27.

“They [Republicans] are still being hurt by remarks that were made by some of their candidates in the last cycle regarding rape. It also has to do with policy. They have moved the abortion debate into birth control. This is a huge step where women — that’s a threshold issue for women. That’s about birth control, controlling your life. This is being in control of your life. And they want to talk about taking that away?”
— Bloomberg News deputy managing editor Jeanne Cummings on MSNBC’s Andrea Mitchell Reports, August 28.

The “Travesty” of Al Sharpton Acting Like a Journalist

“This is a travesty. You have Sharpton delivering a pretty political speech at the funeral today....And now, you have the acknowledgment by Sharpton that he is the conduit, he is the go-to guy for the Obama White House on Ferguson. It is amazing to me — this just reeks that MSNBC thinks this is acceptable....I covered Al Sharpton in New York when he was peddling the false gang rape claims of Tawana Brawley, and he told me afterwards that he still believed her. I covered him when there was a racial murder in Bensonhurst, Brooklyn and he said that if there was an acquittal, blacks would burn this town down.”
— FNC MediaBuzz host Howard Kurtz on The O’Reilly Factor, August 25.

MSNBC contributor Michael Eric Dyson: “You know, I’m a Christian preacher, and God finally said, ‘Look, I can’t send nobody else. I got to go myself.’ And I ain’t saying that Obama is Jesus, but for many of his followers he is. But I’m saying, ‘Show up, dog, and show us you are seriously committed to the interests of your people, because your presence says something even louder than your words.’”
Host Melissa Harris-Perry: “I think we’ve got to go, Reverend Dyson, because you just made the sentence, ‘I’m not saying Obama is Jesus,’ and I don’t want to get written up for that.”
— Exchange on MSNBC’s Melissa Harris-Perry, August 23, as Dyson argued that Obama needed to personally go to Ferguson, Missouri.