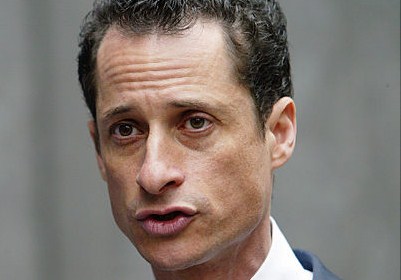 Anthony Weiner (aka Carlos Danger aka Mr. Abedin) has a well deserved reputation for, uh, flashing. However, his most significant flash of all came in the form of a Business Insider op-ed in which the husband of Hillary Clinton's closest personal aide, Huma Abedin, flashed their campaign plan to deligitimize the candidacy of Bernie Sanders for the Democrat presidential nomination and, if necessary, his delegates at the convention.

Your humble correspondent has suspected for weeks that the Hillary campaign would ultimately try to toss out many if not most of the Sanders delegates at the Democrat convention next year due to the fact that Sanders is a Socialist and is not registered as a Democrat. Weiner pretty much confirms this suspicion in his latest flash from deep within the recesses of the Hillary campaign:

Sanders has been drawing crowds of thousands at his rallies and is quickly becoming the main primary rival of Democratic frontrunner Hillary Clinton. I totally get Bernie Mania. However, I’m deeply conflicted about it.

My wife works for Hillary so there’s that. But I’m also torn because I don’t really understand what he is doing.

I bet you understand that he is a threat to the robotic Hillary campaign, thus the need for this op-ed from you to lay the groundwork for getting the Sanders campaign dumped on technical grounds.

Still, I have one major question for Bernie. What exactly does he think he’s doing in a Democratic presidential primary? Why is he asking for the nomination of a party he always avoided joining?

...After a career of steadfastly insisting that the Democratic party was not his home, now he wants to not only be a member of the party but its standard bearer? What changed?

Is Bernie’s newfound party affiliation just a practical decision to run in a party that can win rather than risk being a Nader-esque spoiler on a third party line in November? That’s a fair calculation, but doesn’t it wipe away Bernie’s three decades of standing as a principled Socialist?

Many times over the course of his career Bernie has repeated the line that his independence made him more able to speak truth. He argued forcefully that being a Socialist was his identity and not function of political expediency. Well, duh, nobody chooses to be a Socialist to smooth their political path. Yet, as 2016 approaches, here he is filing papers all over the country presumably declaring himself a member of the Democratic Party.

Thank you, Carlos Danger, for flashing a sneak preview of Hillary's game plan: delegitimize the candidacy of Bernie Sanders and ultimately even the right of his delegates to even vote at the Democrat convention next year should that be necessary for Hillary to win the nomination. So all you Bernie supporters on the left at places such as the Democrat Underground where your own founder has kept his financial ties to the Hillary campaign secret, don't be too surprised when the rug is pulled out from under Sanders for the reasons laid out by Huma Abedin's husband.