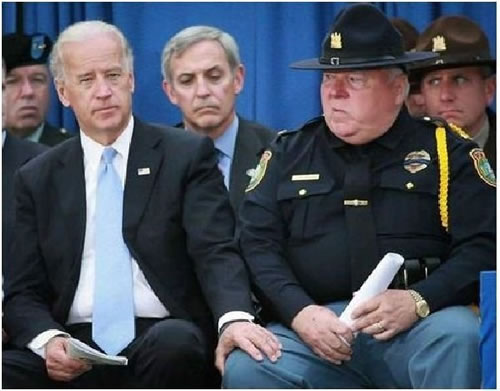 So what could be creepier than inappropriately placing your hands on the wife of a new cabinet official? How about inappropriately placing your hand on the leg of a gruff police chief during a solemn ceremony? Joe Biden did both but the first act is all over the news and the classic photo of the latter was buried by the mainstream media. Why? The reason seems to be timing. It is okay now to have a laugh at the expense of Biden since his days in office are numbered and few, perhaps not even Biden himself, believe he has any chance of being nominated for president in 2016.

However, the incredible photo of Biden with his hand on the leg of W.C. Fields lookalike, New Castle Police Chief Kevin McDerby, at the Delaware Law Enforcement Memorial ceremony in Dover was taken taken on May 3, 2010. That date gives us a clue as to why the incredible photo went down the memory hole.

At that time it correctly appeared that Joe Biden would remain on the Democrat ballot with Barack Obama in the 2012 election. Therefore mockery of Biden was still somewhat toned down and this photo had elements in it that made for some great mockery starting with the glower on the face of Chief McDerby as Biden's hand rested upon his leg. Adding to the comedy perfection of the photo is the man sitting directly between and behind them staring down at the creepily misplaced hand. The finishing touch is the Steve Carell looking officer on the right with eyes cocked sideways appearing to stare in extreme disapproval at Biden. Of course, there is also Biden himself seemingly oblivious to the silent drama surrounding him. Is there any doubt that this photo would have still been frequently featured in the MSM if the hand had belonged to another vice-president named Dick Cheney? Oh, and in case you think the photo is just too perfect and was photoshopped, it's not. Other pictures have been found of the same event taken at different angles.

Exit question: Now that it is "safe" to make fun of Joe Biden, does the photographer of the picture deserve to be awarded a retroactive Pulitzer?