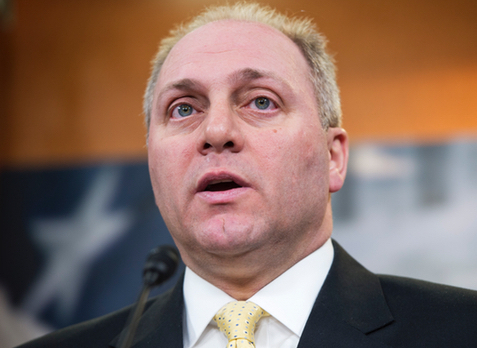 Only one problem is that it is most definitely not a fact when the real facts are examined. This is something Politico neglected to do when publishing a smear job on Scalise. Whether one politically supports or opposes Scalise, he doesn't deserve being smeared over something that didn't happen. This reportorial crime against basic journalistic ethics was committed by Politico perps John Bresnahan and Jake Sherman. Here are their flat out declarations about something Scalise supposedly did despite facts to the contrary:

The scandal over Louisiana Rep. Steve Scalise’s 2002 speech to a white supremacist group has so badly damaged his image inside the House Republican Conference that he faces serious questions over his political future, according to interviews with multiple aides and lawmakers — including some Scalise allies.

Not content with one mere smear, they go for an encore:

...Scalise survived the initial media frenzy over his speech to the European-American Unity and Rights Organization, an extremist group founded by Duke.

Boys and girls, how tough is it to perform a Google search? No sweat, right? And a Google search of Steve Scalise for the past week quickly reveals facts that Politico seems to have purposely ignored because it didn't fit the narrative myth they were trying to spin. Such a search reveals that liberal website Slate found two eyewitnesses from 2002 who claim that Scalise did not speak at the white supremacist event and the reason for the confusion. Backing up the eyewitnesses is documentary evidence unearthed by the Weekly Standard.

So will Politico issue a correction to their highly flawed story? Don't hold your breath but while we wait perhaps we can inspire them to do the right thing by serenading them with the "Scalise" song written to the tune of Rawhide with lyrics by my DUmmie FUnnies "co-conspirator," Charles Henrickson.

Now follow the bouncing ball and a one and a two and...