Pundit Charles Pierce: After Charlottesville, Republicans No Longer Can ‘Have It Both Ways’ on Race 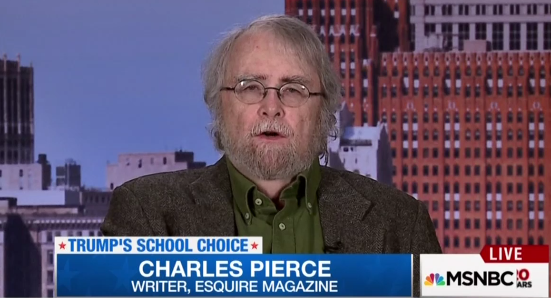 On Saturday afternoon, an act of racist terrorism was committed in Charlottesville, Virginia. Among those responsible, according to Esquire’s Charles Pierce, were Ronald Reagan and George H. W. Bush.

Pierce argued that what happened in Charlottesville was far from an aberration (bolding added):

The modern conservative movement -- born of the Goldwater campaign, nurtured by millions of dollars from corporations and rightwing sugar daddies, sold day after day on millions of radios and on its own TV network -- shoved the Republican Party right where it was dying to go anyway. These were institutions whose job it was to isolate this encroaching dementia from afflicting our politics in general.

If [Republicans] merely wanted change, they had 16 other [presidential] candidates to choose from [in 2016]. But that wasn't what got them out to the rallies, to bathe in that dark energy and chant their imprecations.

That dark energy, Pierce argued, now emanates from the White House: “A lot of what [the Trump] administration is doing comes from the same place in our history out of which James Fields, Jr. and his automobile came barreling in the summer sunshine of a Saturday afternoon. The administration still employs Kris Kobach for the purpose of suppressing minority voters. The administration is still in court defending the rights of oppressed white college applicants. Jefferson Beauregard Sessions III is still the attorney general…Everything is fluid, and everything ought not to be. Not like this. Not in the 21st century. We settled some things in the last century that should have been settled for good.”

As for Reagan’s August 3, 1980 speech at the Neshoba County Fair, this piece offers background and an excerpt, both of which suggest that Pierce’s characterization of Reagan’s remarks is misleading.