Paul Waldman Rant: If Hillary Runs, Can GOP Refrain From 'Fantasies About Torturing and Killing Her'?

Republicans, the American Prospect's Paul Waldman suggested Tuesday, are a bit like Spinal Tap's Nigel Tufnel inasmuch as they "can't seem to keep themselves from...turning the accusations up to eleven" on matters involving Hillary Clinton.

Waldman discussed Karl Rove's recent "traumatic brain injury" comments about Hillary and then transitioned to the broader issues of GOPers' "infinite loathing" for HRC and its implications for the 2016 presidential campaign, during which Waldman predicts Hillary will be the target of Republican "outbursts...more shocking" than Rove's. 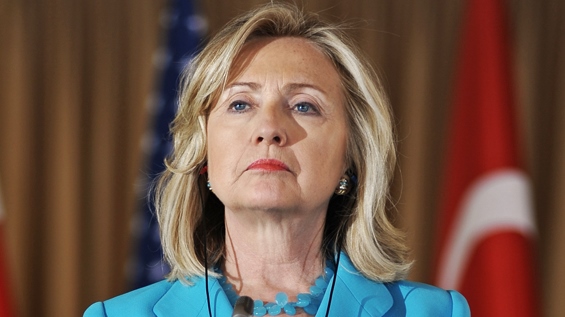 It's interesting that Waldman would decry Rove spreading wild speculation about Hillary's health, and then turn and speculate wildly about what Tea Party activists might say. From Waldman's post (emphasis added):

Clinton's actual health, like that of every other potential presidential candidate, is certainly a legitimate matter for discussion. But when it comes to this particular candidate, Republicans can't seem to keep themselves from taking any issue and turning the accusations up to eleven. It isn't enough to say that, since she'll be 69 when she would take office, we should ask whether she's still sharp, just as we did with Bob Dole and John McCain, who were even older. They have to go to brain damage. It isn't enough to say that Benghazi demonstrates that security at American consulates under her watch as secretary of state wasn't what it should have been, and therefore she bears ultimate responsibility for what happened there. They have to imagine a nefarious conspiracy, and schedule untold hours of hearings to uncover it-hearings that will, in the end, reveal nothing horrible about Clinton's actions, but will almost certainly make them look like fools.

The louder and more desperate those charges get, the more they reflect poorly on the ones making them. As I wrote earlier today over at the Washington Post, the single greatest challenge for Republicans in 2016 could be whether they can control their infinite loathing for Hillary Clinton. Because there will be outbursts, and ones much more shocking than this. Some Tea Party congressman is going to indulge his fantasies about torturing and killing her. Some right-wing radio host is going to go off on a rant so misogynistic and vulgar that even Republicans are going to have to distance themselves from it. Some surrogate for the GOP nominee is going to whip up a crowd into a frenzy of snarling faces and shouts of hate. There will be a drumbeat of sexism and violent rhetoric and appalling signs waved at rallies. The question is how far it all goes, and how good a job the wiser Republicans do at containing it.

Because they do want some of that hatred, just not too much. They want their people agitated and angry and afraid, so they volunteer and contribute and keep the energy up...They want just enough fuel to keep the engine going smoothly forward, but not so much that it overheats and explodes.

But once it really gets moving, they may have no way of stopping it.

[I]t isn't as though Republicans have any lack of things they'd like to use to attack Hillary Clinton. And as the smart ones among them understand, there's a fine line between keeping Clinton under constant pressure and letting their venomous loathing of her get out of control and redound to her advantage.

It's almost inevitable that at some point during any campaign involving Clinton, the Republican crazy train will run off its rails. The hatred she inspires among the GOP base, and their willingness to believe almost anything about her, simply cannot be overestimated. We're going to see multiple occasions when conservative media figures or Republican politicians say things about Clinton that are so vicious or so unhinged (or both) that they grab the media's attention, generate sympathy for her, and undermine the Republican candidate's cause. Some of those over-the-top attacks will be sexist, others will traffic in conspiracy theories, but they will definitely happen. The hearings of the select committee on Benghazi, and the response they get in conservative circles, will offer an early taste.