On CNN's Reliable Sources on Sunday, Vox.com's Ezra Klein lamented the attention President Donald Trump continues to receive, whining that his rallies and tweets are crowding out "other important issues." 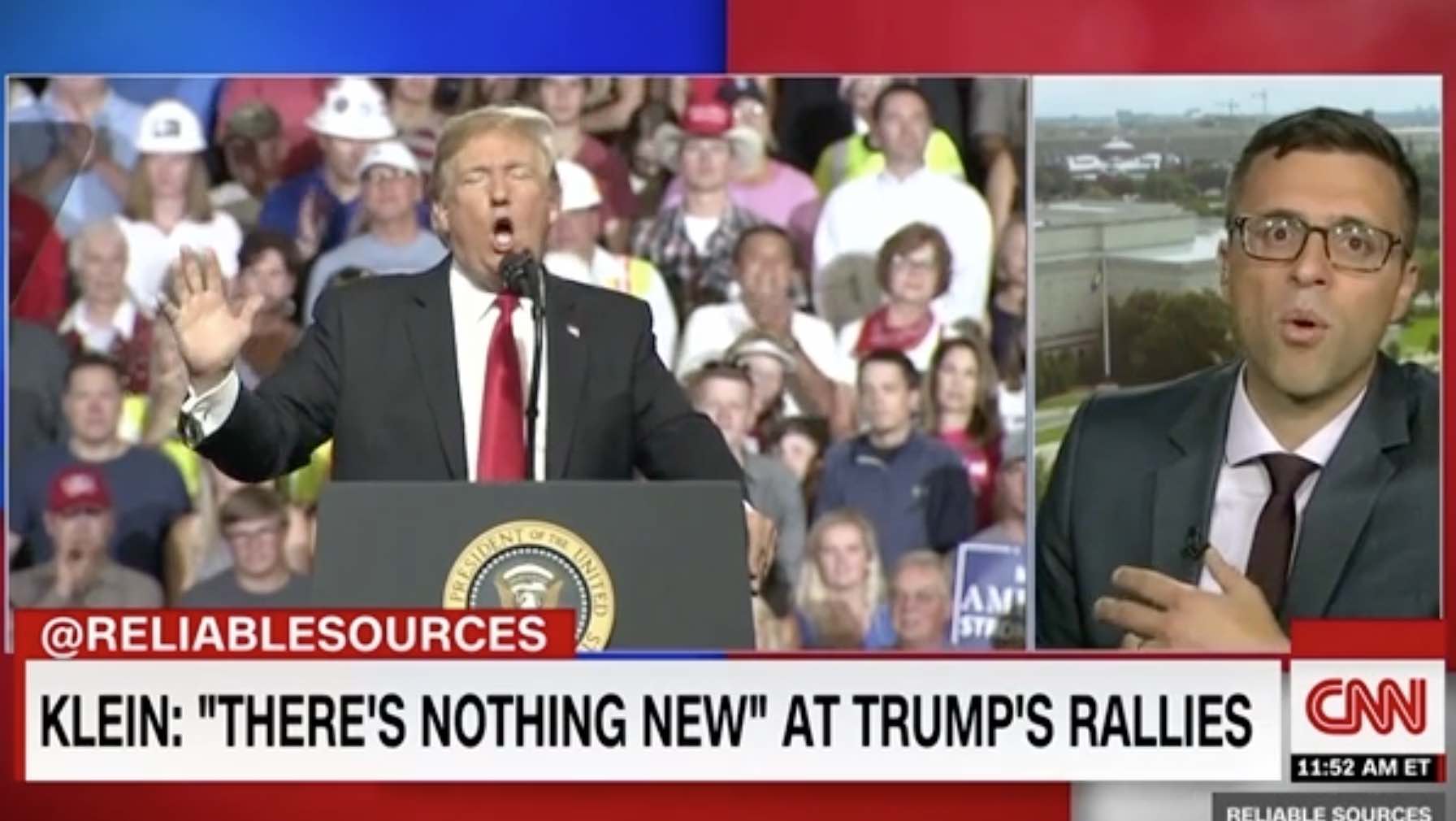 Klein wants the press and cable news — by that, he clearly means everyone but Fox — to pay less attention to Trump, even though he effectively admitted that doing so would cause hits to ratings and online traffic (Earth to Ezra: You're in charge of a business).

Fox, which is already crushing its rivals, would probably love it if the rest of the press were to follow Klein's suggestion.

Klein's use of "other important issues" is apparently code for "Trump administration scandals." The poor guy doesn't understand why Scott Pruitt's resignation at EPA hasn't been a bigger story. Well, a lot of us had a hard time understanding how the EPA's 44 scandals during the Obama administration's eight years through the tenures of Gina McCarthy and Lisa Jackson — including the disgraceful befouling of the Animas River in Colorado and New Mexico  — got no sustained establishment press attention.

The agency's ultimate handling of the Animas River/Gold King Mine disaster in mid-January 2017 as the Obama administration ended was particularly galling:

The Navajo Nation learned late Friday afternoon that the U.S. EPA is reneging on its promise to accept responsibility for the 2015 Gold King Mine spill, rejecting the Nation’s claim for damages arising out of the catastrophic event. This decision comes after the EPA represented for months that it would accept full responsibility for the spill and make all impacted people whole.

In other words, the EPA gave everyone affected the extended middle finger. Imagine the press outrage if a Republican or conservative administration had done anything remotely similar.

Reliable Sources host Brian Stelter acknowledged that he is as supposedly guilty as anyone for focusing on Trump. But so did Klein, who at the end of the segment below admitted that "our belief of what our audience is going to click on" drives what gets published and what topics get the most attention:

EZRA KLEIN: Yes, it (Trump's behavior) is all shocking and childish and immature and petulant and cruel. I mean, John McCain is dying.

BRIAN STELTER: Well, his mockery of the #MeToo Movement, that was new at the rally on Thursday night.

KLEIN: Donald Trump's existence is a mockery of the #MeToo Movement. The fact that he's given rise to a joke, I don't -- I don't really agree. Like I don't agree this is new. I'm not --

STELTER: See, I thought you were gonna —

KLEIN: Vox covers this too. I cover it, I tweet about it. I want to be super clear here. I am not outside the machine looking in and criticizing.

KLEIN: I am inside the machine looking out and wondering what the hell we're all doing. So I do want to ask the question. One, what are we crowding out when we give these -- when we let him decide what we cover every time he does a rally, right? What are we crowding out? What would have happened in another administration? How long of a story would Scott Pruitt have been?

KLEIN: How long of a story with Bill Shine have been?

STELTER: And I'm part of the problem, I think, because I wrote a story titled "Trump calls journalists bad people at a rally a week after newsroom shooting."

KLEIN: I think you can be more sympathetic to that specific story, but yes.

STELTER: So I think the argument there is that we need to point out when he's using dangerous rhetoric in the wake of a tragedy. But you know, through his sheer force of talking, right, through the volume of what he says at rallies, it's true, he generates dozens of stories that do crowd out other important issues.

KLEIN: No. I want to be super careful there because this is a thing I think we do in the media. We put the verbs on him and not on us —

KLEIN: - through his sheer force of talking. Like, Donald Trump is blackballed in Marvel Comics and every time he opens his mouth, buildings shatter. That isn't how this works. Through our decisions of what to cover, through our outrage of what he is saying, through our belief of what our audience is going to click on, we make these decisions.

Far more than just a "belief" is involved in predicting what stories, headlines, and other items will generate more clicks — especially at outfits like Vox which constantly study traffic patterns and trends.

CNN and MSNBC have already taken their first steps in covering Trump less. As Stelter indicated in the segment's introduction, "Fox News has been airing" Trump's most recent rallies live, while "usually, CNN and MSNBC have not been, but his comments at rallies typically become big news afterwards."

Stelter and Klein would thus apparently prefer not reporting what Trump says at rallies even after the fact, and even though, by standards of the first 18 months of his presidency, they have almost universally been considered newsworthy and therefore traffic-generating.

In other words, these alleged journalists want to consciously avoid reporting the news — if it's about what Donald Trump has said.