Its objective was enable Iran to retrieve $5.7 billion in previously frozen funds from Oman, while telling Congress and the American people that nothing of the kind would ever be permitted.

The panel relayed a Media Research Center finding that the Big Three broadcast networks' evening news shows completely ignored the story, and cited a recent Ben Shapiro podcast which called out the press's glaring double standard in refusing for eight years to describe any of the Obama administration's lies as, well, "lies."

In the video's opening, Abby Huntsman referred to an Associated Press story with this headline: "Inside Obama's secret plot to let Iran skirt sanctions."

That is the AP headline the New York Post decided to use, overriding the wire service's far less descriptive headline, which was, "Secret Obama-era permit let Iran convert funds to dollars."

The AP story's content also appeared to betray a reluctance to fully acknowledge the enormity of the administration's deception, while engaging in verbal gymnastics to avoid admitting that the Obama administration lied to Congress:

Those assurances notwithstanding, the Obama administration secretly issued a license to let Iran sidestep U.S. sanctions for the brief moment required to convert the funds through an American bank, an investigation by Senate Republicans released Wednesday showed. The plan failed when two U.S. banks refused to participate.

In other words, AP wants readers to believe it really was no big deal, because the administration only tried to break their supposedly ironclad promise once — that we know of. This appears to have been a signal to the rest of the press that the story didn't deserve any special attention.

The Fox morning show's co-hosts had sharp words for both the Obama administration and the rest of the press, which is clearly downplaying and in many cases ignoring this story:

ABBY HUNTSMAN: But another big bombshell this morning about the Iran deal. I’ll just read you the AP title. It says, "Inside Obama's secret plot to let Iran skirt sanctions."

So this is basically the Obama administration, so desperate to get a deal done, they are willing to mislead the American people, mislead Congress, in order to help Iran. So there was $5.7 billion held in the Omani banks. And so the Iranians said, "We want to get this money out. In order to do this we have to transfer this to euros." But first it has to become U.S. dollars.

BRIAN KILMEADE: Right, and the problem is, it’s not allowed. The problem is that Jack Lew said flat-out as Treasury Secretary we weren’t going to be able to do this, they will not have access to our banking system.

Bottom line is they (the Iranians) asked and below the radar, after a two-year investigation by the Senate Investigative Committee, the Permanent Committee, over the last two years, Senator Portman has announced that they've concluded that they went around the banking system, went around — did not tell the American people the truth. And when they went up to the banks and said, "Convert this," two U.S. Banks said, "No." 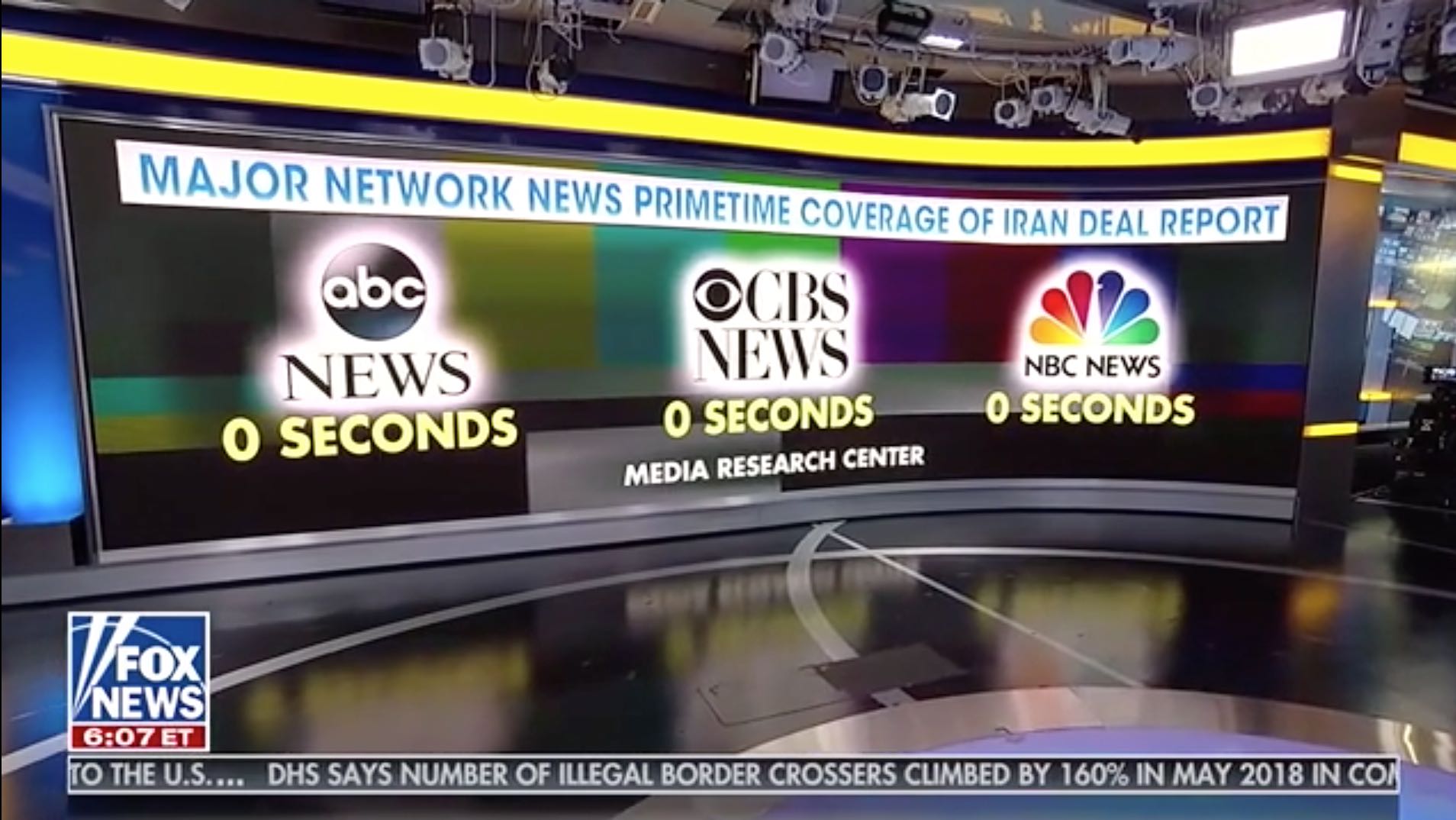 HUNTSMAN: Yeah. But how did it do last night?

DOOCY: Well, according to the Media Research Center, as you can see right there, the three major networks didn’t cover it for one second.

Why is that? Ben Shapiro had this observation.

The word "lie" was never used with President Obama with regard to anything. They said that maybe he made a mistake, or maybe he exaggerated. They would never use that kind of language with regard to President Trump, because this is how the media treat Democrats versus how they treat Republicans. Obama gets to run around saying he had a clean administration when he absolutely did not.

KILMEADE: And as Victor Davis said, basically if you look at the play-by-play of this, it looks like the Obama Administration was advising the Iranian government how to circumvent U.S. law.

KILMEADE: And basically they tried. If it wasn't for two U.S. Banks saying "We're not allowed to do this," they would have done this.

In what most people would consider the worst domestic-policy instance of Obama's serial deception, he lied at least three dozen times when he told the American people that they would be able to keep their health plan, their doctor, and their other healthcare providers when the Affordable Care Act, aka Obamacare, went into effect:

As I noted in November 2013, Obama copped out of his promise by claiming that "What we said was you can keep it if it hasn't changed since the law passed (in March 2010)" — even though, in a reference to so-called "skimpy" health plans, "responding to a question from Arizona Senator John Kyl in February 2010, (Obama) promised that you could even keep your 'Acme Insurance' plan, with no qualifications."

The number of establishment press members who used the word "lies" to describe Obama's serial lies during this entire saga was infinitesimally small.