Sunday, Australia's The Today Show host asked Fire and Fury author Michael Wolff whether he should apologize for starting and backing away from a rumor of an extramarital affair between UN Ambassador Haley and President Trump. Wolff then claimed that his earpiece wasn't working. 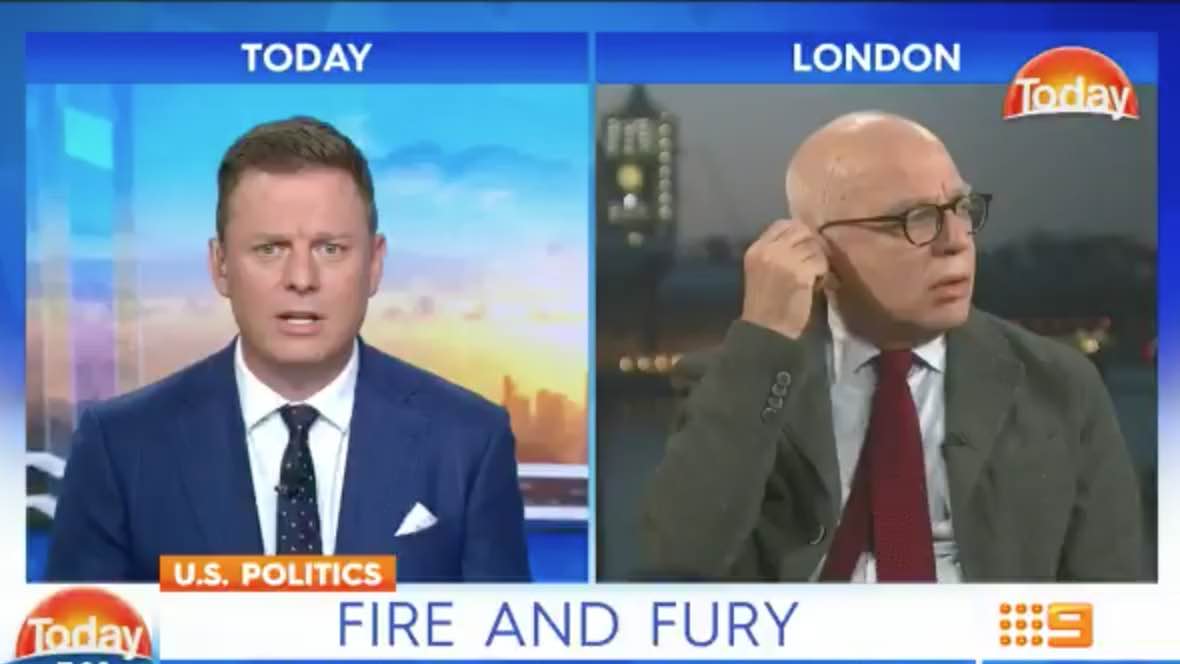 At one point, when the host asked Wolff if he could hear him, the author responded almost immediately. Today subsequently denied there were technical difficulties.

The incident follows weeks of blowback after Wolff's January 19 innuendo drop on HBO:

(On) Real Time with Bill Maher, (Wolff) told the HBO host that one revelation remains undiscovered ...

... The writer declined to specify what, exactly, that hidden nugget is, but conceded that it involves a woman, is ongoing, and that he didn’t spell it out because he didn’t “have the ultimate proof – I didn’t have the blue dress.”

... Wolff said the woman’s identity could be determined by “reading between the lines” ... toward the end of the book.

Wolff insisted he was "absolutely sure."

“It is absolutely not true,” Haley said, arguing ... his insinuation is similar to other attacks that she and other successful women have faced ... (that) they've slept their way to the top.

Wolff's piggish January 31 reaction : "She seems to have embraced it."

Wolff rejected accountability the next day. MSNBC's Morning Joe co-host Mika Brzezinski was so offended that she abruptly ended the segment and went to a break. Wolff verbally attacked Brzezinski hours later.

Given Haley's denial and Wolff's lack of evidence,Today host Ben Fordham asked him if he should apologize:

FORDHAM: You said during a TV interview just last month that you are absolutely sure that Donald Trump is currently having an affair while President behind the back of the First Lady — and I repeat, you said you were absolutely sure.

FORDHAM: Just last week, however, you back-flipped, and said, I quote, "I do not know if the President is having an affair."

Do you owe the President and the First Lady an apology, Mr. Wolff?

WOLFF: I can't hear you.

FORDHAM: You said you were absolutely sure that the President was having an affair, and now you say —

WOLFF: I'm not getting anything.

FORDHAM: You're not hearing me, Mr. Wolff?

WOLFF: (almost immediately responding) N-, I'm not getting anything.

FORDHAM: We were hearing each other well just before. You're not hearing me, Mr. Wolff?

Mr. Wolff was hearing me before but he's not hearing me any more, so the interview may be over. ...

The reaction of Bre Payton at TheFederalist.com that Wolff "pretended not to be able to hear" is understandable.

Based on the show's reaction and the one-sided audio heard at the related tweet, it should also be the default assumption (click here to see and hear Wolff-only video and audio)::