Not National News: After Years of Massive Tax Hikes, Connecticut Still Has a Budget Crisis

The national press isn't particularly interested in telling the nation how bad the state government's fiscal situation is in Connecticut.

While that apathy may be partially due to its small size and population, a much larger contributing factor may be that blue-state, high-tax, high-spending policies have pushed a formerly prosperous state perilously close to insolvency.

The problem, as has also been seen in blue-model New York, California and Illinois, is that people, especially high income-earners, have been fleeing the state in droves.

The state's downhill slide, which began during the 1980s, accelerated 27 years ago when it became the 41st state to enact an income tax. It was championed by newly-elected Governor Lowell Weicker, who had campaigned as a strong opponent. It was rammed through the State Legislature by a narrow margin in what a former Republican member described a quarter-century later as the culmination of "a season of treachery."

The far-left American Prospect predictably described the saga as "winning with tax reform."

Today, income tax collections dwarf every other Connecticut state collections source. Yet the state's fiscal problems have continued because of a virtual absence of spending restraint. According to a 2016 op-ed by Grover Norquist, the President of president of Americans for Tax Reform, "spending grew 71 percent faster than inflation between 1991 and 2014." (The state's population only grew by 9 percent during that period, and has virtually flatlined since 2010.)

Facing a budget deficit in 2011, newly-elected Democratic Governor Dannel Malloy, who attempted to nobly portray himself as the "anti-Christie" when New Jersey's Republican Governor was attempting (with limited success) to get the Garden State's fiscal situation under control, pushed through more than 75 new taxes or tax increases amounting to $2.6 billion through the Democrat-dominated state legislature.

Just two years later, after going four months without a budget, the song remained the same. In late October,  the New York Times framed as successful the fact that that the state was able to "close" a projected $3.5 billion, 2-year "deficit ... (by) cutting funding for various programs and services, implementing spending caps and increasing some taxes and fees." The Times's verbiage made the increases in "taxes and fees" seem minor, when they amounted to yet another $1 billion over two years.

In a "you can't make this up" development reported at the Connecticut Mirror on November 13, "Less than three weeks after legislators approved a new state budget, eroding revenues have opened deficits topping $175 million this fiscal year and nearing $150 million in 2018-19." 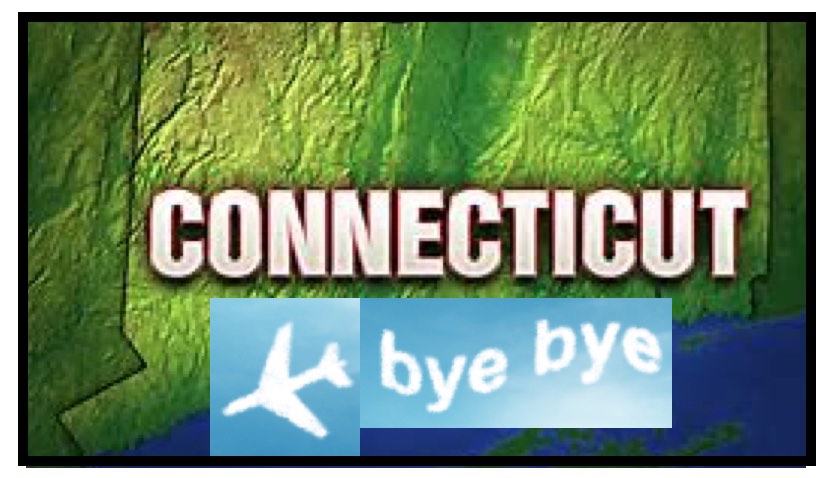 Quite belatedly, state leaders including Malloy and even the press have figured out that the status quo can't continue. Now they're alarmed about what people at those nasty free-market think tanks have been predicting and then observing for decades, namely the sustained exodus of productive people from the state.

The best "Where have you been?" example comes from a January 3 editorial at the Hartford Courant.

The paper enthusiastically supported the 1991 state income tax when it was enacted — even taking the step of "list(ing) the names of the legislators opposing it" while calling on them to abandon their campaign promises. It has been a consistent big-government champion virtually ever since. Now the Courant is finally acknowledging that well-to-do Connecticut residents have decided in vast numbers to become former residents (HT American Thinker; links are in original; bolds are theirs):

Connecticut's money is moving out — and a lot of it is moving to Florida.

It's common knowledge now that Connecticut is seeing an exodus of residents. But are the rich leaving? According to the latest IRS data, they are.

... Legislators, this is strong evidence that taxing residents at high rates is becoming counterproductive.

That means more than $2 billion in income moved from Connecticut to Florida from 2015 to 2016, more than twice as much money as moved to New York.

The overall trend of richer people leaving Connecticut has been increasing over the last five years ...

It's hardly a coincidence that the increase in move-outs "over the last five years" began to occur shortly after it became clear that Connecticut's state government had embarked on a scorched-earth mission to vacuum up every conceivable source of tax revenue it could — the consequences be damned.

The Courant editorial is a de facto admission that the blue-state tax-and-spend model has spectacularly failed in the Nutmeg State. It wraps up as follows:

The legislature's priority in 2018 must be to tackle this problem that they've hit the snooze button on for decades.

Let it never be forgotten that the legislature was able to snooze because papers like the Courant snoozed right along with them.

No wonder the left-leaning, blue-state model-supporting national press isn't interested in adequately covering this debacle or giving it the national visibility and attention it deserves.

A search at the Associated Press's raw national feed on "Connecticut budget" (not in quotes) at 3 p.m. Eastern Time on Sunday returned nothing relevant. That's interesting, because though the wire service has produced recent stories on the Nutmeg State's ongoing budget mess, it has apparently decided that only the locals should be interested. On the evening of January 2, the wire service reported (locally) that "State Comptroller Kevin Lembo says Connecticut is on track to end the fiscal year with a $224 million deficit." That's up from mid-November's $175 million.

Though it offers no solutions, a mid-July American Prospect article had plenty of lame excuses for the disastrous results of the handiwork it championed over a quarter-century ago, including this howler concerning out-migration:

Many of the state’s wealthy and most productive residents are succumbing to the renewed allure of big cities.

Sure guys. That perfectly explains all of those moves to Florida. (That's sarcasm, folks.)