Another day, another major story correction.

This time, Bloomberg News, which reported on Tuesday that Deutsche Bank records subpoenaed by Special Prosecutor Robert Mueller "zeroed in" on President Trump's business dealings, now says that the records Mueller requested instead "pertain to people affiliated with" Trump.

Here is what Bloomberg's Steven Arons erroneously reported Tuesday (bolds are mine throughout this post):

Mueller issued a subpoena to Germany’s largest lender several weeks ago, forcing the bank to submit documents on its relationship with Trump and his family, according to a person briefed on the matter, who asked not to be identified because the action has not been announced.

“Deutsche Bank always cooperates with investigating authorities in all countries,” the lender said in a statement to Bloomberg Tuesday, declining to provide additional information. 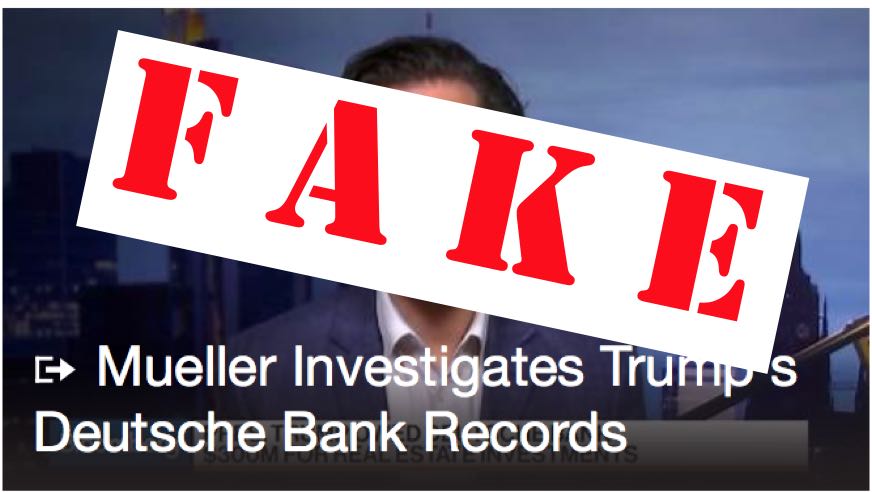 Here we go again. Arons channeled ABC's Brian Ross as he was burned (or have allowed themselves to be burned), on a single anonymous source.

“We have confirmed that the news reports that the special counsel had subpoenaed financial records relating to the president are false," said Jay Sekulow, a member of Trump’s legal team. “No subpoena has been issued or received. We have confirmed this with the bank and other sources.”

Unlike other news outlets, which in analogous circumstances have dishonestly told readers, listeners, or viewers about "clarifications," Bloomberg has at least fessed up to a genuine correction.

That said, Bloomberg's new headline doesn't acknowledge that the article which follows is a correction, and is about as non-descriptive as one can get:

Deutsche Bank Records Said to Be Subpoenaed by Mueller

Deutsche Bank AG provided records to special prosecutor Robert Mueller’s investigation after receiving a subpoena several weeks ago, according to a person briefed on the matter.

Those records pertain to people affiliated with President Donald Trump, said the person, who asked not to be identified because the action hasn’t been announced. Several news outlets -- including Bloomberg -- reported yesterday that the subpoena targeted Trump and his family’s bank records, which was disputed by Trump’s personal lawyer and the White House.

“We have confirmed that the news reports that the Special Counsel had subpoenaed financial records relating to the president are false. No subpoena has been issued or received. We have confirmed this with the bank and other sources,” Trump’s lawyer John Dowd wrote in an email Dec. 5.

AFP reported late Dec. 5 that the subpoena was issued in connection with Paul Manafort, Trump’s former campaign chairman who was indicted in October. Manafort spokesman Jason Maloni declined to comment.

“Deutsche Bank always cooperates with investigating authorities in all countries,” the lender said in a statement to Bloomberg on Tuesday, declining to provide additional information. A spokesman for Mueller’s office declined to comment.

So once again, a single-sourced anonymous story has ended up being bogus, stayed alive long enough for fever-swamp anti-Trumpers to celebrate while spreading it far and wide, and has then had to be corrected — with the correction, as usual, getting far less attention than the original.

This really has become almost a daily event, as CNBC's Jake Novak noted in a Monday afternoon column about the establishment press's vanishing credibility:

President Donald Trump's attacks on the news media continue to spook journalists, First Amendment defenders and government ethics experts. His comments are scaring the media and generally are unprecedented in U.S. history.

There's only one problem: Trump's got a point.

We all saw that in the starkest terms on Friday, as ABC News broke into its regular programming with a special report saying then-presidential candidate Donald Trump had directed Gen. Mike Flynn to make contact with the Russians in 2016. It turned out that report was woefully incorrect. The network had to clarify and then correct the story before suspending the reporter responsible, Brian Ross, for four weeks without pay.

... There are supposed to be more safeguards against something like this happening.

It doesn't take a Trump apologist to feel ABC or other networks and newspapers are so willing to bash Trump that these kinds of mistakes have been inevitable. And if the industry tries to palm all on Ross himself, it will surely be repeated by others.

And it has been repeated, this time by Bloomberg.

In between, over this past weekend, the same scenario played out at the New York Times with its brazen mischaracterizations relating to presidential transition team member and current White House deputy national security adviser K.T. McFarland. A review of the radical changes the Times was compelled to make to its originally published article seen at NewsDiffs.org confirms this.

The corrected Bloomberg report may be such an example. The video still present at the corrected story at 9:45 Wednesday evening is clearly from Tuesday, and does not reflect the news service's correction. The primary "expert" interviewed actually claims in the video that Trump's personal lawyer, though he denied the existence of any subpoena for Trump's records, "doesn't say (on) what basis he's making this statement." The related text of the email Trump lawyer John Dowd published yesterday, and which appeared in Bloomberg's corrected story, specifies the "basis" quite plainly, sir.

Why would anyone who cares about the integrity of their reporting leave that dated, incorrect video up?

... Any objective person is left with an image of a media outlet squarely focused on attacking the president and then wildly celebrating the chance he has been weakened.

... This dangerous pattern will be repeated until top news organizations re-examine their operations and institute a better set of best practices.

If they don't, Trump won't have to destroy the American news media. It will simply destroy itself.

And if they don't, they'll deserve it.