A BuzzFeed columnist has declared that "Cars don’t belong on the streets of big cities, and we should do everything in our power to get rid of them." She can't be serious? The headline is "We Should Ban Cars from Big Cities. Seriously."

We've seen this idea proposed by environmentalists from time to time based on "climate change," and by urban planners in the name of creating a few blocks of open space, but Jessie Singer's advocacy of a total ban is largely in response to Tuesday's terrorist attack in New York City.

Singer's column clearly has management's approval, given that the site's Editor-in-Chief Ben Smith, promoted it in a tweet shortly after it appeared Friday morning.

There is clearly a problem with pedestrian deaths on the West Side Highway bike path involved, and Singer has tragically been affected by it (bolds are mine throughout this post):

Exactly 10 years and 11 months ago, a different man steered onto the same Manhattan bike path that Sayfullo Saipov did this week. He also accelerated for a mile, and then he killed my best friend. My friend’s name was Eric Ng, and he died on the same block as Saipov’s first victim. The drunk driver struck Eric so hard that he was knocked out of his sneakers.

... After Eric was killed, the city of New York put up a few plastic bollards along the bike path, as though this was not a car problem, but a bollard problem. On Tuesday, Saipov drove right over those plastic bollards.

... the same bike path where an ISIS sympathizer killed eight people on Tuesday, Olga Cook was also killed by a driver in 2016. Carl Henry Nacht was killed there in 2006. Later that year, so was my best friend.

Of course, we all extend our sympathies to Jessie Singer for the loss of her friend. She has a valid complaint about the use of ineffective plastic bollards. Many bike paths in the U.S. are protected from vehicular intrusions by concrete posts or barriers at intersections with roads. It's difficult to see, in light of the deaths Singer cited, why New York City hasn't employed them in this instance.

But Singer also justified a car ban based on Tuesday's terror attack: 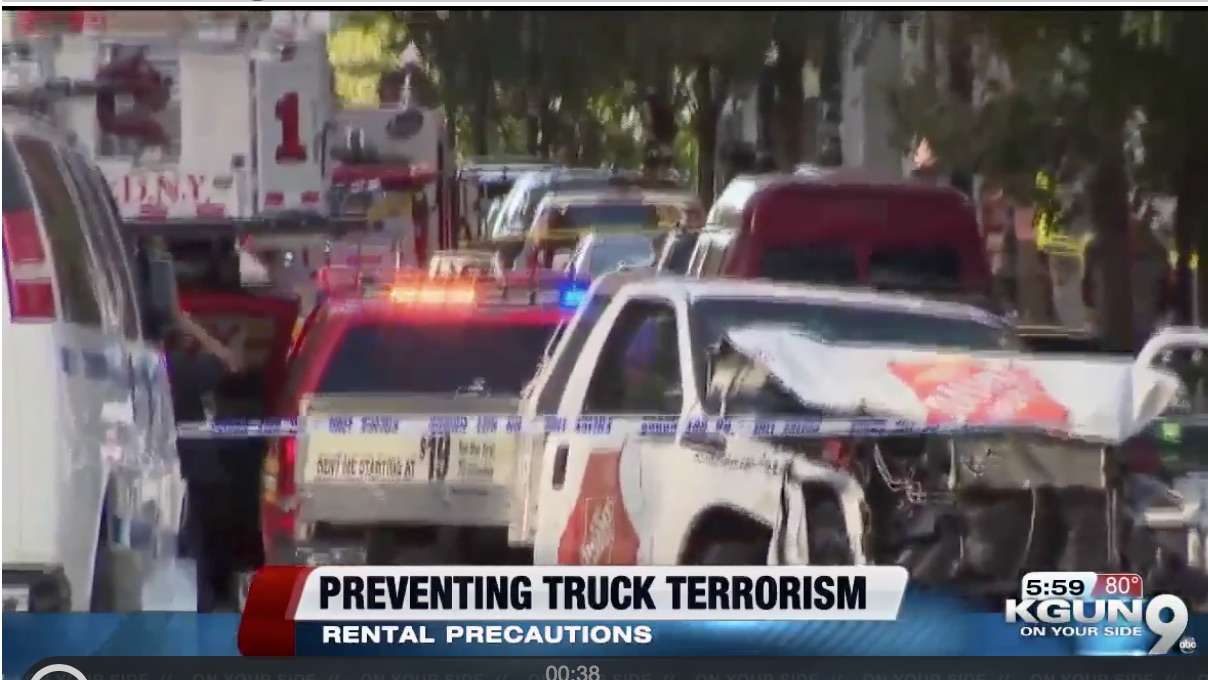 In the coming days, politicians will try to convince you that what happened on the West Side Highway in Manhattan this week was an issue of terrorism, immigration, or religion. But just like the plague of mass shootings is a gun problem, the thousands of people killed by cars as they walk our streets every year is a car problem.

A gun lobbyist would typically step in right about now to ask whether those who demand gun control after mass shootings also want to ban cars after events like this week. To which I say: Hell yes. Cars don’t belong on the streets of big cities, and we should do everything in our power to get rid of them.

Guns and cars are not the problem, as they are inanimate objects which don't kill anyone on their own. People using guns to kill is the problem. Singer's friend died not because of the existence of a car, but because someone drove a car while drunk.

Singer's attempt to look at the big picture should have caused Smith to send her column back for better data. She assumed that the nearly 6,000 pedestrian deaths in the U.S. in 2016 all occurred in urban areas. 2015 data, apparently the latest available with a rural-urban breakdown (which I could not link without forcing users to download a file), shows that 22 percent of pedestrian fatalities occurred in rural areas.

The New York Times reported in January that pedestrian deaths in all of New York City "increased last year (2016) to 144, from 139 in 2015." The 2016 total is roughly proportional on a per-capita basis to the 5,997 such deaths in the entire U.S. Gotham's figure is in a sense remarkably low, given how much more the average resident there has to walk.

That said, 2016's nationwide death toll was an 11 percent increase from 2015. "Distraction" on the part of drivers and pedestrians is getting a lot of the blame for the increase. It should also be noted that pedestrians have sometimes contributed to their own deaths:

... researchers say they think the biggest factor (for the increase) may be more drivers and walkers distracted by cellphones and other electronic devices, although that’s hard to confirm.

... Another factor in pedestrian deaths is alcohol. Thirty-four percent of pedestrians and 15 percent of drivers involved in fatal crashes were intoxicated at the time ...  But there is no indication that there has been a change in drinking habits that would account for the spike in deaths ...

A March 30 NPR item notes that "Drivers distracted by their devices are a well-documented, rising cause of traffic crashes, but there are a growing number of pedestrians, too, who can become oblivious to traffic around them."

As to the terrorism angle, Singer writes:

Vehicular terrorism is still a minuscule part of the overall picture of pedestrians being killed by cars. But it is a rising tide, with automobiles used as weapons this year alone in Charlottesville, Barcelona, London, and Stockholm. But before terrorism experts start calling for a radical redesign of our security culture and the NYPD permanently surrounds Trump Tower with dump trucks, let’s make this easy: Ban cars in New York City. Boom, you saved all those lives.

The inclusion of Singer's obviously irrelevant dig at Trump Tower is another editorial failure. Given her criticisms of bike path protections, why didn't she cite Gracie Mansion, where New York City Mayor Bill De Blasio lives?

Getting back on topic, one can hardly imagine ISIS's glee if New York City actually tried to implement a car ban or even to severely restrict vehicular traffic in reaction to a terror attack.

A final irony is that a passenger vehicle ban would almost certainly not extend to delivery trucks, unless Jessie Singer believes that food, clothing, and other supplies could somehow deliver themselves.