Two large corporations have withdrawn as sponsors of "Free Shakespeare in the Park" in New York City because of the theater group's presentation of a modernized version of Julius Caesar where a man who is clearly a stand-in for Donald Trump gets assassinated.

Given the play's offensive content, a very pertinent question to ask would be: "When will Time Warner, the parent company of CNN, which at least pretends to be an objective news organization, pull its sponsorship?"

Aldan McLaughlin at Mediaite described the play on Tuesday (links are in originals, and bolds are mine throughout this post):

... this rendition of Shakespeare’s tragedy comes with a twist — Caesar is played by a character that bears a striking resemblance to President Donald Trump.

According to Playbill, The Public Theater’s Oskar Eustis directed the Trump-inspired take on the classic political drama, which boasts famed stage actor John Douglas Thompson and House of Cards star Corey Stoll in its cast.

The choice of Julius Caesar for the annual program is one dripping with subtext, chosen deliberately for the supposed parallels between the Roman dictator and Trump. A description of the play on The Public Theater’s website states that “Shakespeare’s political masterpiece has never felt more contemporary.”

... Laura Sheaffer, a sales manager at Salem Media who attended a performance of Julius Caesar on Saturday, first described the the Trump-inspired performance during an interview with Joe Piscopo on AM 970 THE ANSWER ... 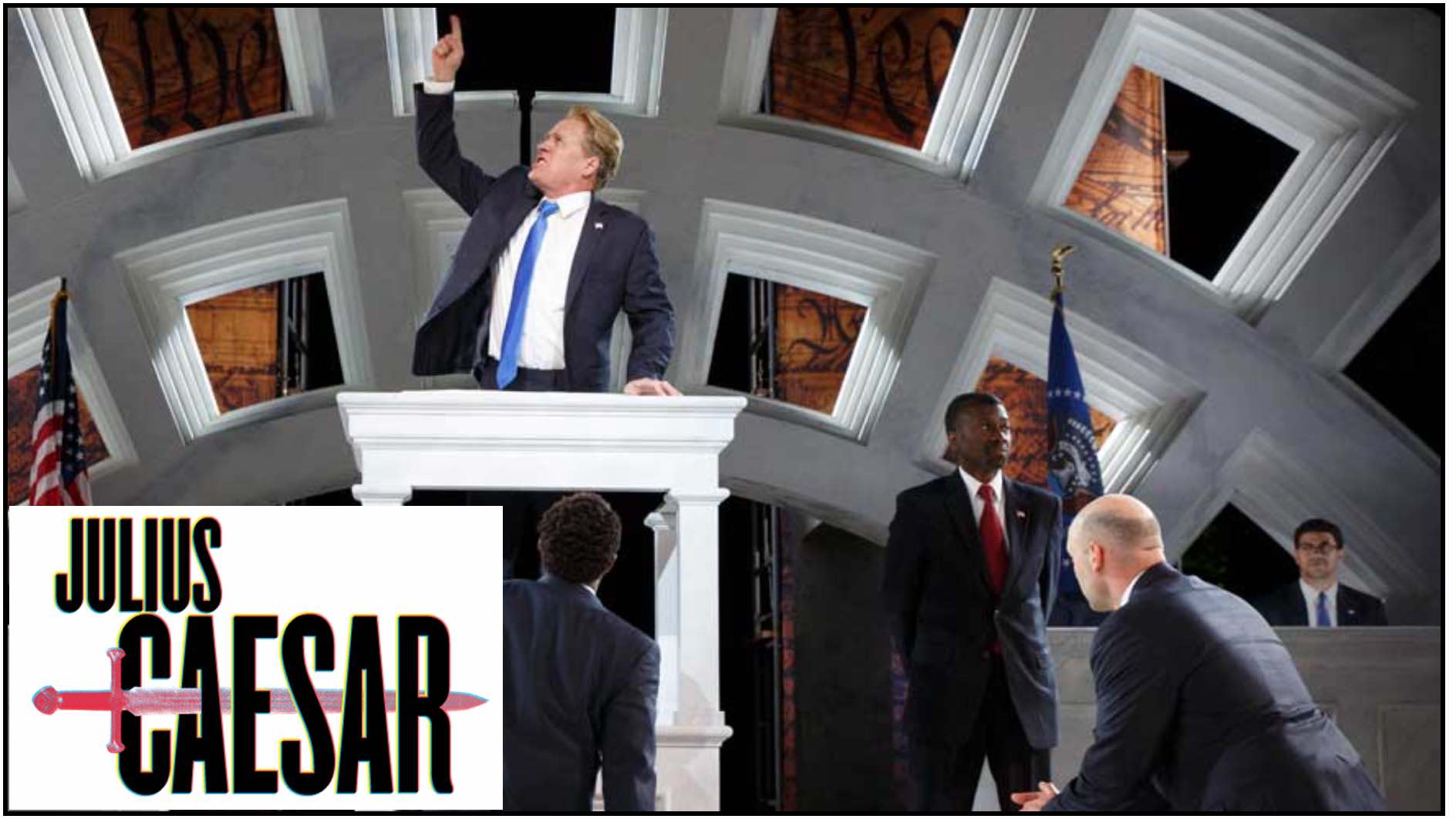 (Sheaffer said that)  the script was mostly loyal to the original Shakespeare, and that there was no explicit reference to the American president, though the intention was “blatantly obvious.”

In the scene before Caesar is assassinated, his wife Calpurnia begs him to stay away from the Senate, claiming she is having nightmares of his murder. According to Sheaffer, the actress playing Calpurnia bore a resemblance to first lady Melania Trump — replete with a “Slavic accent.”

... the Trumpian Caesar is attacked by the Senators and stabbed to death as an American flag hovers overhead, according to Sheaffer. “They had the full murder scene onstage, and blood was spewing everywhere out of his body.”

“To be honest I thought it was shocking and distasteful,” Sheaffer continued. “If this had happened to any other president — even as recently as Barack Obama or George W. Bush — it would not have flown. People would have been horrified."

On Wednesday, John Nolte at the Daily Wire described the organization involved in producing and presenting the play, and identified many of the effort's major sponsors:

... The organization (presenting the play) is called The Public Theater; a non-profit established some 60 years ago most famous for its Shakespeare In the Park productions, these are shows free to the public and dedicated to keeping the works of William Shakespeare alive. A worthy goal, no doubt. But this year, every evening between May 23 and June 18, Shakespeare In the Park is stabbing President Trump to death — assassinating the American president in a production of Julius Caesar.

... Among others, guess who proudly sponsors this nightly wish-fulfillment in the bloody, live and in person assassination of the President of the United States of America?

No, for real ... (Sponsors' graphic saved here for when the page ultimately changes — Ed.)

... Other proud sponsors of President Trump's nightly assassination include American Express, Bank of America, Delta Airlines, and you have to assume we, the suckers, the taxpayers.

... For every night, thanks in large part to CNN's owners, from a public stage in a major public park, the news that it is both a righteous and patriotic act to assassinate President Trump is blared loudly and clearly.

The New York Daily News, certainly no friend of Trump's, reported Sunday evening that Delta and Bank of America have dropped their sponsorships.

That news didn't stop the paper from appearing to be complimentary towards the play's modernized plot line:

Delta, Bank of America drop sponsorship of Shakespeare in the Park over ‘Julius Caesar’ stunt that shows Trump assassination

Delta Airlines and Bank of America pulled out of their sponsorship of New York’s Public Theater on Sunday over a production of “Julius Caesar” that reimagines the main character as President Trump.

Shortly after Delta, who was a four-year sponsor, made its announcement, Bank of America yanked its support as well.

... (Actor Gregg) Henry, who already played a Trump stand-in on “Scandal” last year, models his Caesar almost perfectly after the man in the Oval Office. He meets his end after being stabbed to death by women and minorities on stage.

Gosh, it's almost as if having Trump assassinated by "women and minorities" makes it all okay.

... (A Delta spokesperson said) "Their artistic and creative direction crossed the line on the standards of good taste. We have notified them of our decision to end our sponsorship as the official airline of The Public Theater effective immediately."

... (A Bank of American spokesperson said) "The Public Theater chose to present Julius Caesar in a way that was intended to provoke and offend. Had this intention been made known to us, we would have decided not to sponsor it."

Delta and BofA were clearly motivated by concern over alienating their customers nationwide.

Time Warner, as CNN's ultimate parent (the network is still part of Turner Broadcasting which is, in turn, a division of Time Warner), should be at least as worried about blowback.

CNN, at least in theory, is supposed to cover the person who is obviously the target of this play's assassination with something resembling objectivity. That obviously isn't so these days, to the point where, as the Media Research Center's Brent Bozell and Tim Graham noted Saturday morning, the network's Fareed Zakaria gave the Public Theater's assassination chic Julius Caesar "a rave review on Twitter," calling it "a masterpiece."

Even ignoring Zakaria's tweet, it's impossible for CNN to claim any kind of news legitimacy as long as its parent company financially supports what Nolte properly described in unexcerpted text as "a not-very-subtle campaign to have candidate/President Trump assassinated." And that's even before getting to the long list of other Time Warner entities, many of which are also involved in presenting news and entertainment.

Absent the play's immediate termination, Time Warner's continued involvement with The Public Theater cannot possibly be defended, nor can continued patronage by anyone in civil society of the company's products and services.

Finally, though I'm told by a friend that it was a topic of discussion on Fox News last week, this play and its sick, modernized plot have otherwise flown almost entirely under the national media radar. There is absolutely no chance that this would have happened if it had been adapted to show the assassination of Barack Obama while he was in office.