Last week was a very bad week for the establishment press, and for the leftist politicians who can't resist repeating and relaying the media's questionable "news" its journalists have been reporting as if they are clearly established facts. But you wouldn't know it from the Associated Press, which, consistent with its practice during many previous weeks, directed all eleven of its "fact-checking" efforts to statements made by President Donald Trump or members of his administration.

An editor's note at the hosted.ap.org posting of the May 15 story claims that the wire service's fact-checking enterprise takes "A look at the veracity of claims by political figures."

Hardly. Other than one story identifying a number of completely false clickbait stories published by obscure websites and promoted in email chains on May 6 ("NOT REAL NEWS: A look at what didn’t happen this week"), the AP's current "Fact Check" page, without exception, looks only at claims made by Trump, his administration, Republicans, or conservatives. From all appearances, fact-checking of liberals and leftists is off-limits.

This post will focus only on the two most obviously bogus AP May 15 "fact checks," and will then identify five serious journalistic and political busts of the past week which the AP chose to ignore. 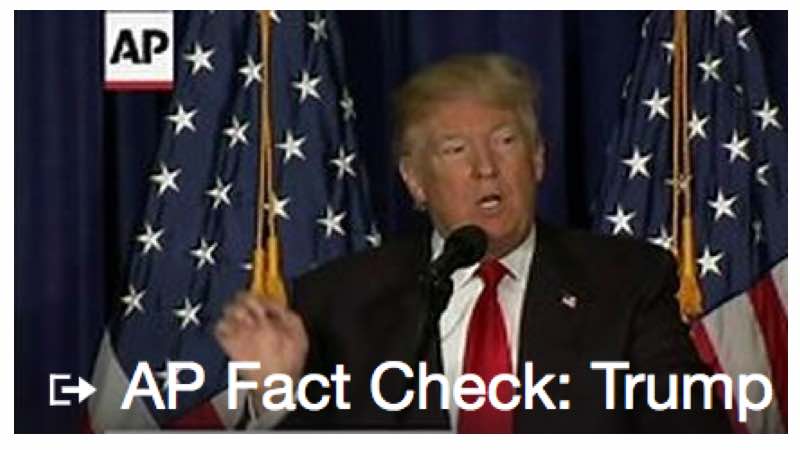 TRUMP: "First of all, when you’re under investigation you’re giving all sorts of documents and everything. I knew I wasn’t under and I heard it was stated at the committee, at some committee level, that I wasn’t." — NBC interview

THE FACTS: An absence of document requests can’t be read as an indication that he isn’t under investigation, as Trump suggests. Investigations begin with interviews and document searches that are steps removed from the subject of the probe. Direct contact with the subject wouldn’t become known to that person until late in the process.

Trump didn't even say that the absence of document requests shows that he's not under investigation. He said that such requests are something a person would normally expect if one was under investigation (which may or may not be true, depending on the nature of what's being investigated).

More fundamentally, the AP reporters knew what Trump was specifically referring to, and didn't have the integrity to identify the senators on the Judiciary Committee who have all but confirmed that Trump is not under investigation.

(Democratic) Senator (Dianne) Feinstein and I heard nothing that contradicted the president's statement.

TRUMP: “The Electoral College is almost impossible for a Republican to win. Very hard.” — NBC interview

THE FACTS: History disagrees. Over the past century, the party victory split is dead even: 13 for Democrats, 13 for Republicans. If you add the total electoral votes amassed by the candidates of each party over that time, Republicans actually come out ahead — 7,159 to 6,607.

Good Lord. For starters, Trump was expressing an opinion, concerning which the facts are strongly on his side, while the AP reporters pretended not to recognize the difference between Trump's contention concerning where things stand now and where they've stood "over the past century."

One have to be hopelessly agenda-driven, a complete ignoramus, or both (my money is on "both") to believe that presidential election results from the past 100 years have any bearing on the truth of Trump's statement (which again, was an opinion).

Do I really need to note that the country has three times as many people, that their geographic dispersion has radically changed, and that 100 years of technological and other progress has radically affected the issues each party champions? For the benefit of AP reporters Calvin Woodward and Jim Drinkard, I clearly do.

Before 1960, the "Solid South" voted for Democrats in lockstep, while the Democratic Party and its candidates willingly tolerated its southern members' opposition to segregation and support of Jim Crow laws. What relevance does that have to the current era, when much of the South, now that those battles are over, is now dominated by Republicans?

Far more relevant than looking at the past — especially since Trump was speaking in the present tense — is looking at the widely acknowledged head start Hillary Clinton had going into 2016:

The overwhelming consensus in early 2016 was that Hillary Clinton, or any Democrat, was a prohibitively solid favorite to win the 18 states listed above plus DC and their 242 electoral votes, representing almost 90 percent of the 270 electoral needed to achieve a general election victory. Meanwhile, the Republican nominee could only count on the solid support of the 23 states listed above and their 191 electoral votes, barely 70 percent of the needed Electoral College majority.

To win the presidency with a majority of the election's 538 Electoral College votes, all Mrs. Clinton had to do is hold the "solid 19" and win Florida. The Republican challenger could take every other toss-up state — and still lose.

Of course, we all know that Trump turned all of that on its head with shocking wins in Pennsylvania, Michigan and Wisconsin, along with enough other wins in key toss-up states, including Florida.

Meanwhile, Circa.com has identified at least five things the establishment press got wrong last week — and that's with limiting the scope of report on "Trump, Comey and Russia":

As John Solomon at Circa wrote in introducing his analysis: "You can review the facts and decide for yourself whether the media shamed itself."

It's pretty obvious they did. It's also quite obvious that the so-called "fact checkers" at the Associated Press have no interest in exposing media failures or the Democratic Party and leftist politicians who adopt them as talking points.