The Washington Post, which recently changed its web masthead's motto to "Democracy Dies in Darkness," also promises potential subscribers "Award-winning content" and "Top political coverage." We've yet to hear from the Post where it would categorize its original description Sunday of destruction perpetrated by far-left environmentalist vandals — as "a daring act of defiance" — at Trump National Golf Club in California.

As of 3 p.m. on Wednesday, MSN.com's carriage of the Post story still contained the original opening sentence from reporter Peter Holley which describes the vandalism in noble terms, i.e., "A group of environmental activists pulled off a daring act of defiance at one of President Trump’s premier golf courses early Sunday morning":

The original report did not characterize the actions as "vandalism" until its fourth paragraph.

The Post has revised the article's opening at its own website without owning up to what it originally presented:

The enviro-vandals' video remains. They and their destructive sympathizers are surely thrilled to see their handiwork given such prominent national visibility.

John Sexton at Hot Air is among those who are not amused. But he's too kind to the perpetrators' philosophical allies, and to the Post itself (bolds are mine):

Does anyone think a major newspaper would have responded this way if someone had carved a message into the lawn outside President Obama’s former Chicago home? 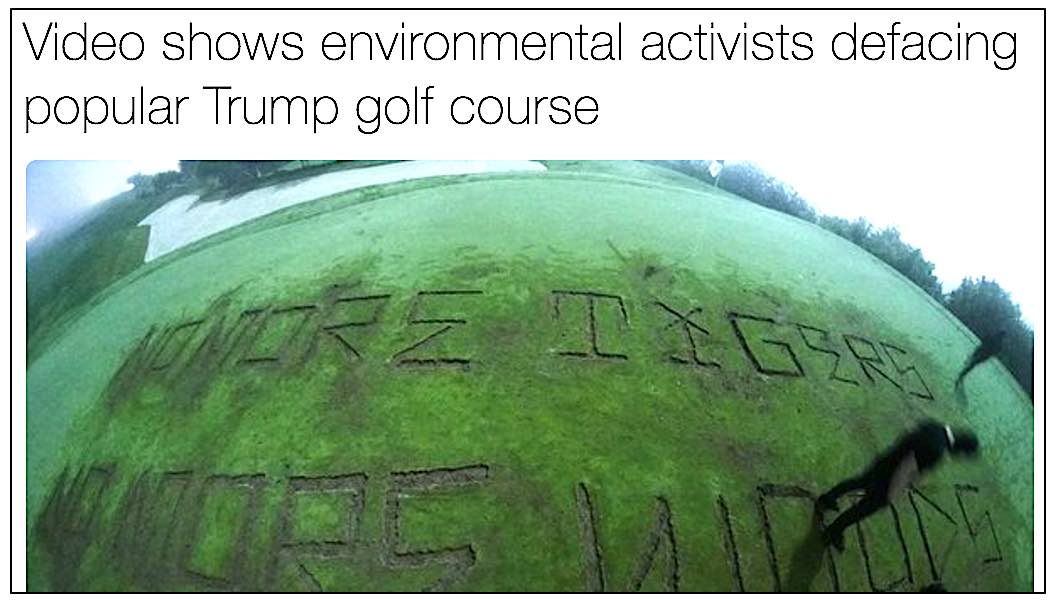 One member of the group responsible, which calls itself an “anonymous environmental activist collective,” told the Post, “Tearing up the golf course felt justified in many ways.” He continued, “Repurposing what was once a beautiful stretch of land into a playground for the privileged is an environmental crime in its own right.” So the existence of the gold course is a crime, one that justifies vandalism. And the Washington Post went with this, at least initially.

This episode demonstrates two things. One, there are extremists on the left who routinely justify vandalism in pursuit of their political goals. I’m not just talking about the past few months either. Going back to 2011, when Occupy was a going concern, there was a rash of vandalism against banks and ATMs. It’s not that everyone on the left condones this behavior but it does continue in one form or another year after year.

The second thing this shows is that there is a kneejerk impulse by many in the media to view even the more extreme elements of “the resistance” as heroic crusaders rather than what they really are: kids trashing other people’s property. This shouldn’t have been a tough call for the professional journalists at the Washington Post. That fact that it took them two tries to get it right really is revealing.

It may be that "not ... everyone on the left condones this behavior," but one virtually never hears any actual condemnations of actions like these from supposedly responsible leftists. All too often we get tired excuses. Additionally, unlike the treatment afforded even the tiniest examples of misbehavior on the right, establishment press reporters aren't in the faces of Democratic Party and other liberal leaders demanding that they denounce these actions.

What the episode really shows, as evidenced by the failure to acknowledge what was originally written and the lack of a genuine apology for the original treatment, is that the Washington Post, at the very least, does not currently have journalists who are conducting themselves as professionals (at worst, they're incapable of professional conduct).

In a sane world, reporter Peter Holley and anyone else who reviewed the post before it went live would be severely and publicly disciplined. Instead, he has posted a March 15 item, so apparently what he did is considered no big deal.

The Post wouldn't have even considered a second try "to get it right" (almost) but for the outrage which ensued, including this tweet from Eric Trump: "The @WashingtonPost should be ashamed of themselves. This is a criminal act. Disgusting what some media has become."

How far will Trump assassination chic and anti-Trump property vandalism and obstruction have to go before the left's leaders disown, discredit, and, where applicable, defund those involved?

As to the Post, what's dying are the remnants of its credibility and responsibility.

(Note: The brightness and sharpness of the picture grabbed from the enviro-vandals' video were changed to make their "message" more visible.)