On December 5, the New York Times published an op-ed column by Republican Texas Elector Christopher Suprun entitled "Why I Will Not Cast My Electoral Vote for Donald Trump." The Times celebrated Suprun's "courageous stand" in a December 6 editorial.

In that op-ed, Suprun claimed that "Fifteen years ago, as a firefighter, I was part of the response to the Sept. 11 attacks against our nation." The paper's description of Suprun says he "works as a paramedic." Neither the Times, which has published nine other items containing Suprun's name since his op-ed, or the Associated Press, which has published three, have noted that those two statements have been exposed as at best highly questionable, and at worst opportunistically fraudulent.

Beyond that, there is also substantial evidence that Suprun may have motivations other than ideological purity for publicly proclaiming his intent to be a faithless elector on December 19.

One Dallas TV station dug into Suprun's employment past, including his possible whereabouts on September 11, 2001 what they found:

Transcript (WFAA story, with update, is here; bolds are mine throughout this post):

MALE ANCHOR: Well, they claimed he was first responder on 9/11, a firefighter who went to the Pentagon.

FEMALE ANCHOR: But tonight, stories repeated for years are getting more scrutiny, as Christopher Suprun prepares to cast his ballot as a member for the Electoral College. The local Reporter Jason Whitely has this story you'll only see on News 8.

JASON WHITELY: He portrays himself as a hero.

ANNOUNCER: He's a firefighter-paramedic who was first among the scene when the third plane struck the Pentagon during the terrorist attacks September 11, 2001.

WHITELY: A Dallas resident for more than a decade —

ANNOUNCER: He is a founding member of the Never Forget Foundation.

WHITELY: Chris Suprun is a licensed paramedic, and has a non-profit called the Never Forget Foundation.

Making news now, though, for what he wrote in the New York Times this month — how he as a member of the Electoral College will not support Donald Trump.

Suprun even uses his résumé to establish his credibility writing that, "Fifteen years ago, as a firefighter, I was part of the response to the Sept. 11 attacks against our nation."

FIRST RESPONDER GRANTED ANONYMITY: He claimed to be a first responder with Manassas Park [Virginia] Fire Department on September 11, 2001, and personally told us stories, "Well, I was fighting fire that day at the Pentagon," (then) "No, I was on a medic unit at the Pentagon."

WHITELY: He told you all that?

FIRST RESPONDER: Yes, and you make a phone call to Manassas Park, and find out he wasn't even employed there until October of 2001.

WHITELY: That's what Manassas Park told us as well. (It) said it hired him on October 10th of 2001 — a month after 9/11. And the chief even says his department never responded to the Pentagon. [It's 30 miles away.]

One first responder who knows Suprun agreed to speak to us only if his identify could remain confidential.

FIRST RESPONDER: It's no different than stolen valor for the military. Dressing up and saying, "Hey, I earned a Purple Heart," when you were never even in combat. There's big difference between shopping at Old Navy and being a Navy SEAL.

WHITELY: Suprun's résumé shows he's currently a paramedic with Air Methods Air Ambulance Service. But that company told us he doesn't work for them.

Suprun also claims to be an active paramedic with Freedom EMS in Dallas. State records though show there's no such company. One used to exist in Houston, but went out of business in 2008.

Turns out federal court records show Suprun has spent the last five years in bankruptcy, just getting out this month, and even collected unemployment during part of it, while his résumé says he was working.

Suprun never responded to multiple emails from us. We got a voicemail when we tried to call ("Sorry, mailbox is full"), and two public relations companies he hired emailed us that Suprun's schedule is "jammed packed."

Chris Suprun's story raises a much bigger question: How in the world are presidential electors chosen and aren't they vetted? Unfortunately not. In fact, they are elected in a pretty informal process at each party's state convention.

WILSON: I think in the future there will be a little more vetting and scrutiny given to prospective electors, only because there has been so much discussion in this cycle of the possibility of faithless electors.

WHITELY: So if Suprun isn't working at the places on his résumé, whose uniform is he wearing at public appearances? Manassas park officials say it looks like theirs from 12 years ago.

Texas electors meet Monday in Austin, and it's uncertain who will get Suprun's vote. But as Suprun questions Trump's credibility, fellow first responders have doubts of their own about his. Jason Whitely, Channel 8 News.

FEMALE ANCHOR: So far Chris Suprun is the only Republican elector who has said publicly he will not vote for Donald Trump. Texas has 38 electors who will meet in Austin on Monday, and News 8 will be there.

The station has posted an update:

UPDATE: Responding on Reddit today, Chris Suprun said he worked as a firefighter in Dale City, Virginia on September 11, 2001. But there's no listing for Dale City on his publicly available and comprehensive LinkedIn résumé. In September 2001, according to Suprun's LinkedIn résumé, he was employed by the Manassas Park, Virginia fire department. Suprun also does not list being a firefighter in Dale City, Virginia on a recent lengthy seven-page paper résumé, which WFAA obtained. Neither Suprun nor his public relations firms have responded to WFAA since this story was first published.

The Dale City Police Department has released a statement which seems to help Suprun, but also hurts him:

On the plus side, Dale City has verified Suprun's membership in the department on 9/11.

On the minus side:

When the press wants to, it digs deeply into the past of targets its members wish to smear. Remember how it was somehow important to "dig up dirt" on a low-level congressional staffer, even from "from her high school and college years," because this staffer, Elizabeth Lauten, had the gall to merely criticize the dress and demeanor of Barack Obama's daughters on her personal Facebook page — even though the daughters' behavior also "drew wry headlines from publications such as USA Today and Gawker"? They hounded her out of her job. 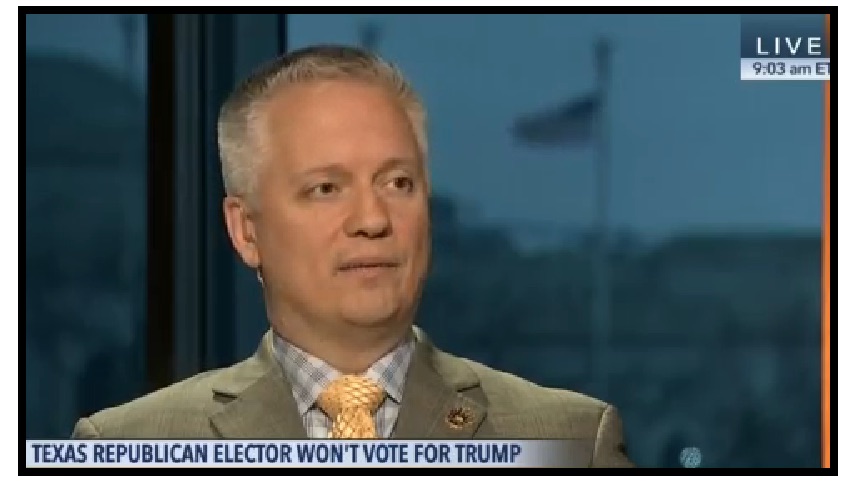 But in the time-honored tradition of refusing to do any follow-up work with leftist heroes of the moment, the New York Times put no visible effort into scrutinizing Chris Suprun before it published his op-ed promising that he would be a faithless elector.

Since that op-ed's appearance, neither the Times nor the Associated Press have visibly dug into Suprun's background. A local TV station did the work the national press should have started doing ten days ago.

The Times still claims that Suprun "works as a paramedic" at the end of his op-ed. Based on what WFAA has reported, the paper either needs to prove that statement true or withdraw it, while noting that the op-ed's author lied to them about his current employment and, based on what WFAA presented, has lied on his LinkedIn résumé.

Other investigative work into Suprun's past has been done by outlets the establishment press likes to characterize as generators of "fake news." Readers can go to the most important and most heavily documented of those stories here, and then judge who the fakers really are. As that story states, it is not unreasonable to ask "whether or not Suprun is receiving money, favors, or other kinds of benefits in exchange for his anti-Trump cooperation."