Thursday, Dan Sewell at the Associated Press worked hard to create something out of almost nothing in Southwestern Ohio, where I happen to live.

Sewell's work oddly appeared only as a very short squib with no follow-up at the wire service's main national site, while the AP published his full story at its "Big Story" site. The theme: "Hillary Clinton campaign's hopes are rising" in the Buckeye State because of "Donald Trump's provocative rhetoric and his treatment of women," leading to "indications that ... (she) is pulling more support than usual this year among suburban Republicans."

My experience, though anecdotal like the AP's, is that far more people in Southwestern Ohio who voted for Barack Obama in 2008 and 2012 have unequivocally stated their preference for Trump — a subject Sewell appeared to deliberately avoid.

One would think, if you're going to include just one person in your informative squib, that he would be some kind of a Republican Party official or longtime foot soldier in the trenches. But he's not. More critically, Sewell's longer "Big Story" dispatch completely fails to support the idea that there are "many indications" of significant Republican support moving to Hillary:

Some waver from Trump in deep-red Ohio suburbs 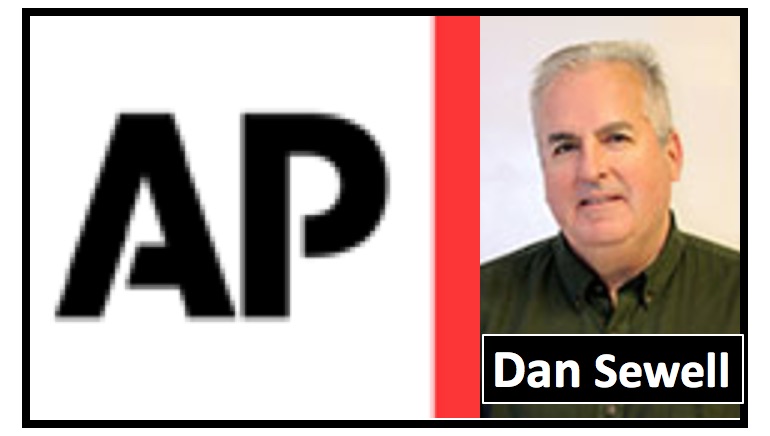 James Stepp says he is an Ohio Republican who is supporting Democrat Hillary Clinton. His reason? A Trump presidency, he says, would damage the GOP for years to come.

"The party needs to jettison Donald Trump in order to survive," said Stepp, 29, of Franklin, in Warren County.

Voting for a Democrat in order to save the Republican Party is not a common thread of presidential campaigns, by any means. But this is no ordinary election, and many Republicans are finding reasons to back away from a nominee whose provocative rhetoric and treatment of women appall them.

Nothing against Mr. Stepp, who obviously feels as he does and is of course entitled to those feelings. But did Sewell find anyone else to say something similar to what Stepp said?

He found someone who "didn't vote in the last election but is motivated to vote for Clinton." That certainly doesn't count.

He found a "Clinton supporter" who speculated that "many Republican neighbors are probably having awkward conversations with their young daughters about Trump and women." However, "She said she expects most will still vote Republican." There's nothing specific there.

He found someone who says she's "used to being 'the token Democrat' on her block in Mason" who claims that Republicans she knows who won't vote for Trump "just won't vote for president." That doesn't count either.

Well, here's something which would appear at first glance to be a very tiny bit of confirmation. But it really isn't:

Warren County Republican Lori Viars, an anti-abortion activist, said she could "count on one hand" people she knows who say they won't vote for Trump in an area with many evangelical Christians. Like her, they are focusing on the next president's potential to fill the Supreme Court vacancy and other federal judgeships, and what that could mean for abortion law and religious expression.

"I absolutely do not approve of some of the things that Trump has said," Viars said. "But people are going to vote for him because the alternative could change our lives forever."

I can attest that Viars, an activist for decades, is in touch with hundreds, if not thousands, of pro-life activists and other conservatives in Southwestern Ohio (aside: It's not "anti-abortion," AP; if you don't get the distinction, look at what has happened in California now that assisted suicide is legal). If Viars can only count Trump-to-Clinton switchers "on one hand," we're looking at an infinitesimal movement.

By contrast, your humble servant, who is significantly less connected than Viars, needs far more than "one hand" to name specific people who voted for Barack Obama in 2008 and 2012, but now feel intensely betrayed by what has happened in the past eight years. They are eagerly supporting Trump.

Sewell also spoke with a woman who "stopped by a Trump office in West Chester the other day to pick up yard signs":

"I think he (Trump) can change America," said (Dorothy) Nicholas, who said she lost her auto parts factory job when the work was moved to Mexico. "If we elect her, she's just going to continue this administration."

Note that Sewell didn't tell us Nicholas's party or her past voting preferences. The limited information provided indicates that she fits the profile of blue-collar workers who tend to vote for Democrats.

Sewell then noted Victoria Alvarez, an "art gallery owner" who "had a Clinton sign up," and who claimed that strangers "called her to thank her for showing support for Clinton." If she were a Republican, Sewell would surely have told us. (Though she could reside elsewhere, I was not able to confirm that Alvarez is a registered voter in Warren County.)

Finally, Sewell found a Republican who "said he doesn't really like Trump, 'but he just happened to win (the primaries).'" He also has a "Hillary for Prison" sign in his yard.

That's it. Dan Sewell utterly failed to identify a second specific Republican who is in step with the aforementioned Mr. Stepp and has moved his or her support to Mrs. Clinton. Yet he based his entire "Some waver from Trump" premise on Mr. Stepp and a conservative activist's reference to being able to "count on one hand" supposedly staunch Republicans who are voting for Clinton out of the hundreds or thousands of people she knows.

Rush Limbaugh saw Sewell's dispatch yesterday, and contrasted his effort to build a meme based on one guy to how the press ignores record-breaking crowds at Trump rallies — because, well, those crowds merely represent "anecdotal" evidence that doesn't mean or prove anything:

... this always happens. The AP's always able to find a Republican fed up with his nominee. They're always able to do it at this stage of the campaign. ...

... It never ceases to amaze me how the AP always finds Republicans to say exactly what the AP thinks. Isn't that amazing? Isn't that funny? The AP always is able to go out there in the deepest red part of America and find a Republican that thinks exactly like the AP does, and especially the Millennial, the 29-year-old, why, it couldn't get any more perfect.

And, you know what? What is the word of one guy? It's anecdotal, is it not?

... we're not supposed to pay attention to anecdotal news. It's just not scientific enough. I mean, it's just one guy. And yet the AP is signaling that this one guy and his opinion means Hillary Clinton landslide. Yet 15,000 guys and women at a Trump rally, no, no, no, that doesn't mean anything, Mr. Limbaugh.

... one guy in Warren County, Ohio, 29 years old claiming he's voting Hillary to save the Republican Party ... is enough of a news story to shape an entire story that is based on the premise that Trump is going to lose big because Hillary's brilliantly out there working Republican-dominated suburbs to find angry Republicans.

I'm not going to claim to have deep, comprehensive knowledge of the thoughts of Southwestern Ohio residents on the presidential election. But I can tell you that Dan Sewell and the AP, while pretending to be spotting a trend, don't have a clue, and are instead determined to ignore evidence that doesn't fit their preconceived notions.