In a hysterical dispatch otherwise shredded nicely by John Hinderaker at Powerline, the Associated Press's Jill Colvin insinuated that Donald Trump's concerns that the election is being rigged against him — with his primary complaints justifiably directed at an establishment press which has been undeniably colluding to do that — will cause his supporters to riot if he loses.

To make her case, Colvin found someone in the crowd at Trump's Portsmouth, New Hampshire rally whose answer clearly indicated that she had asked him if Trump's supporters will riot. She also portrayed Milwaukee County Sheriff David Clarke as over the edge in using a word which President Obama himself has used. Finally, she seems to have missed the fact that one current and another former Black Lives Matter activist promised riots if Trump wins months ago.

Here are the relevant paragraphs in question from Colvin's diatribe:

Peter Kostruba, a Trump supporter who traveled to his Portsmouth rally from Barnet, Vermont, with his 10-year-old son, said he's not expecting riots to break out if Clinton wins, but he sees sharper divisions in the country.

"It definitely feels like the odds are stacked, whether it's the legal system or the voter system," Kostruba said. "I don't think you're going to see all of this group here arm themselves and mobilize, but, you know, we're probably not too many years away from that if things keep going the way we're going."

On a similar theme, a prominent Trump supporter who spoke at the GOP convention last summer, Sheriff David Clarke Jr. of Wisconsin's Milwaukee County, tweeted Saturday: "It's incredible that our institutions of gov, WH, Congress, DOJ, and big media are corrupt & all we do is bitch. Pitchforks and torches time." Clarke, an elected Democrat, illustrated his tweet with a photo showing angry people with clubs and torches.

So let's take the four bolded items in order. 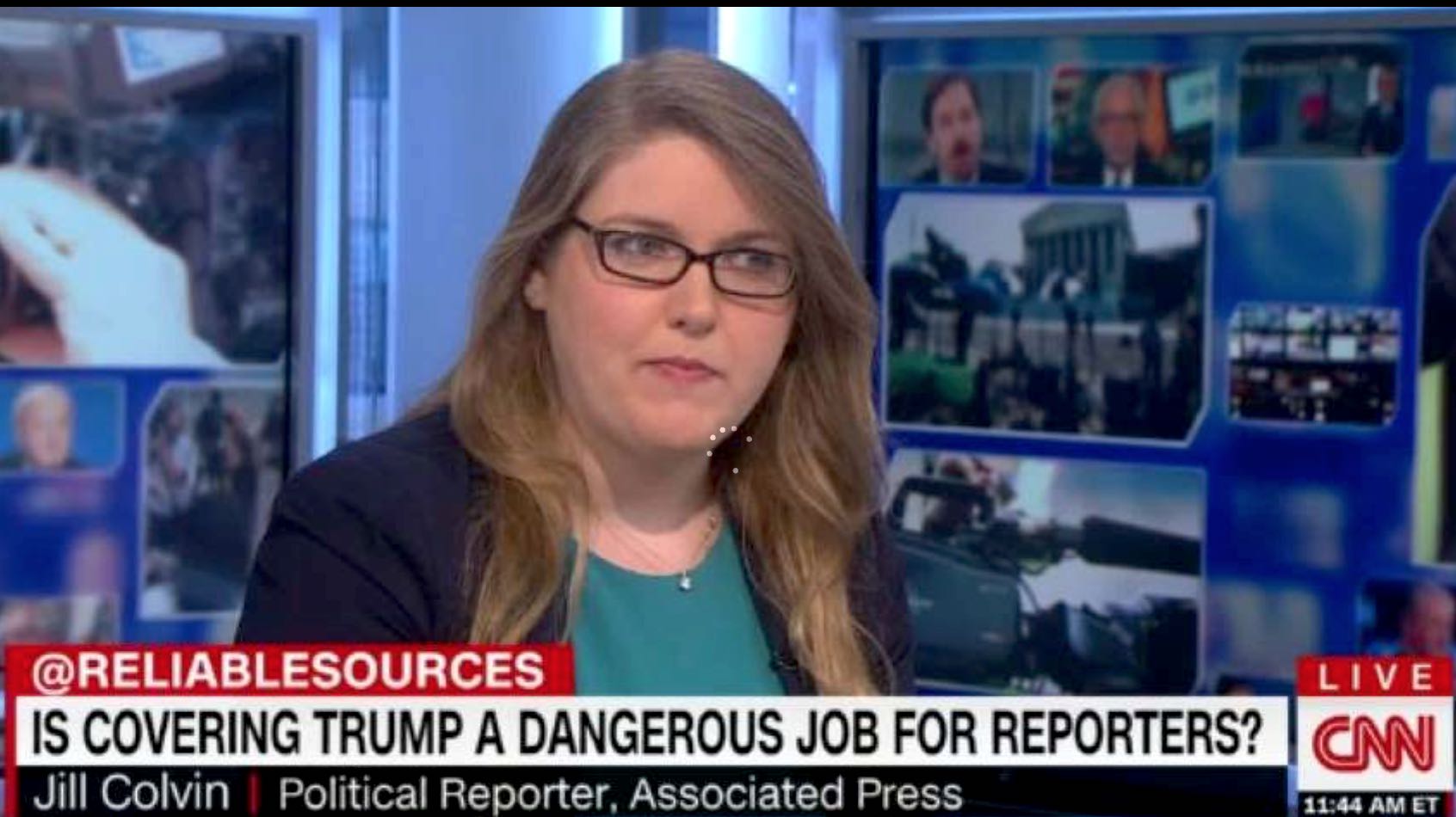 First, nobody tells a reporter that they're not expecting riots unless they have been asked if they think their candidate's supporters are going to riot. One telltale sign: the lack of quote marks. Mr. Kostruba probably didn't even say the word "riot" himself. Why did Jill Colvin ask such a loaded question? In hopes of getting a "yes." Instead (perhaps after asking the question several times and getting nowhere, deciding to use Kostruba's because it was the best she could hope for from an instinctively nonviolent crowd), she got a thoughtful response which she thought she could still frame as threatening.

As to the "odds are stacked" portion of Mr. Kostruba's response, on Thursday, he demonstrated that he's aware of the noncitizen and other voter fraud which has been substantiated and has clearly become more widespread than it was even four years ago. The deniers at AP continue to insist that it's all in our imaginations. Colvin's contribution, in earlier text: "Trump has repeatedly claimed without offering evidence that election fraud is a serious problem." He shouldn't have to, Jill. James O'Keefe has offered plenty. Good government groups in Virginia, Colorado and elsewhere have offered plenty.

More ominously, the leader of the free world indicated on Thursday that he would be quite interested in "stacking the odds" against New Media:

Recalling past days when three television channels delivered fact-based news that most people trusted, Obama said democracy require citizens to be able to sift through lies and distortions.

"We are going to have to rebuild within this wild-wild-west-of-information flow some sort of curating function that people agree to," Obama said at an innovation conference in Pittsburgh.

So Obama is longing for the good old days when three networks, several major newspapers, a few wire services dominated by the Associated Press, and a few national newsmagazines had a virtual lock on news reporting priorities. How progressive. Most people "trusted" them because there was no alternative, and there were few if any watchdogs with teeth. Now there are alternatives, and though the watchdogs still aren't as influential as they should be, their ability to expose malfeasance, corruption, waste, fraud and abuse have caused Old Media and Big Government to abandon their civil veneers, exposing their hostility towards free speech and representative government, respectively.

What Obama clearly wants is a "curating process" which enables status quo-defending and progressive agenda-advancing news outlets an insurmountable advantage over all others. Since the other outlets already have platforms, unlike during first four decades after World War II, the only way to put the genie back into the bottle is to marginalize those platforms or take them out of existence.

So, getting to the third bold item, Mr. Kostruba is not out of line at all when he suggests that a government which insists on continuing to restrict basic freedoms is "probably not too many years away" from active resistance.

This should hardly be controversial, especially because at least two of the left's useful idiots disguised as activists promised riots if Trump wins months ago. Examples (cleared of profanity and racism):

Since Jill Colvin was so interested in whether the losers on November 8 might riot, why didn't she cite any of this?

Finally, Colvin's hit on Sheriff Clarke conveniently forgot that it's President Obama who thought so fondly of people with pitchforks — on his side — and was willing to not so subtly threaten to use them in a meeting about the topic of bankers' bonuses:

But President Barack Obama wasn’t in a mood to hear them out. He stopped the conversation and offered a blunt reminder of the public’s reaction to such explanations (about the need for competitive banker compensation). “Be careful how you make those statements, gentlemen. The public isn’t buying that.”

“My administration,” the president added, “is the only thing between you and the pitchforks.”

Obama must have believed he had activists ready to act in support of his position on bankers' bonuses with at least a plausible threat of violence if they didn't fall in line. David Clarke, while he appears to be serious, is reacting to systemic, pervasive corruption. And what's worse, a possible overreaction to that corruption in a tweet, or a day-to-day existence involving denial that it exists and facilitation of its continuance, which has all too often been the Associated Press's virtual stock in trade?

As to Sheriff Clarke, Colvin conveniently forgot this tweet: "Our system of justice broke down & ceased to be legitimate when Mrs. Bill. Clinton destroyed evidence, lied to its agents & got away with it." That's not a fringe opinion, ma'am, and if you really think it is, you've proven that you're a part of the problem.

Powerline's evaluation's of Colvin's post is worth noting as a wrap:

Trump says the election is rigged because a corrupt media establishment is trying to elect Hillary Clinton, and with her own reporting, Colvin demonstrates that he is right.