In Bangladesh on Monday, Secretary of State John Kerry had a concern about media coverage of terrorism he felt he needed to communicate, namely that "the media would do us all a service if they didn’t cover it quite as much." That would be a great thing, apparently, because then "People wouldn’t know what’s going on." You can't make this stuff up.

The dateline location at Diplomatic Writer Matt Lee's August 29 story at the Associated Press on Kerry's related speech indicates that he is accompanying the Kerry entourage on his current trip. Lee, who has acquired a reputation as a pesky questioner at State Department briefings in DC, failed to include Kerry's media-related remark, obviously the most controversial element in his speech, in his report. This move by a veteran reporter at the nation's de facto gatekeeping wire service likely influenced the three major broadcast networks, as Curtis Houck at NewsBusters noted Tuesday evening, to almost completely ignore Kerry's remark in their recent newscasts. 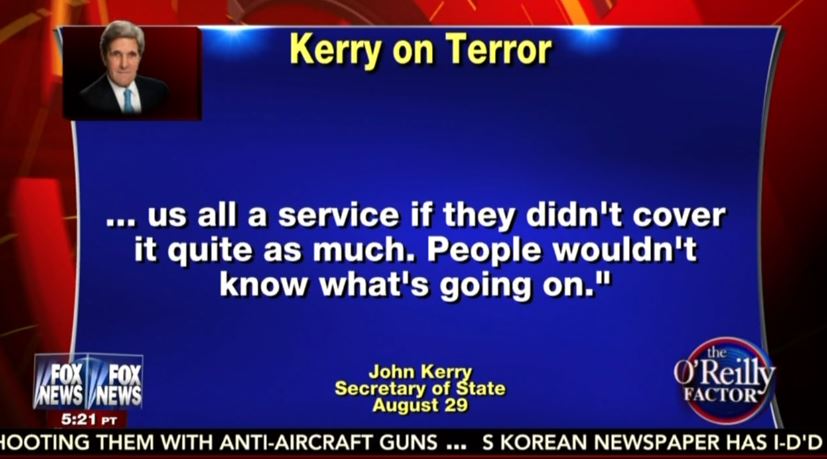 No country is immune from terrorism. It’s easy to terrorize. Government and law enforcement have to be correct 24 hours a day, 7 days a week, 365 days a year. But if you decide one day you’re going to be a terrorist and you’re willing to kill yourself, you can go out and kill some people. You can make some noise. Perhaps the media would do us all a service if they didn’t cover it quite as much. People wouldn’t know what’s going on. (Applause.)

The main beneficiaries of people who don't "know what's going on" are governments and their cronies who benefit from their ignorance. The idea that keeping most people ignorant discourages increases in the number of terrorists, who are being continually being recruited or egged on in jihad-sympathetic mosques around the world and over social media, is laughably absurd.

Here are several paragraphs from Lee's AP report, including three deeply ironic passages about what Kerry thinks about the worldwide terrorist threat and what Bangladesh needs to be doing to fight terror (bolds are mine throughout this post):

KERRY URGES BANGLADESH TO STEP UP EFFORTS AGAINST TERRORISM

U.S. Secretary of State John Kerry called Monday for Bangladesh to step up efforts to fight extremist violence, come to terms with links between local and international militants and protect and promote human rights.

Kerry made his first trip to Bangladesh as America's top diplomat amid increasing concern about terrorism in the South Asian nation after of a series of militant attacks.

... Kerry spoke pointedly of the transnational threat posed by terrorism. The July 1 attack on Dhaka's Holey Artisan Bakery (which, noted in a previous paragraph, "killed 20 people, including 17 foreigners, at a popular restaurant") "was an outrage clearly designed to divide Bangladesh, designed to try to cut off this welcoming society from the outside world," he said.

... "These heinous acts of violence - and too many others worldwide - are a stark, painful reminder that those who aid terrorist groups or perpetrate these acts have no respect for national boundaries, no concern for the rights of others, no regard for the rule of law," he said.

... Kerry urged the government of Bangladesh to resist the temptation to shut down public debate or stifle opposition groups as a way to combat the threat.

"Democracy," he said, "still provides the most resilient and reliable platform we have for preventing and responding to violent extremism ... to defeat terrorists, we must uphold, not betray, the democratic principles we cherish and they abhor."

So, in John Kerry's world:

Lee's obligation to report what Kerry suggested to the media about stifling its coverage is all the more important because of how utterly opposed it is to the "democratic principles" Kerry claimed to espouse. No need for commentary, Matt; just tell us what he said. That would be plenty.

We also should remember that John Kerry and the Obama administration's wish to downplay or stifle media reporting of terrorism has already been partially granted.

Reuters, one of the world's leading wire services, has an official policy which appears to date back at least to the 9/11 terrorist attacks in the U.S. not to use any form of "terrorism" in its writeups to describe specific events unless a quote person says the word or words, as seen in this excerpt from its Handbook:

“Terrorism” and “terrorist” should not be used as single words in quotation marks (e.g., “terrorist”) or preceded by so-called (e.g., a so-called terrorist attack), since that can be taken to imply a value judgement. Use a fuller quote if necessary.

“Terror,” or “terror attack” or “terror cell,” should also be avoided to describe specific events or groups, except in direct quotes.

Report the subjects of news stories objectively, describing their actions, identity and background.

Shorter Reuters: Be objective, unless an attack is objectively an act of terrorism.

As would be expected, former UN Ambassador John Bolton, appearing on Fox News yesterday with Martha MacCallum, was unimpressed with Kerry's "logic." Bolton noted that Kerry's stance consistent with the Obama administration's general insistence that terror attacks are just isolated, lone-wolf events, and not part of a any coherent strategy (yes, that seems to contradict some of what Kerry said above as cited by Lee, but the Obama administration has often been incapable of articulating its thoughts consistently).

Bolton also had a suggestion as to where Kerry might seek employment after his stint as Secretary of State ends:

MARTHA MACCALLUM: Secretary of State John Kerry, while in Bangladesh this morning, saying that part of the problem with terrorism is the media covering it so much. Kerry said this: "Perhaps the media would do us all a service if they didn’t cover it quite so much. People wouldn’t know what’s going on."

He fleshed that out by saying that he thought that it encouraged others to commit terrorist acts when they read about it for saw it on television that others were doing it.

John Bolton, former US ambassador to the UN, a Fox News contributor, and senior fellow at the American Enterprise Institute, joins us this morning. Ambassador, welcome.

MARTHA MACCALLUM: President Obama made similar comments a while back, basically saying that the the problem wasn't as big as it appears, but that it just gets, "If it bleeds it leads," I believe is what he said. Your thoughts.

BOLTON: Well, I think this is the perfect embodiment of exactly how they see the terrorist threat, that it's just a series of unrelated unfortunate incidents that don't amount to a coherent threat and that it's precisely things like publicity and attention that inspires other people, who are probably economically downtrodden, to get up one day and commit a terrorist act.

You know, if you believe everything is unrelated to any ideology, this, this make sense to them. Obviously, this is the farthest thing from the truth. King Abdullah of Jordan has called the threat of Islamic terrorism part of a war within Islam, and it is a war primarily directed against us. So if you really think that, uh, that less publicity would help reduce the terrorist threat, you should apply for a job after you're Secretary of State to be the editor-in-chief of The Onion. They'd probably jump at you.

Matt Lee's failure to report what Kerry said would seem to indicate that he enjoys barking at State Department briefings, but has no bite when it comes to genuinely informing those who read, listen to and watch wire service-generated content.