According to a statement at the city's web site, Fairfax, Virginia Mayor Richard "Scott" Silverthorne's resignation took effect at noon on Thursday. The resignation occurs a week after Silverthorne was arrested "for allegedly trying to exchange methamphetamine to undercover detectives in exchange for sex, city officials said Monday."

The press, as has so often been the case in situations involving Democrats, has been very reluctant to report Silverthorne's party affiliation, either avoiding the tag entirely or delaying it until their stories' very late paragraphs.

Fairfax, with a population of about 24,000, is a Northern Virginia suburb of Washington, and is the county seat of Fairfax County (population 1.1 million). Silverthorne was in his third term as city mayor.

The Washington Post's Friday coverage of Silverthorne's arrest last week waited over two dozen paragraphs to tell readers that he is a Democrat (bolds are mine):

Scott Silverthorne built a reputation as a civic pillar of Fairfax City, Va., over three decades, helping bring a park to the affluent suburb’s downtown and championing other improvements during his stints as a City Council member and mayor. 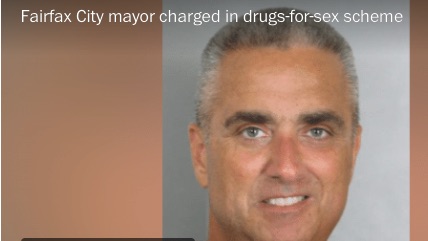 But even as he was the public face of the city, police said, Silverthorne was privately leading another life online: using a website to swap methamphetamine for sex with other men.

The arrest marked a stunning downfall for Silverthorne, who had followed his father into the mayor’s office, recently beaten cancer and coped with the loss of his job and house. Through text messages, Silverthorne declined to discuss the charges.

... “(in mid-July) We were provided with information from a citizen that the mayor was involved with a website,” said Capt. Jack Hardin, commander of the Fairfax County police organized crime unit. “It was alleged he was exchanging meth for sex.”

Detectives created a fake profile on the site, which police declined to name, in an effort to lure Silverthorne, police said. Two days later, they said, Silverthorne messaged the account, saying he could provide drugs in exchange for group sex.

The group waited about 20 minutes for Silverthorne’s methamphetamine supplier to arrive, police said. When he did, Silverthorne allegedly acquired about two grams of meth, then returned.

... A Fairfax native, Silverthorne, a Democrat, was elected in May to serve his third term in the nonpartisan office of mayor. He has previously served nine terms on the City Council. And his father, the late Frederick W. Silverthorne, served as mayor of Fairfax City in the late 1970s and early 1980s.

The following news stories failed to identify Silverthorne's party at all:

By contast, Heavy.com's initial coverage of the Silverthorne situation ("Richard ‘Scott’ Silverthorne: 5 Fast Facts You Need to Know") at least tagged him as a Dem as part of its Item 1.

There isn't a chance in Hades that the press would be so reluctant to name the party of a Republican or conservative involved in similar circumstances. Evidence: In 2011, the AP got a "Republican" tag into Paragraph 2 in a story about the resigning mayor of Medford, New Jersey over involvement in (yes) a "gay sex" scandal.