If we had today's establishment press covering America just before the Revolution, few would have learned of Patrick Henry's "Give me liberty or give me to death!" If they had been covering the Revolutionary War itself, there would have been a blackout on Nathan Hale's "I only regret that I have but one life to lose for my country."

Today's establishment press does anything and everything it can to keep important statements by people it despises out of the news. Thus, despite regularly perusing media outlets on a daily basis, it is intensely frustrating that I only learned about Israeli Prime Minister Benjamin Netanyahu's unforgettable five-word fundamental truth about Islamic terrorism by reading an Investor's Business Daily editorial.

Netanyahu was speaking via satellite to attendees at an AIPAC conference on Tuesday, shortly after the Islamic State terror attacks in Brussels. 31 innocent people and three terrorists died.

After reading the IBD editorial, the only transcript I found in a Google News search came from a site called Mondoweiss which headlined the transcript as "Back to Theatrics." Here's why:

Netanyahu is known for using props and visual aids in his international addresses. Today was no different.

So the site, in using its "Back to Theatrics" headline, was complaining that Netanyahu did what any competent speaker who wants to drive home his or her points should do if given the opportunity.

Here is the second paragraph (following opening-paragraph formalities), with its five key words in bold: 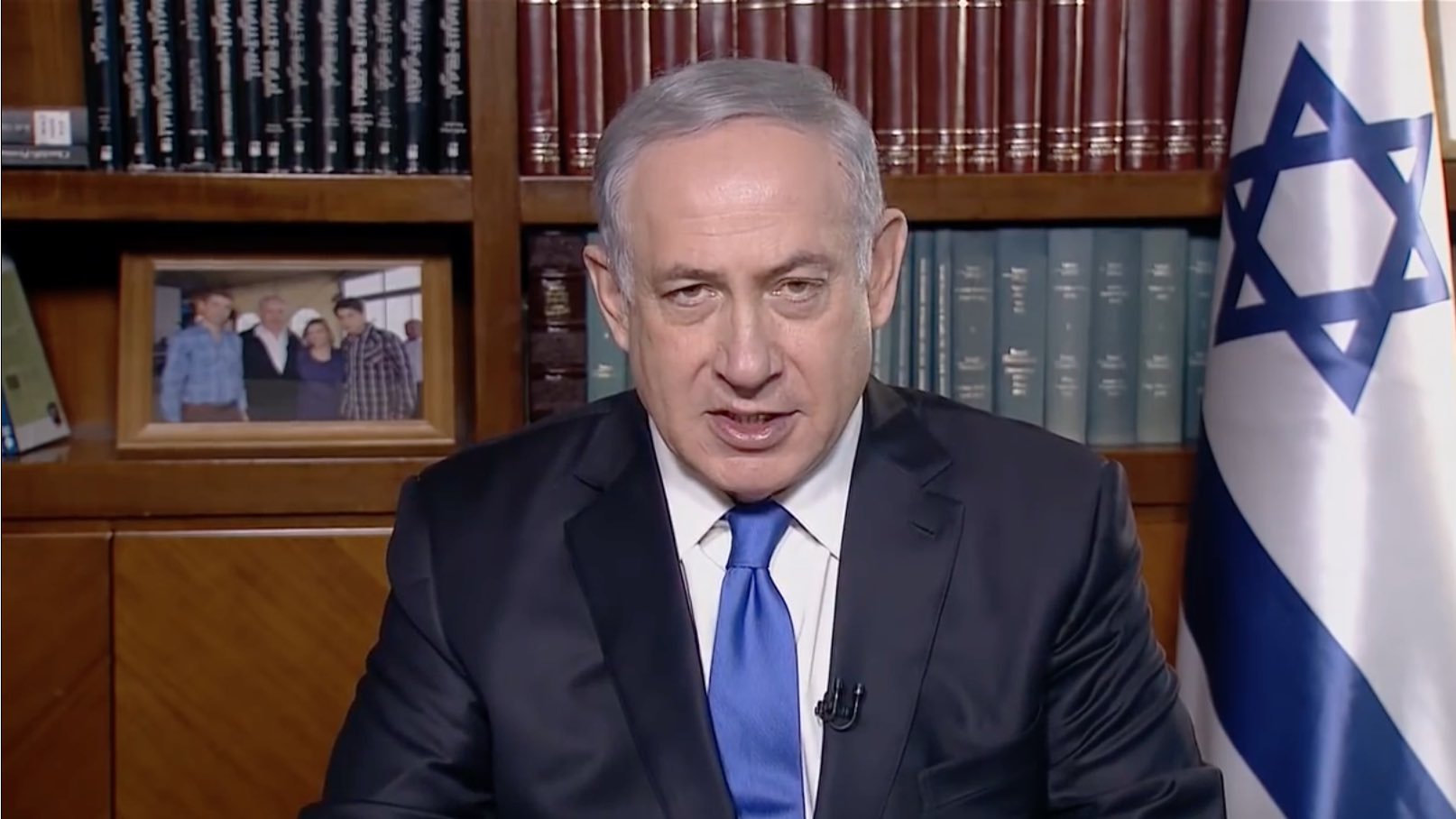 I first want to send my condolences to the families of those murdered in today’s terrorist attacks in Brussels. The chain of attacks from Paris to San Bernardino to Istanbul to the Ivory Coast and now to Brussels, and the daily attacks in Israel – this is one continuous assault on all of us. In all these cases the terrorists have no resolvable grievances. It’s not as if we could offer them Brussels, or Istanbul, or California, or even the West Bank. That won’t satisfy their grievances. Because what they seek is our utter destruction and their total domination. Their basic demand is that we should simply disappear. Well, my friends, that’s not going to happen. The only way to defeat these terrorists is to join together and fight them together. That’s how we’ll defeat terrorism – with political unity and with moral clarity. I think we have that in abundance.

As to Bibi's final seven words, referring to political unity and moral clarity ("I think we have that in abundance"), it would be nice to believe that he's right. Sadly, there's strong reason to believe that he is wrong.

Here is what IBD had to say about Netanyahu's speech (bolds are mine):

Israeli Prime Minister Benjamin Netanyahu proved that brevity is the soul not only of wit, but of wisdom. As others ponder why Brussels happened, he explains: “Terrorists have no resolvable grievances.”

Speaking via satellite to AIPAC’s annual conference in Washington last week, Bibi Netanyahu used the Brussels bloodbath, which Islamic State has taken responsibility for, to explain succinctly why there is no appeasing this barbaric new enemy.

The Israeli leader identified “the chain of attacks from Paris to San Bernardino to Istanbul to the Ivory Coast and now to Brussels, and the daily attacks in Israel” as “one continuous assault on all of us.” And he reminded Americans that, “in all these cases, the terrorists have no resolvable grievances.”

Those five words, “terrorists have no resolvable grievances,” should be the equivalent of “in hoc signo vinces” for the global war on terror. Those were the Latin words Constantine saw in a vision, accompanying a cross of light — “In this sign you will conquer.”

It simplified everything. Similarly, Netanyahu’s words should focus free people in the long war against purveyors of terrorism in the years ahead, by remembering that there is no way to buy off those who send suicide bombers into crowded transportation hubs, sports arenas, shopping centers and major workplaces like the Twin Towers.

... Netanyahu’s words ... should be carved in stone for the ages and spur total commitment to the destruction of today’s terrorists — everywhere and ASAP.

A Google News search on "terrorists have no resolvable grievances" (in quotes, past week, sorted by day, showing duplicates) returned 61 items. All but five were center-right, non-U.S., or Jewish news outlets. Only The Hill, the Wall Street Journal (same item also present at NASDAQ.com), Voice of America, and the Boston Globe (with a Bloomberg News story) had stories which carried the quote.

The civilized world is at war with Islamic terrorism. France's President, a socialist, has said so for months. 60 percent of America agreed four months ago, weeks before the San Bernardino terrorist attack.

In this instance, the press may may be having a snit fit over the fact that Netanyahu decided not to visit the U.S. to make his AIPAC speech. As a result, he also won't be visiting Dear Leader, and this is somehow a big snub. If Israel's government is less than pleased with the Obama administration, there's a really good reason: Its apparatchiks tried, and fortunately failed, to defeat Netanyahu in elections in Israel last year.

Regardless, of the motivation, it's extremely irresponsible for the establishment press to fail to quote Netanyahu's primary point made in very important speech.