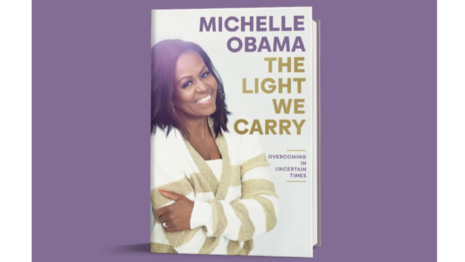 Ed Morrissey tweeted back to Shapiro: “The secret to success in life: Find someone who loves you as unconditionally and fiercely as the mainstream media loves the Obamas.”

Except they’re not “mainstream” at all. These “objective newspapers” are blatantly leftist partisan rags, as they demonstrate on a daily basis.

Shapiro quoted this saccharine passage about the Blessed Michelle: "She is on a journey. Through her stories, experiences and thoughts, we’re finding the light with her. Lucky us." Michelle’s publishers tweeted out this quote...and then Newman retweeted the publisher, like they’re all in the business of selling Michelle Obama.

So the people buying (and paying) Mrs. Obama are lucky, and so are her pals. Newman added, “The fact that she loves ‘lowbrow TV’ and counts the hilarious but racy Ali Wong among her favorite comedians says the world about who Obama is when she gets together with those friends. Lucky them.”

The first line of Newman’s glittery-boot-licking review is “It’s not easy being Michelle Obama. Fabulous, yes. Easy, no.” 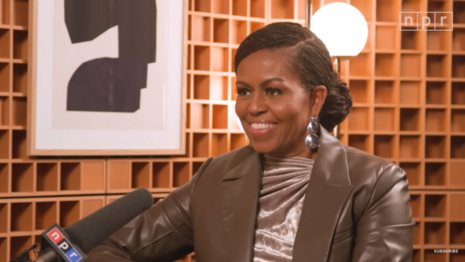 Later, she decries the “explosion of divisiveness” under Trump, typically ignoring any introspection about the left-wing media endlessly and divisively smearing conservatives.

Newman complained: “You think it was painful for you to see a reckless crew in the White House? Try being the Obamas, knowing as you toss them the keys that so much of what you had worked for was about to be shredded like a cheap dog toy.”

Just see Newman’s own tweets for her partisan background. She’s sharing feminist Hillary Clinton tweeting “It turns out women enjoy having human rights, and we vote,” and retweeting praise for John Fetterman’s social-media producer Annie Wu, “the genius who has been embarrassing Dr. Oz online this year. She is incredible and deserves our praise.”

When Barack Obama’s memoir came out right after the 2020 election, their New York Times book review also was destined to become a sales pitch. The publisher happily and repeatedly regurgitated author Chimamanda Ngozi Adichie: “Barack Obama is as fine a writer as they come....[A Promised Land] is nearly always pleasurable to read, sentence by sentence, the prose gorgeous in places, the detail granular and vivid.”

Now consider that just three months ago, Times book reviewer Dwight Garner shredded Jared Kushner’s White House memoir. It was “earnest and soulless — Kushner looks like a mannequin, and he writes like one.” Garner sneered in print: “Reading this book reminded me of watching a cat lick a dog’s eye goo.”

When Jared’s wife Ivanka Trump assembled a motivational book, the Times assigned the review to Jessa Crispin, whose Twitter account is the “The Book Slut.” Crispin wrote: “It reads more like the scrambled Tumblr feed of a demented 12-year-old who just checked out a copy of Bartlett’s Familiar Quotations from the library.”

Crispin tweeted: “The New York Times forced me to read the Ivanka book. Which cleanse is best for toxins in the brain?”

Quoting these reviews does not mean that these books are good books. It means that you can’t trust The New York Times to judge for you because their reviews of the Trump books sound more like they’re performing stand-up comedy for a rabidly left-wing readership. You can’t trust their Obama book reviews because they read like a gelatinous trail of happy tears and sputum.