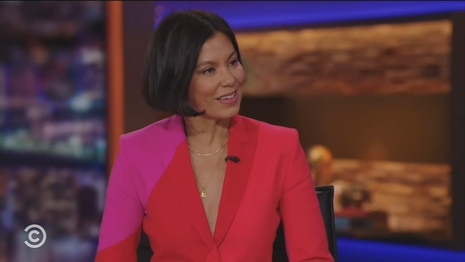 In an interview with Deadline.com, MSNBC host Alex Wagner -- now filling in four of the five nightly shows in the Rachel Maddow hour -- hopes to "dismantle or at least undercut" right-wing lies. That's a not-so-veiled attack on Fox News (and clickbait for Brian Stelter).

“It’s incredibly distressing to talk to people on the ground and realize that a third to nearly half of this country is living in a parallel universe,” she said. “And I think the urgency of the hour is figuring out how to dismantle, or at least undercut a system that has effectively spun a web of lies for the American public, and it has had an incredibly deleterious effect on American democracy. It’s the $1 trillion question, and I’m not entirely sure how we answer it, except that we keep pushing for the truth, and we keep asking people, and challenging their beliefs if they’re founded on lies.”

MSNBC always thinks they're the antidote for Fox:

“I think everybody should keep an eye on what’s happening on Fox News,” she said. “It’s our responsibility to make sure that when information is out there that is not true, that we as journalists are purveyors of the truth. So am I going to spend all my time talking about Tucker Carlson? Listen, there is enough happening in the world that is important to cover, that one has to make choices, and I’m not saying this to get into some cable tit for tat. But Fox has has a profound effect on American democracy, and it’s important to understand what is happening over there.”

Of course, Wagner found it necessary to honor Maddow, and her superfans: "We are trying to figure out the ways we can carry through some of the incredible intellectual rigor and informative analysis that Rachel has established in the 9pm hour, and how we can make a through line with what we do Tuesday through Friday, and also add in some new elements that are reflective of my experience," Wagner said.

In recent weeks, Maddow gets a million more viewers on her Monday night program than MSNBC gets with rotating hosts on the other weeknights.

In his story on the new show, AP media reporter David Bauder offered only gush for Wagner:

“They hope that they’ll be able to turn her into a star,” said Mark Feldstein, professor of broadcasting at the University of Maryland. “This is a big void with Rachel stepping back, and Wagner has the star power to do it. It’s kind of surprising to me that she isn’t one already, since she’s smart and very good on television.”