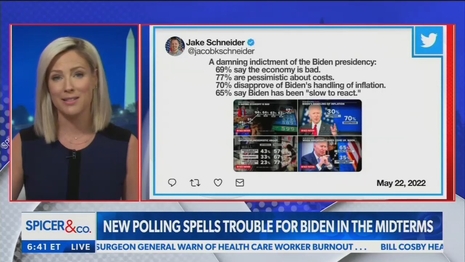 On Newsmax's Spicer & Co. on Monday night, we talked about a new poll from CBS News that found 69 percent of those surveyed think the economy is “fairly” or “very” bad, and 70 percent disapprove of President Biden's handling of inflation.

That caused me to bring up that under Trump, the networks were highly allergic to reporting the good news. Record-low unemployment rates (including for women and minorities) and record stock-market highs were routinely skipped by the network "news" shows.

Four years ago, the Trump team felt they already had a record of success on the economy, and the network preferred to obsess over what else? Russian collusion claims. If they was a market crash, they would jump on that. As they led with a bad market day on NBC Nightly News on May 7, 2017, Stephanie Ruhle insisted Trump's " pro-business policy promises" would be "hanging in the back. Right now, all focus is on Russia!"

ABC anchor David Muir didn't want to talk about stocks in 2018 when he could lead his show with the "tell-all" gossip book by Michael Wolff: "Steve Bannon turning on this White House, turning on the President's family. President Trump's onetime chief strategist and close friend now calling that meeting at Trump Tower between Don Jr., Jared Kushner and that Russian lawyer...quote, 'treasonous'!"