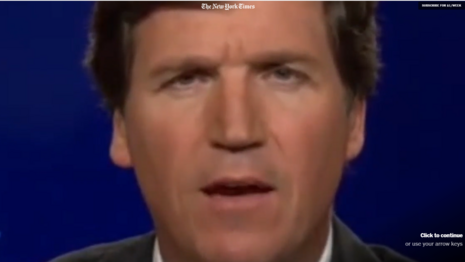 Why would the New York Times publish almost 20,000 words inveighing against "apocalyptic" Tucker Carlson and his "racist" show? Because they want to destroy his show on Fox. MSNBC is happy to help.

The byline on this massive term paper is Nicholas Confessore, an MSNBC contributor and someone Nicolle Wallace calls "a friend of the show." Somehow, MSNBC thinks it can express with a straight face that Tucker's show is remarkably polarizing -- unlike MSNBC?

What was most amusing in the paper was how they expressed some form of disgust that Tucker Carlson would speak mockingly of Barack and Michelle Obama, and even Chelsea Clinton. The liberal media took umbrage that "Mr. Carlson" could attack them so flippantly.

He said Colin Kaepernick hates America! And that Bill Nye is a Fake Science Guy! He once said Dr. Fauci wants you to avoid your family on Christmas and definitely skip going to church. (Because it was two weeks to stop the spread.) The Times wanted to end Bill O'Reilly's Fox career, and now they're gunning for Tucker.