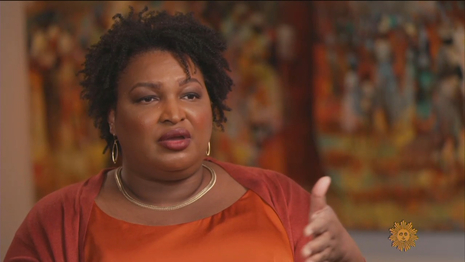 The Associated Press, like most Democrats, loves Stacey Abrams, so there's a story on happy news in her latest financial disclosures.

From Atlanta, reporter Jeff Amy began: "When Democrat Stacey Abrams first ran for Georgia governor in 2018, her lackluster personal finances and a hefty bill from the IRS gave Republicans fodder to question how she could manage a state budget when she struggled with her own debts. As she launches a second bid this year, that’s no longer an issue."

Her rapid ascent into millionaire status corresponds with her rise in national politics. Since her 2018 defeat to Republican Brian Kemp, Abrams has become a leading voting rights activist. She was considered as a potential running mate to President Joe Biden and is widely credited with organizing voters in Georgia to help him become the first Democrat to carry the state in the presidential vote in 28 years. Along the way, she has earned $6 million, mostly driven by $5 million in payments for books and speeches.

On Amazon, you can see Abrams has a business manual she co-authored and a bunch of novels, including some she originally issued with the pen name "Selena Montgomery." So those Republicans are now going to tag her as rich and out of touch with the common folk.

Garrison Douglas, a spokesperson for the national Republican Party, accused Abrams of using her campaign “as a platform for her own financial gain.” During a rally in the state last month, former President Donald Trump knocked her for “living in these gorgeous multi-multi-million-dollar houses.”

Abrams hasn’t purchased a home for a price tag exceeding $1 million, and Trump spends much of his year living at his lavish Mar-a-Lago resort. The leading Republicans seeking the nomination for governor — incumbent Brian Kemp and challenger David Perdue — are far wealthier than she is.

What all this shows is that the adoration of liberal media (and Democrat social media) can lead to people rewarding her by purchasing her merch.

In an interview, Abrams said it was ironic for Republicans to criticize her financial success, something the party often praises as the result of hard work.

“It is remarkable to me that success is now being demonized by the Republicans,” she said. “I believe in success. I believe that every person should have the opportunity to thrive. And because I had three years where I was in the private sector, I leveraged all three years, and in that time, I’ve done my best to not only be successful personally, but to do what I can to help Georgians.”

Many politicians build their wealth after they reach high office. That’s not the case for Abrams, whose loss vaulted her to a level of celebrity unusual for someone whose highest office so far is minority leader of the Georgia House of Representatives. She particularly cashed in on her status in 2021 before announcing her second bid for governor, with her income spiking to $3.65 million.