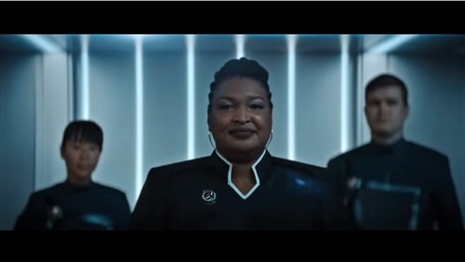 How dumb does The New York Times think we are? One day after the news leaked that Stacey Abrams was making a gaudy cameo as the president of "United Earth" in the Paramount Plus TV series Star Trek Discovery, Times political reporter Maya King wrote a piece of campaign publicity headlined "Why Abrams Isn't Embracing Her Stardom (So Far)."

The subhead was "Running for the governorship of Georgia, she is talking more about Medicaid expansion than voting rights."

Nowhere in the 1,405-word story is there any mention of her Star Trek cameo. Maybe the story was "in the can" before that news broke. But the headline and the spin is still embarrassing.

King reported Abrams is campaigning in little Georgia towns and focusing on policy, not her status as a "national Democrat celebrity" whose name is "synonymous with he fight for voting rights."

But she has shown little desire to put ballot access at the center of her bid. Her first days on the campaign trail have been spent largely in small, rural towns like Cuthbert, where she is more interested in discussing Medicaid expansion and aid to small businesses than the flagship issue that helped catapult her to national fame.

Ms. Abrams's strategy amounts to a major bet that her campaign can survive a bleak election year for Democrats by capitalizing on Georgia's fast-changing demographics and winning over on-the-fence voters who want their governor to largely stay above the fray of national political battles.

My latest: On ⁦@staceyabrams⁩’s focus on hyperlocal policy issues and rural areas in the early months of her gov campaign.

“I am a Georgian first…and my job is to spend especially these first few months anchoring the conversation about Georgia.” https://t.co/ubFpaibd0p

On the opposing side are "critics on the right" who have "aimed to paint her as a sore loser" (Imagine that!) and "Republicans are eager to portray Ms. Abrams as an influential national figure -- but a dangerous, radical one they will try to beat at all costs."

Speaking of "all costs," does anyone expect there won't be tankers of national Democratic money flowing into the Stacey Abrams campaign? Late in the story, the Times allowed one quote from the camp of Gov. Brian Kemp, who beat her in 2018:

But Maya King clearly thinks of Abrams as an inspirational figure, as you can see in another tweet:

At one of her first Atlanta rallies of her 2022 campaign, @staceyabrams making a pitch to voters to turn out and bring others along: “Voting is not magic. Voting is medicine.” pic.twitter.com/lHA1Ey44oO

PS: Here's a clip of Abrams as President of Earth: