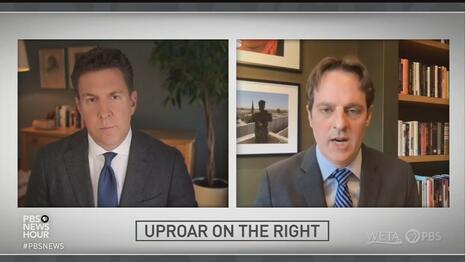 Liberal journalists on Friday rallied around a New York Times article by Charlie Savage titled "Durham Distances Himself From Furor in Right-Wing Media Over Filing."

Like a good Democrat, Savage spun that Durham "distanced himself on Thursday from false reports by right-wing news outlets that a motion he recently filed said Hillary Clinton’s campaign had paid to spy on Trump White House servers."

But Savage story quoted Durham, and his actual argument said something different, distancing himself from anyone overstating or understating his filing:

“If third parties or members of the media have overstated, understated or otherwise misinterpreted facts contained in the government’s motion, that does not in any way undermine the valid reasons for the government’s inclusion of this information,” he wrote.

Savage also spun this in a segment trashing the conservative media ("Uproar on the Right"!) on the PBS NewsHour on Wednesday:

In a segment attacking conservative media on PBS, @nytimes reporter Charlie Savage says it's "ridiculous" to deduce Democrats were warning in February 2017 that Team Trump was using Russian phones around the White House. pic.twitter.com/UYqhJI7Okt

National Review legal expert Andrew McCarthy noted that Durham's filing said Democrat lawyer Michael Sussman was warning the CIA on February 9, 2017 that "Trump and/or his associates were using supposedly rare, Russian-made wireless phones in the vicinity of the White House and other locations." Does Savage & Co. think Trump and his staff were making calls around the White House before taking office?

McCarthy noted that Savage (and Adam Goldman) implied this before in a September story dissing Durham's probe:

[T]he Alfa Bank suspicions were only half of what the researchers sought to bring to the government’s attention, according to several people familiar with the matter. Their other set of concerns centered on data suggesting that a YotaPhone — a Russian-made smartphone rarely seen in the United States — had been used from networks serving the White House, Trump Tower and Spectrum Health, a Michigan hospital company whose server had also interacted with the Trump server.

Mr. Sussmann relayed their YotaPhone findings to counterintelligence officials at the C.I.A. in February 2017, the people said.

But as PBS anchor William Brangham lamented this "mutant story" that the "mainstream press" has to deal with, Savage complained that right-wing outlets don't do journalism like he does journalism: "There's been this repeated cycle of huge alarmism stoked within right-wing pro-Trump outlets that I don't really consider doing the same kind of journalism that I'm doing sending out the message with the blaring outrage, grievance-stroking headlines that now it's been proven they were spying on President Trump."