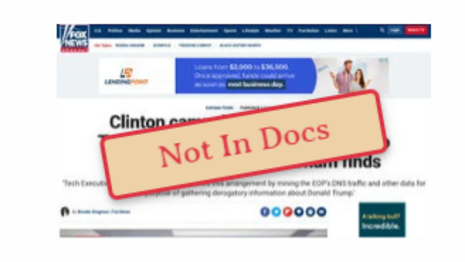 Did Special Counsel John Durham's court filings say the Hillary Clinton campaign in 2016 paid to have servers in Trump Tower and in the White House infiltrated in hopes of establishing a link between Russian operatives and Donald J. Trump? No, that's not true: neither the new filing nor the indictment Durham filed in 2021 about events in 2016 say anyone infiltrated White House or Trump Tower servers. This fact check is only concerned with the claim the Durham filings say the White House and other servers were infiltrated.

The filing says Joffe looked at this data from his employer's client to look for information related to "(i) a particular healthcare provider, (ii) Trump Tower, (iii) Donald Trump's Central Park West apartment building, and (iv) the Executive Office of the President of the United States". It does not say he accessed, connected to or even "infiltrated" any servers owned or operated by any of these entities.

The chronology of events described in the indictment filed by Durham makes claims about White House server infiltration nonsensical.

Then there was Glenn Kessler at The Washington Post: 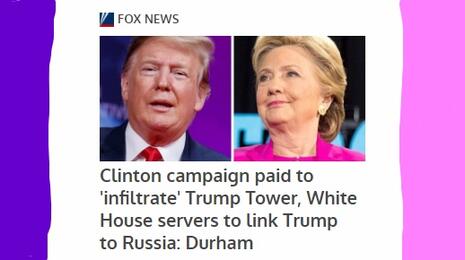 Since being appointed special counsel 16 months ago, after a preliminary investigation lasting 17 months, Durham has filed two indictments. Every subsequent court filing is scrutinized carefully by right-leaning media, sometimes in misleading ways.

For instance, Fox News has reported that Durham alleged that Clinton’s “presidential campaign in 2016 had paid to ‘infiltrate’ servers belonging to Trump Tower and later the White House.” But the word “infiltrate,” even though it is in quotes, appears nowhere in Durham’s filing. Instead that word comes via Kash Patel, a former Trump administration official who offered his own spin on the document.

We'll suppress a wry smile about misleading words in headlines. Glenn Kessler had a funny one a few months back, that "Biden's claim that his 'great grand-pop' was a coal miner mostly pans out." (It didn't pan out.)

Journalists are running around repeating Joffe publicist claims that he was "apolitical." THAT needs a fact check.

As Kimberly Strassel reported at The Wall Street Journal, Joffe "sat" for an October 2018 New Yorker piece that pushed the unfounded Alfa Bank claims, anonymously calling himself "Max." A deposition in the Alfa litigation identified Mr. Joffe as Max.

Here’s the most revealing bit: “Max” also explained to the New Yorker how vitally important it was in 2016 to make sure the threat his team discovered was “known before the election.” Which was why he and his lawyer first went with their information to the press. The Sussmann indictment says Mr. Sussmann tried peddling the data to the New York Times in late August 2016. He didn’t approach the FBI until the middle of September. Mr. Joffe’s spokesperson declined to comment.