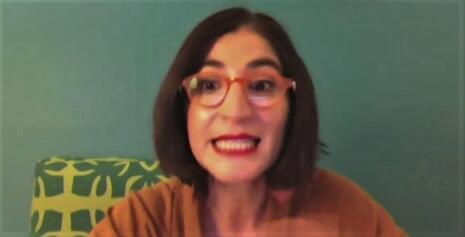 Regular host Peter Sagal was off, so they replaced him with Negin Farsad, an Iranian-born Muslim comedian -- oh, but she defines herself as a "social justice comedian." That's apparently the funniest kind.

The first game was called "Who's Bill This Time?" Announcer Bill Kurtis -- formerly an anchor for CBS News -- impersonates a public figure saying something in the news. So they started with "stupid son of a bitch," and predictably, the liberals joked that many thousands of people agree Doocy is an idiot:

NEGIN FARSAD: OK, so of the thousands of people who said that about Fox News reporter Peter Doocy this week, who was the highest-ranking one?

NEGIN FARSAD: That's right. [Bell rings, applause] President Biden said what a stupid son of a bitch about Fox News reporter Peter Doocy. And, yes, it was a breach of decorum. But in Biden's defense, Doocy is a [bleep].

The panelists then made jokes about Biden's angry insult. Josh Gondelman, who writes comedy for Desus & Mero on Showtime, said "I was surprised. Like, I feel like Joe Biden's public persona is so folksy. Like, you could run over his foot with a motorcycle, and he'd just be like, 'taffy on a stick,' you know?"

Alzo Slade of Vice News added "I feel like Joe Biden is that old dude that just can say whatever he feels like saying, and because... Of his age, nobody is going to care. It's like, yeah, just - you know, that's Uncle Joe. Just let him be. And sometimes you got to call it like it is. If you think he's a son of a [expletive]..."

This is exactly how the liberal media have dismissed Biden's gaffes -- isn't Uncle Joe a character? Then Slade suggested Doocy was an idiot who played know-it-all on TV:

ALZO SLADE: And I think everybody listening to the comment can relate because you've been at a dinner party where it's always some dude that read the front page of The New York Times and listened to NPR for five minutes, and they think they know everything. And then they try to say something and ask you a question to make you look stupid, and then you just want to say, you know what? You a stupid son of a [expletive].

NEGIN FARSAD: No, but I mean, this was like - this was kind of refreshing. This is the Biden we want to see, right? He's, like, unfiltered. Off the cuff and finally using insults that didn't originate in the 1890s. You know?

Farsad wanted President Biden to take his mean-spirited routine to the State of the Union address: "And we're just wondering, like, if this is just a warmup act for the State of the Union. You know what I mean? We'll see Biden going off on anyone who doesn't stand up and clap. Like, Matt Gaetz, no, don't get up. Hey, sorry your girlfriend couldn't be here. I know it's past her bedtime."