In 1964, the Supreme Court issued a “landmark” decision in New York Times vs. Sullivan, which established the very high bar of requiring the smeared plaintiff to prove there was “actual malice” on the part of the media outlet. 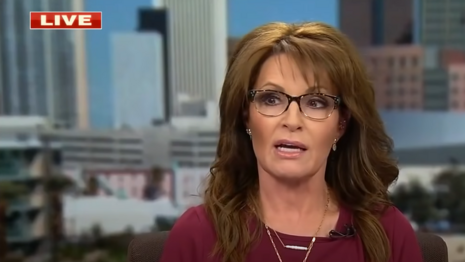 Now The Times is exploiting that standard again in the feisty First Amendment test brought by Sarah Palin. There is no doubt that the liberal media are nervous about this “prestigious” newspaper being forced into court to defend their reckless character assassinations of conservatives.

Palin first sued The Times in 2017 for an editorial after the shooting of congressional Republicans on a Virginia softball field. The Times claimed that when Jared Loughner shot and killed six people in 2011 – and wounded, among others, Rep. Gabby Giffords – “the link to political incitement was clear...Sarah Palin’s [PAC] circulated a map of targeted electoral districts that put Ms. Giffords and 19 other Democrats under stylized cross hairs.”

This was deeply wrong, and it wasn’t an innocent mistake. The Times itself had reported this was untrue! Loughner wasn’t motivated in any way by Sarah Palin or her map. The map merely suggested that 20 Democrats who voted for Obamacare should be defeated in the next election.

In the “Reliable Sources” newsletter, CNN’s Oliver Darcy rolled out legal analyst Jeffrey Toobin to proclaim “Palin is the perfect plaintiff and The New York Times is the perfect defendant for the right to mobilize against First Amendment protections for the press.”

On its face, the idea that The Times had “actual malice” for Palin is transparently obvious. But you have to prove it in their actual working environment. They can merely cry it was an “honest error,” and federal judges will rule for “First Amendment protections.”

The newspaper which boasted in Trump-era advertisements that “The truth -- it’s more important now than ever” goes to court under the banner of “The truth is less important than our intentions.”

To demonstrate that malicious newspapers now spur malicious social media outbursts, Palin’s complaint noted “the widely circulated and heavily promoted Palin Article resulted in hatred and hostility toward Mrs. Palin."  As one example, they cited a Democratic strategist who  tagged Palin in a tweet about the false link between Palin and the Giffords shooting along with the hashtag "#HuntRepublicans.”

In an attempt to shame conservatives into retaining this actual-malice standard, CNN’s Darcy claimed Fox News was dramatically more reckless than the liberal side. “The reporting from mainstream news sources tends to be a lot more buttoned up than reporting in right-wing media. Fox, for instance, is wrapping itself in the First Amendment as it defends itself from lawsuits against voting technology companies Dominion and Smartmatic. Which is to say that the attempts to reduce press freedom on the right could backfire in enormous ways.”

Who was more “buttoned up”? We can establish that Fox News never reported that Dominion and Smartmatic caused a mass shooting. But Toobin agreed with Darcy that Fox needs that Sullivan standard, because allegedly “The New York Times made a single mistake and behaved responsibly. Fox was the gateway for a torrent of lies that nearly destroyed these companies and has never appropriately apologized.”

The central irony in this case is that media outlets despise going through the process of serving up their own internal memos and having their own professional behavior evaluated in public. They demonstrate the old maxim about who can dish it out but can’t take it. Even losing in court doesn’t mean conservatives can’t win in exposing seriously awful journalism.