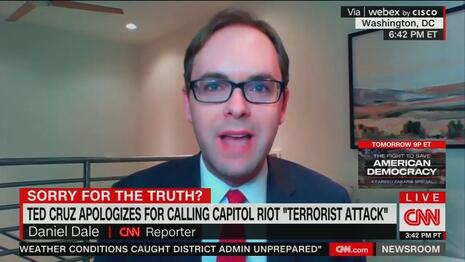 In his newsletter on Monday night, former CNN producer Steve Krakauer criticized the obvious tilt of fact-checkers. For example, "CNN's Daniel Dale, who made a career out of fact-checking President Trump, hasn't turned his sights onto President Biden in more than six weeks."

Instead, Dale is fact-checking claims from Republican politicians who were trying to make a point about voter ID that you actually don't need a photo ID to "buy milk" in D.C. This is "false," Dale argued! No, you just need to show a photo ID in D.C. to go to "restaurants, bars, food halls and food courts, nightclubs, breweries, entertainment venues, exercise facilities and meeting facilities." Grocery shopping, that's different. That's a "necessity," apparently.

In other words, Dale shows up at the scene of a complete liberal Democrat disconnect -- no "Jim Crow 2.0" for requiring ID here --  and tried to spin it away by saying "you're exaggerating."

Krakauer concluded: "Fact-checks have become a fetish for many in the media, and their superfans on Twitter. But these fact-check fails undermine their very purpose - and make the audience more distrustful of the press."

A look at Daniel Dale's actual TV appearances on CNN also show a dramatic tilt. In the last three months of Nexis searching, there hasn't been a Biden check since November 4. But you could find FIVE Daniel Dale segments delving into the January 6 riot around CNN's favorite anniversary, three of them pointing out that Sen. Ted Cruz called it a "terrorist" event, which upset Tucker Carlson. Take this appearance on January 8:

PHIL MATTINGLY: Daniel, Cruz blames sloppy wording for his comment. But this is not even close to the first time Cruz has described the insurrection as a terrorist act, is that right?

When it came to fact-checking Biden, Dale could get incredibly loosey-goosey about what's factual. On October 22, after the last Biden "town hall" on CNN, Dale said

The Washington Post reported today that the motorcade traveled along the border for -- quote -- "a few minutes." So does that count as having been to the border, as Biden said? I guess it's up for people to decide. But I think certainly the president could have been clearer that if this kind of fleeting moment was what he was talking about, he could have told that to the American public.