Politico Editor Sam Stein on Manchin's No to Biden: 'Objectively Devastating for the Planet' 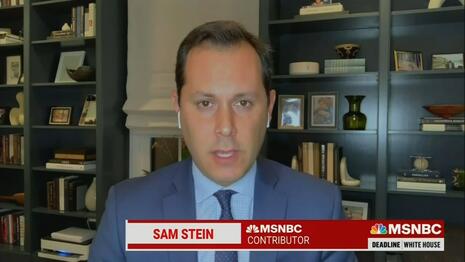 "A lot to process on the Manchin news but, from a substantive standpoint, it's just objectively devastating for the planet. The last best chance at climate change legislation is gone," Stein wrote.

A lot to process on the Manchin news but, from a substantive standpoint, it's just objectively devastating for the planet. The last best chance at climate change legislation is gone

"This tweet is many things but ‘objective’ is not one of them," conservative Washington Post Writers Group columnist Marc Thiessen responded.

Ron DeSantis spokesperson Christina Pushaw added, "Yes, just shocking that a senator who represents WEST VIRGINIA, where so many of his constituents’ livelihoods would be absolutely wiped out by the Green New Deal, isn’t doing what MSNBC/Politico want him to do."

Leftists were demanding a "last best chance" for climate in Bill Clinton's first year. Talk about moving your goalposts of doom.

Stein doubled down: "Some conservative pushback to this, but this is objectively true, unless, I suppose, if you don't think climate change is happening or needs addressing," quote-tweeting the original message.

On Fox News on Monday, Concha called Stein's tweet "hilarious," and added this panicky headline from Washington Post pundit Jennifer Rubin: "Manchin deals a devastating blow to Biden and to democracy." Biden and "democracy" are linked.

Stein also declared it marked a bad December for the president:

After some momentum, an absolute brutal end of the year for Biden.

On the plus side, infrastructure bill kicking in and jobs market solid. But does the latter get messed up by the pandemic?