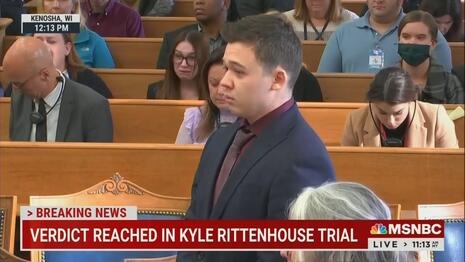 In the latest NewsBusters Podcast, we analyze the breaking news (and bias) around Kyle Rittenhouse being acquitted on all counts in the deaths of two men in Kenosha, Wisconsin during an intense evening of rioting. Typically, Joy Reid offered a cynical take on Twitter: "We knew, but it’s sometimes helpful to remind ourselves how America was designed to work. It continues to work as designed." That is, white people can always kill black people with impunity.

In NBC live coverage, Washington Post columnist Eugene Robinson decried the verdicts as a "vindication for vigilantism." Rittenhouse was guilty of driving "across state lines carrying a military-style assault weapon" to threaten people.

NB Associate Editor Kyle Drennen joins the show to share the latest post-verdict news and to discuss how NBC has made such an example out of a suburban Dallas school district that has resisted critical race theory in the classroom that the Biden Education Department is now investigating them for discrimination (democracy is somehow discriminatory there). He also discusses CBS rolling out the red carpet for Al Franken to return to politics, #MeToo be damned.