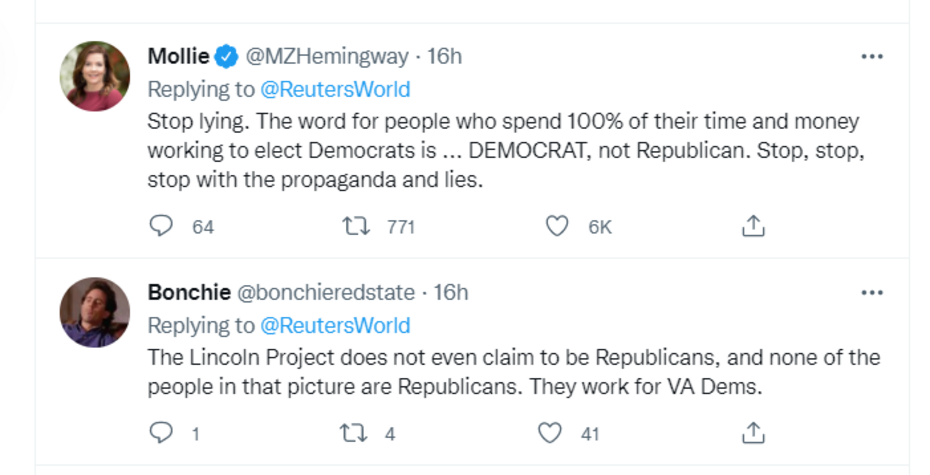 The first paragraph of Kanishka Singh’s story is worse: “A group of mostly Republican critics of former U.S. President Donald Trump claimed responsibility on Friday for a demonstration in the Virginia governor's campaign that recalled an infamous 2017 rally in the state.”

This ignores that the actual stooges posing as Trump supporters identified in the pictures were Virginia Democrats, and that the principals of the Lincoln Project explicitly reject the present Republican Party.

Their website doesn’t identify as Republican: “The Lincoln Project launched with two stated objectives. The first was to defeat Donald Trump at the ballot box. The second was to ensure Trumpism failed alongside him.” The Washington Free Beacon has reported extensive financial and operational ties with the Democrats. 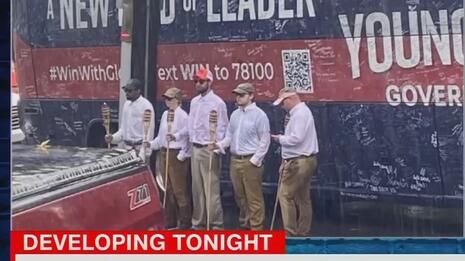 Plus! Fox News has reported the Lincoln Project has spent nearly $300,000 on behalf of the Democrat in this race. “Records provided by the Virginia Public Access Project show $17,100 being spent on pro-McAuliffe efforts and just over $280,000 on anti-Youngkin efforts.”

Unsurprisingly, the Reuters reporter also typically mangled Trump from Charlottesville, saying he was “criticized for initially saying there were ‘fine people on both sides’ of the dispute between neo-Nazis and their opponents at the rally,” ignoring that not everyone who came to protest the removal of Confederate statues was a Nazi, and that the president clarified to reporters he wasn't praising Nazis.

Democrats were only identified in the story as rejecting the stunt, and not as earnestly pushing it on social media on Friday as terrific.

On the Twitter news bar "What's Happening," they pulled the same trick with an AP story. The Twitter thread was stuffed with liberal-media spin, and no conservative or Republican tweets.

At least it didn't say "anti-Trump Republicans," but the AP story also failed to identify the fraudulent torch-bearers as Virginia Democrats, and stuffed the story with Democrats condemning the stunt without noting how they promoted it until it was exposed.

This was a sad Democrat-spinning trend. The Washington Post story lede also said the stunt "turned out to be organized by the Lincoln Project, an anti-Trump Republican group."

The Guardian turned the Virginia-Democrat frauds into "members" of the Lincoln Project. The headline was "Lincoln Project members pose as white supremacists at Virginia GOP event." They claimed "Members of the anti-Trump Republican group stood in front of Youngkin’s campaign bus on Friday wearing white shirts, khaki pants and sunglasses."