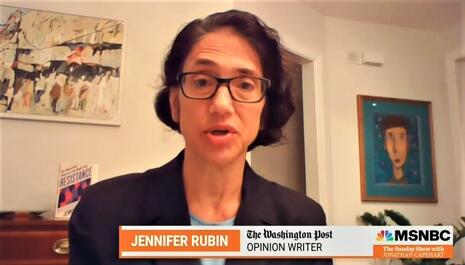 That makes you "distinguished," and not obsequious. Examine the numbers:

Chief of Staff RON KLAIN has retweeted or @ mentioned Rubin more than three dozen times since mid-May. The White House press team, the Democratic National Committee, the State Department, and the vice president’s office have all promoted various columns and tweets from her in recent weeks.

That’s because Rubin usually backs up the administration. In the past month, her headlines included: “Biden delivers straight talk — and wins kudos,” “The State Department deserves more credit for its effort to evacuate Americans from Afghanistan,” and “Why Kamala Harris’s trip to Asia was so important.”

What makes this story amusing is how both Biden allies and Washington Post reporters find Rubin's boosterism embarrassing.

The White House has encouraged outside allies to share some of Rubin’s articles online. One told West Wing Playbook that they declined to do so because they thought it was just too embarrassing to earnestly share a Rubin column, given her history as a conservative and perceived tendency to pander to the administration.

One Post employee said some people in the newsroom are increasingly frustrated that Rubin is parroting the administration's critiques of the media, which they believe emboldens the administration to push back on journalists even further. Two others say they just try to ignore her or don’t read her columns.

An anonymous Post reporter expressed pride in "pretty sharp" stories on Biden policies on immigration and Afghanistan, and "Jen Rubin is not a good representation of the news coverage of The Washington Post. I have been asked before if I hate sharing a newsroom with her... I reply that I don't.”

Then Thompson created a journalism controversy by refusing to accept Rubin's request to protest the story off the record: "On Thursday, we reached back out with our reporting. Rubin responded in an email with the subject line “OFF THE RECORD. Since we never agreed to conduct such an off-the-record conversation, we are publishing it below in full."

In most news rooms, putting "Off the Record" in the subject line would put it Off the Record, but she clearly didn't realize Thompson would play the "I didn't agree" card. She probably should have secured his agreement with her request before she started complaining. Here's part of it (italics hers):

How utterly predictable that Politico would run the zillionth hit piece on a prominent woman, especially one candid in her critiques of Politico's hysterical, clickbait style of coverage. The notion that I am polarizing in a newsroom (as opposed to any of the dozens of other opinion writers) is a "take" only Politico could come up with — by of course running around to ask the question in the first place. I trust the Post's superb news side folks spend zero time thinking about me (as is entirely appropriate).

She also objected to the story appearing on Yom Kippur. Other journalists made fun of this rejection of the off-the-record request by noticing what came immediately after it:

After The POLITICO printed an email from Jennifer Rubin with the subject line "OFF THE RECORD," because "we never agreed to conduct such an off-the-record conversation," came this: pic.twitter.com/5JofmE8vBS