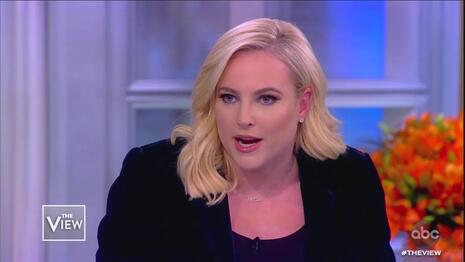 Now that Meghan McCain has exited the stage at ABC's The View, some TV critics are looking back at her tenure. Washington Post TV critic Inkoo Kang concluded she was a feisty asset for the show...as "a highly effective heel, a love-to-hate reality villain who brought a badly needed wild-card energy to the show." To many people to the right of Joy Behar, she was the hero, not the villain.

We were amused as Kang insisted McCain's argument didn't really land while Sunny Hostin was the "intellectual heavyweight" of the show.

We also get into CNN denouncing the makers of Jeopardy for a selecting a white male from within -- that was "so, so wrong." Even adding actress Mayim Bialik to the hosting mix was panned by CNN.

Brian Stelter's recent podcast with Kelly McBride, NPR's Public Editor, demonstrated that liberals think that conservatives don't really count as the "public," and they aren't to be humored when they criticize your network. Their criticism is automatically "disingenous." That's an interesting deal as NPR and PBS take our tax dollars and smear us with it.

Enjoy the latest episode below, or wherever you listen to podcasts.