When CNN's Oliver Darcy takes the wheel of their "Reliable Sources" newsletter, it seems to begin with a raging editorial. On Friday night, it came under the headline "How Fox race baits." That's interesting. This came about 24 hours after CNN's Don Lemon suggested to President Biden the Republicans wanted to make black voters count jelly beans before they could vote.

Darcy's theory was Tucker Carlson wasn't the only horrible race baiter at Fox:

While Carlson engages in bald-faced race baiting, Fox as a network also works to cater to the fears of White America. And programming in that vein has increased recently, engraining itself into the channel's core DNA.

Fox understands the panic rippling through White America — it should, it helped create it — and exploits it for profit. Instead of using its platform for good-faith discussion and debate about race, the network chooses to demonize those seeking to have it. It presents a terrifying world to viewers and then tells them, repeatedly, that it is the only entity in society standing up to the nefarious forces that seek to destroy their way of life. This is the subject of my latest story for CNN... [Emphasis his.]

Darcy used the Left's official leading Fox-banning organization to claim Fox was over-covering critical race theory in our schools. His partner in censorship was NAACP president Derrick Johnson, as he quoted: 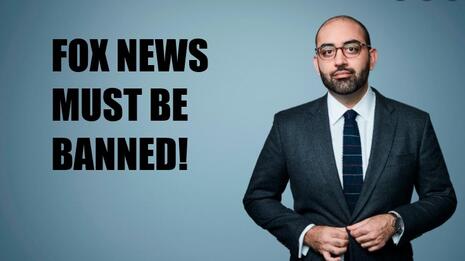 "They play to the lowest common denominator of white fear," Johnson said of Fox. "They peddle fear at a level that causes harm to communities. ... They peddle fear starting from the morning shows and all throughout the day."

"I wish it could get banned, quite frankly," Johnson said. "Because it creates more intolerance and more racial instability."

Johnson also claimed "If you think about the average person who consumes Fox News, their sense of reality is disconnected from facts...It is disconnected from allowing different people to exist." Now let's revisit Mr. Reality's public statement on January 29, 2019 on actor Jussie Smollett's fake hate crime:

“The recent racist and homophobic attack on acclaimed actor and activist Jussie Smollett is troubling. The rise in hate crimes is directly linked to President Donald J. Trump’s racist and xenophobic rhetoric. It is dangerous for any society to allow a tone of divisiveness and hatred to dominate the political discourse."

Naturally, Darcy also pointed out Fox's audience is overwhelmingly Caucasian: "When watching Fox, it's worth remembering that most of its audience is made up of one racial group. White people made up 94% of Carlson's audience from January 1 to July 7. Only 2% were Black. For comparison, over the same six-month period, CNN's 8 p.m. hour had an audience that was 25% Black and the audience for MSNBC's 8 p.m. hour was 27% Black. Both of those audiences were 66% White."