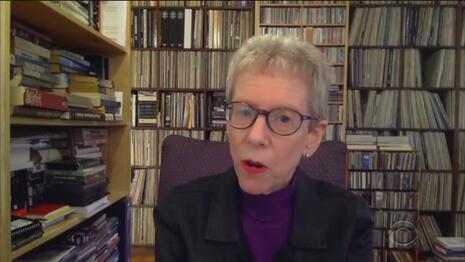 On Thursday, the NPR talk show Fresh Air with Terry Gross devoted 36 and a half minutes to bashing the Republicans for “politicizing” elections, as if the Democrats never do that. Her guest was New York Times reporter Nick Corasaniti, and the online headline was “Voting Restrictions Are Further Politicizing U.S. Electoral System, Journalist Says.”

TERRY GROSS: My guest, Nick Corasaniti, has been reporting on what he describes as how the Republican Party is attempting to lock in political control for years to come by pushing through new laws to restrict voting access, limit ballot initiatives that could undermine Republican goals and stiffen penalties for poll workers and election officials who make even minor mistakes. At the same time, Republican lawmakers in at least eight states controlled by Republican legislatures are trying to remove the powers that secretaries of state, governors and nonpartisan election boards have over how elections are run. He says these efforts could further undermine the country's democratic norms.

Terry Gross, who accepted a medal from President Obama, asked softballs about the evil Republicans: “In one of your articles, you described Georgia's new voting law as having a breathtaking assertion of partisan power in elections. What makes it breathtaking?”

Nowhere in this half hour was any discussion of Democratic Party machinations during 2020 to make the election environment as favorable to their victory as they could possibly make it. Of course, part of that system is maintaining taxpayer-funded public TV and radio to echo Democratic Party talking points.

That starts with the constant allegation of racism. They ignored that voters of all races favor asking voters for ID:

CORASANITI: Well, there's a few, and it varies from state. But there's long been studies that prove that certain additional voter ID laws often impact communities of color at a disproportionate level than, say, white voters. I think it was a study in 2018 -- I know it was in The Atlantic -- found that Black and Hispanic voters were three times as likely than white voters to say at polling stations that they lacked the proper identification, so being turned away for not having proper ID. So there's a long history of voter ID being used as a way to block access to voting in communities of color.

The interview ended with Gross touting how Corasaniti has argued "these efforts to restrict voting and to limit ballot initiatives and cut the powers of secretaries of state and punish poll workers, that these efforts can undermine our democracy and undermine the country's democratic norms and threaten the fairness that is the bedrock of American democracy. And I'm wondering if you got any pushback about writing that from editors at the paper."

Corasaniti praised his bosses: "I think we've been pretty consistent even before the 2020 election, you know, in our coverage of efforts to restrict the voting....that when there are these attacks on voting, regardless of where they're coming from, it's really an attack on American democracy and small-D democratic norms. And so, no, I didn't get any pushback from my editors."