NY Times Claims Fox Is Lurching 'Trumpward' and Dumping 'Dissenters'...And CNN Is What? 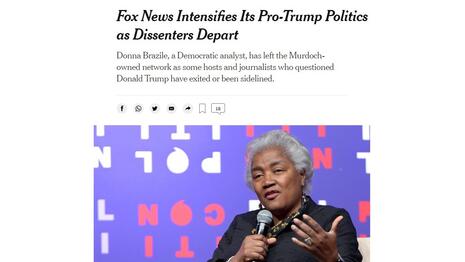 New York Times media reporter Michael Grynbaum is projecting bad publicity into one cable-news network for narrowing the diversity of its opinions. Rick Santorum’s firing at CNN? Don’t be silly. The headline is “Fox News Intensifies Its Pro-Trump Politics as Dissenters Depart.”

Nobody at Fox is being fired after Twitter lobbying campaigns. Grynbaum sounded like former Times media reporter Brian Stelter: “Onscreen and off, in ways subtle and overt, Fox News has adapted to the post-Trump era by moving in a single direction: Trumpward.”

For seven years, Juan Williams was the lone liberal voice on The Five, the network’s popular afternoon chat show. On Wednesday, he announced he was leaving the program, after months of harsh on-air blowback from his conservative co-hosts. Many Fox News viewers cheered his exit on social media.

Donna Brazile, the former Democratic Party chairwoman, was hired by Fox News with great fanfare in 2019 as a dissenting voice for its political coverage.

Grynbaum quoted Brazile: “Fox never censored my views in any way,” she wrote in an email. “Everyone treated me courteously as a colleague.” Ms. Brazile added: “I believe it’s important for all media to expose their audiences to both progressive and conservative viewpoints."

CNN and MSNBC don’t really believe that. The only Republicans (or ex-Republicans) they like are Trump-trashing Republicans. Brazile is leaving for ABC. Williams is staying with Fox, just not co-hosting The Five. Grynbaum offers no proof that The Five won’t have a liberal panelist, or that Fox won’t hire a Democrat analyst to replace Brazile. 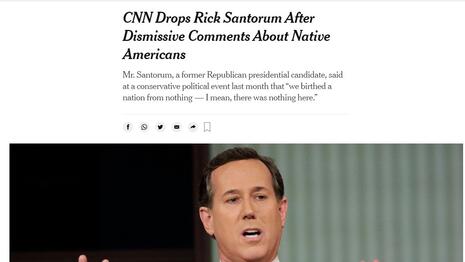 Now compare that to the Times story on Santorum getting canned, by breaking-news reporter Jesus Jimenez, The headline was “CNN Drops Rick Santorum After Dismissive Comments About Native Americans.”

That's nowhere close to “CNN Intensifies Its Pro-Biden Politics as Dissenters Are Fired.”

The Jimenez story began with CNN confirming that Santorum was canned, what Santorum said that got him canned, and Santorum’s statement after he was canned. The rest of the story was angry leftist racial lobbyists like Fawn Sharp of the National Congress of American Indians:

The story said absolutely nothing about CNN sending its “dissenters” packing and squashing its diversity of opinions. No one cared if CNN would bring in another conservative to replace Santorum...because the New York Times likes it when the liberal Twitter mob wins.